This time, the target was failed US Senate candidate Roy Moore. The former Alabama chief justice eventually stormed out of a mock interview with Baron Cohen, but not before he was humiliated with a fake "paedophile detecting machine".

Moore narrowly lost his bid for Congress last year after The Washington Post published allegations of sexual misconduct with a teenager, an accusation Moore has denied.

Monday's episode of Who Is America?, available on Stan, featured an interview between Moore and Baron Cohen (in disguise as Israeli anti-terrorism expert Erran Morad). During the meeting, the comedian claimed Israel has developed technology to detect sex offenders and asked if such a thing could be introduced into American schools.

"It turns out sex offenders, and in particular paedophiles, secrete an enzyme called BDHD which is actually detectable," Baron Cohen said before producing what looked like a metal detector. "It is three times the level of normal perverts. So the phrase 'sweating like a rapist' is actually based on science." 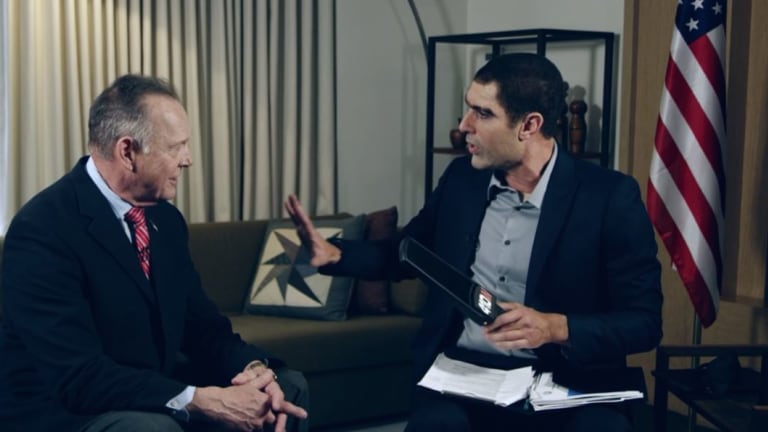 Roy Moore, left, on Who is America?

The comedian then tested the wand on himself to show that it made no noise. However, when he passes the "paedophile detecting machine" over Moore's jacket it makes a loud noise.

"I've been married for 33 [years]," Moore said in response. "I've never had an accusation of such things… I'm certainly not a paedophile. Okay? Maybe the Israeli technology is faulty."

After an awkward back-and-forth during which the baton keeps beeping, the Republican decides to walk out of the interview.

"I am simply cutting this conversation right now," he said. "Thank you. I support Israel, I don't support this kind of stuff."

Moore has since threatened to sue Baron Cohen over the televised prank. In a statement, he has described the interview as "a defamatory attack" on his character involving "trickery, deception and dishonesty".

The former Alabama chief justice isn't the only person to be targeted during the third episode of the controversial satire. Halfway through the show, Baron Cohen manages to convince two Donald Trump supporters to throw a fake birthday party in the hope of catching illegal immigrants.

Eventually, two policemen attend the scene responding to concerns the men may be trying to lure underage girls. The camera hovers awkwardly as one of the Trump supporters, dressed in drag, is unable to explain why they are carrying condoms, lubricant and tranquiliser.

Baron Cohen has targeted controversial Republican politicians in the past. Last week, Georgia-based representative Jason Spencer was shown dropping his pants and screaming the n-word, and he subsequently resigned.

Stan is a joint venture between Fairfax Media, which publishes this website, and the Nine Network.