Sylvie’s Love is a period drama about young Black people in the late ’50s and ’60s, but whereas most Hollywood movies would tell their story against a backdrop of the Civil Rights Movement or otherwise highlight the adversity faced by Black people of that time, this is “really trying to tell a story that didn’t have any sort of political anything,” star Nnamdi Asomugha tells ET. “It’s just a romantic story.”

“Where the only strife is interpersonal strife,” Tessa Thompson adds.

The latter stars as Sylvie, a woman dreaming of working in television and struggling to make her voice heard in times that are a-changing. Asomugha plays Robert, a jazz musician who hopes to make it big but who’s stuck working part-time in Sylvie’s dad’s record store. A friendship sparks romance and though life takes them in different directions, a chance encounter years later will give them a second chance at love.

“We just don’t have enough great love stories that exist for us,” Thompson says, explaining that writer-director Eugene Ashe “was really inspired by films in the tradition of The Way We Were and The Notebook, all these epic love stories. You look and we don’t exist in those narratives, so it’s pretty incredible to get to play that. It’s a joy for me every day, because I get to be in love.” 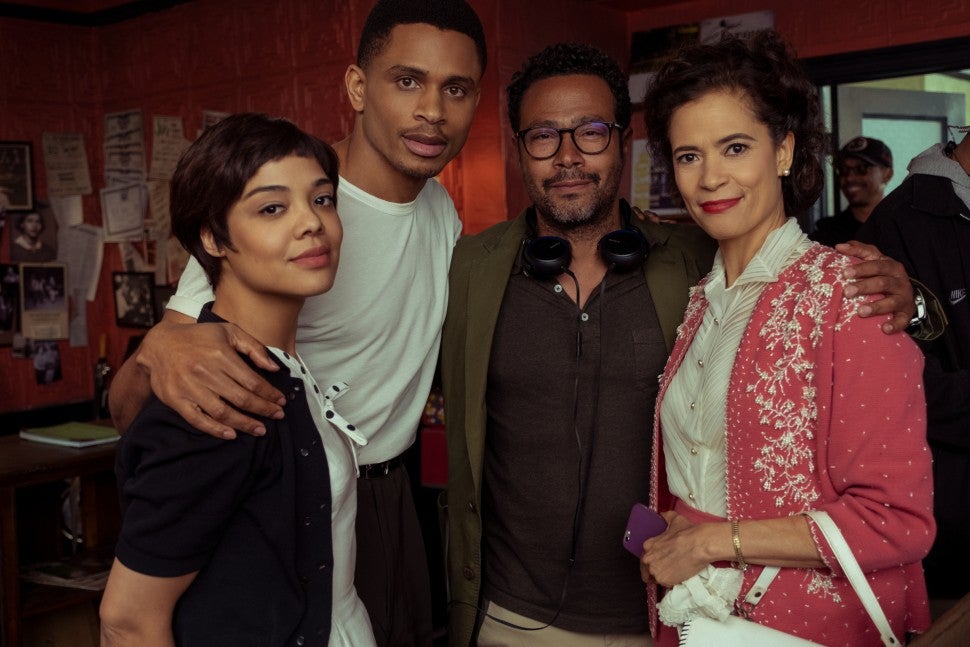 Sylvie’s Love marks Asomugha’s first lead role in a movie after retiring from the NFL in 2003. He discovered a passion for acting and broke out in the 2017 drama Crown Heights, which was the performance that inspired Ashe to cast him here. “Yes, you find work after football,” Asomugha grins.

To play Robert, he committed to learning to play the saxophone. “When I was six, I played the clarinet for, like, three months,” he admits of the extent of his musical abilities. Yet, “Before we shot, I told Eugene that, ‘I will be playing the saxophone. I want to have credits at the end and make sure that I was playing.’ That’s what I wanted, so I learned it. I can’t play that well anymore, but when we were shooting, I could play.”

“Sometimes we’d be in the hair and makeup trailer and hear him outside practicing,” Thompson says. “You sound good, though.”

Thompson, meanwhile, was coming off such movies as Avengers: Endgame and Men in Black: International when she arrived to the set of Sylvie’s Love. And though Sylvie may battle fewer comic book villains than Valkyrie, Thompson considers her just as badass in her own right.

“She’s a woman that’s defying convention. She decides from a very young age she’s interested in producing television and as a Black woman, that was unfortunately not done at that time,” she says. “And she manages to do it. So, I see her as just as badass as any woman in a cape or throwing punches, if not more. To me, she’s extraordinary in how ordinary she is. There’s so many incredible women across the world who do big things every day and that’s the spirit with which I celebrate Sylvie.”

Thompson will next return to the Marvel Cinematic Universe for Thor: Love and Thunder, which she says will be “very, very funny and actually very touching” and which will begin filming in the new year.

“Are there any roles still left to be cast?” Asomugha chimed in with a grin.

The supporting cast of Sylvie’s Love includes Aja Naomi King as Sylvie’s cousin Mona, Tone Bell as bandleader Dickie Brewster and Ryan Michelle Bathe as Kate, a Black woman who’s made it working as a TV producer in the ’60s. (Eva Longoria and Jemima Kirke also co-star and perform their own musical numbers.)

“It’s just really special to me to be inside of an ensemble with a mostly all-Black cast and to get to celebrate that,” Thompson says. “We talk about the Harlem Renaissance, I feel like there’s a renaissance happening right now in terms of Black Hollywood, with all the folks that are really speaking to the multitudes that we have culturally. We’re not a monolith. There are so many expressions of Blackness. So, it’s exciting to get to work at a time like that and to be making a movie that celebrates a time when there was a real rich community of Black folks not just in Harlem but in cities across America.”