From the start, filmmaker James Gunn had a vision for “The Suicide Squad”: this thing had to be rated R. While Gunn is best known to most audiences for his successful Marvel franchise “Guardians of the Galaxy” — which, like all MCU films, are rated PG-13 — his early features like “Slither” and “Super” are decidedly R-rated outings. When Gunn moved over to Warner Bros. to write and direct one of the studio’s DCEU films after being fired (only to later be re-hired) by Disney, he was understandably looking for a bit of freedom. That included an R rating for the superhero sequel, which more than earns it, thanks to “strong violence and gore, language throughout, some sexual references, drug use, and brief graphic nudity.” The usual stuff.

As Gunn explained, the R rating was baked in from the start, long before he even signed on to direct the film as well. “It was simple. I was writing the screenplay, and I talked to Peter Safran, who’s the producer and my manager, and I like, ‘I think this thing’s going to be rated R. I have to know that they’re cool with me writing a rated-R script,’” Gunn told IndieWire during a recent interview. “And, at first, I had only committed to writing it. I didn’t commit to directing it, because I wasn’t quite ready to make such a long-term commitment.”

Gunn’s reasoning for why a superhero film that had already gotten one PG-13 outing, care of David Ayer’s 2016 “Suicide Squad,” was simple enough: this is a war film, and it needed to feel like one. The film reunites original stars Margot Robbie (as Harley Quinn) and Joel Kinnaman (as leader Rick Flag) with some new baddies who are drafted into service — including Idris Elba, John Cena, David Dastmalchian, Daniela Melchior, and Sylvester Stallone — when the United States opts to use their skills to infiltrate a foreign country.

“I said, ‘It’s going to be rated R because it’s like a war film.’ I have a big aversion to war films or gun films where people are getting shot and they’re getting thrown back and it’s [just the] impact, but no real repercussions to the violence,” he said. “I hate that kind of stuff, and I’m like, ‘The only way I can do this and not have it be rated R is if I have them fighting a bunch of robots or something, and I don’t want to make a movie with a bunch of robots, I want to make a war film.’ They were like, ‘Okay, you can write it rated R.’”

Gunn, the sole credited screenwriter on the project, eventually signed on to direct it as well, but that came with two conditions: it definitely had to be rated R (not snipped down from his screenplay), and he needed to shoot it close to home. Warner Bros., he said, “hated” both of those conditions, though they soon acquiesced to the filmmaker’s needs. 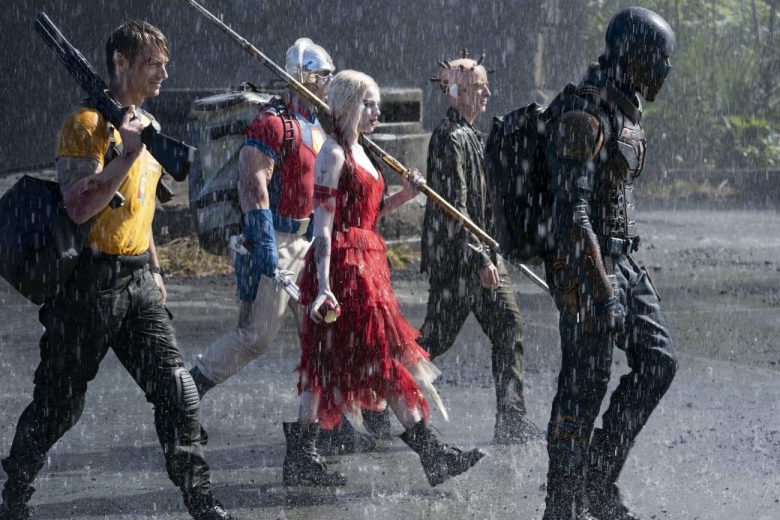 “When I was finished with it, then they asked me to direct it, and I said I’ll do an under two conditions, and they were both conditions they hated,” Gunn said. “One of which was, it needs to be rated R. The other was which I needed to shoot in Atlanta, Georgia, because my father was dying and he lived in St. Louis, and they wanted to shoot in the UK. I couldn’t be that far away from my dad. The UK one was actually the bigger [condition], because it’s a lot more expensive to shoot because of all these tax things in the United States. But those were my conditions. But they said yes, and they were fantastic. They just really let me do my thing.” (Gunn’s father passed away a week before he started shooting the film in Atlanta.)

While the Marvel Cinematic Universe has yet to mount an R-rated entry (“Deadpool” doesn’t count), the DCEU has moved into more adult territory in recent years. Zack Snyder’s “Batman v Superman: Dawn of Justice” arrived in theaters with a PG-13 rating, but an Extended Cut available on home video is rated R. Todd Phillips’ hit “Joker” is rated R, but even Phillips has said it took him a year to convince Warner Bros. to go for it. By the time Gunn and crew were in production, the recently released “Joker” was already proving itself to be a success. That helped.

“‘Joker’ came out after we were already well into our thing and well into shooting, and so that was a really good thing to happen for me,” Gunn said. “It took away a little doubt in terms of how well an R-rated movie could perform.”

Gunn delighted in the freedom of both writing and directing an R-rated superhero film, which included sequences both ridiculous and horrifying. “King Shark ripping a guy in a half never seemed like a big deal because it’s so over the top,” Gunn said. “Harley slitting a guy’s throat, that’s truly hardcore. There were a lot of questions about that, in my mind, but again, it worked that way. When I saw that gag for the first time, I was like, ‘Oh my God, that’s so, so violent.’ But I’m like, ‘I can risk by not doing something or I can risk by doing something,’ and I think in this movie, I always chose to risk by doing something.” 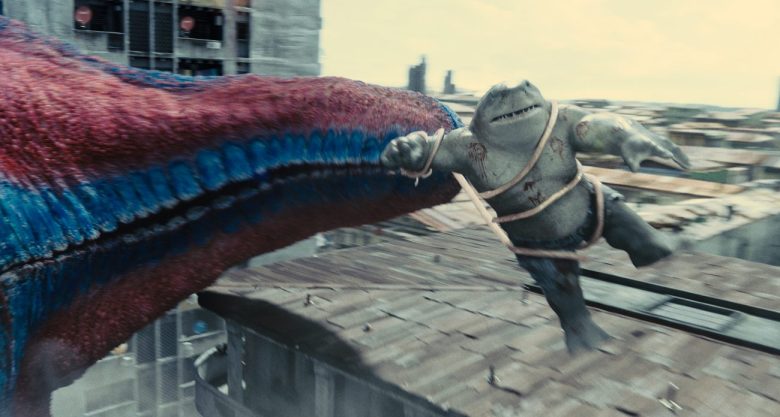 The rating isn’t just due to the violence, Gunn acknowledged with a laugh, there’s also the nudity aspect of it all. “We see lots of penises, but not much female nudity, which I think is funny,” he said. “That’s one of the reason why we got an R rating.”

Next up for Gunn: a return to Marvel, as he readies to rejoin the fold to direct the third “Guardians of the Galaxy” film, scheduled for 2023 release. Asked if he thinks Marvel will ever produce an R-rated MCU film, he was adamant, but don’t expect “Guardians” to go that route.

That doesn’t mean that Gunn doesn’t have some ideas for the kind of R-rated MCU feature he’d like to make, like a Drax the Destroyer spinoff that goes fully crazy, but he’s busy reveling in “The Suicide Squad” for now.

“I could go off and make a Drax movie that’s R-rated, that I would love to do, like barbarian Drax,” Gunn said. “But the ‘Guardians’ movies are fables, and I don’t think of them like that. I don’t write them like that. It’s a different type of movie, and you can have some gore and some scary darkness in there and things like that, which is good, but it’s not the rock and roll of ‘Suicide Squad.’”

A Warner Bros. release, “The Suicide Squad” will be available in both theaters and streaming on HBO Max on Friday, August 6.