In between filming Seasons 5 and 6 of “Better Call Saul,” Rhea Seehorn had no way of knowing that she was prepping for not one, but two Emmy-nominated roles at the same time. That down time away from her work on the beloved AMC show gave her the chance to be part of the team behind “Cooper’s Bar,” a six-episode short-form show airing on AMC+ about a backyard hangout spot that becomes part of a studio development bidding war.

“We did all that work on hiatus, then continue to have a couple of Zoom meetings throughout Season 6 of ‘Saul’ so that the second I got back, we could do some physical production prep, and then go ahead and shoot it,” Seehorn said. “The majority of the people that are on ‘Cooper’s Bar’ are friends of mine, and we just wanted to do something together. So we had a blast.”

“Cooper’s Bar” is a Hollywood satire rooted in a love for following your passions for authenticity’s sake. Louis Mustillo stars as Cooper Marino, a working comedy actor who hosts his misfit buddies at the bar behind his house. No-nonsense TV exec Kris Latimer (Seehorn, in a role that nabbed her an Emmy nom for Outstanding Actress In A Short Form Comedy Or Drama Series) shows up in Cooper’s backyard and stumbles into the eventual idea of doing a show based on his life.

The series was born from the stuff that Hollywood dreams are made of: friendships in unlikely places. Seehorn, Mustillo, co-star David Conolly, and executive producer/director Hannah Davis-Law were all members of the same LA-area Armenian boot camp class. After becoming workout friends who bonded over their shared connections to the industry, they had tossed around the idea that they could all work on a project together.

Gradually, as they talked about time spent in the actual bar outside Mustillo’s house, they arrived on the idea of building a project around this location and loosely basing it on their own triumphs and setbacks in the city. Whether more general (drawing on pitches with entertainment execs) or literal (Cooper’s false alarm collapse in the pilot), the story started to grow out of what the group of friends had experienced in the place that would one day serve as the “Cooper’s Bar” set, too.

The idea first coalesced into a short, co-written by Conolly and Nick Morton. Like the eventual series, the group made the short in Mostillo’s backyard, which features a full, working bar decorated in souvenirs and trinkets from Mustillo’s travels. Even before turning the area into the title location of a metafictional short-form series, it was a place where this group of friends had let off steam and had their own Hollywood heart-to-hearts.

“Dave was like, ‘We should do something like that with Lou’s bar. You should come over and meet Lou and see this bar.’ And honestly, I was like, ‘Dude, a backyard bar is not a show. That’s just a place where people hang out,’” Morton said. “But then I sat down with Dave and Hannah and just listened to them tell stories about things that had happened in the bar over the years. We married that with all of our Hollywood dreams, and how relatable it is, that kind of longing and fear that it’s never going to happen.”

Welcoming an entire crew into your backyard for a week’s worth of filming isn’t always an automatic “yes,” but Mustillo was on board with the idea, and the ball got rolling. The original “Cooper’s Bar” short appeared in virtual 2020 festivals, including SXSW and as a pilot at SeriesFest. AMC’s desire for short-form content made “Cooper’s Bar” an ideal candidate to build out into a longer season arc.

The writing process continued up through this past spring, with the creative team all involved in helping shape how Cooper and his friends fight to keep creative control over Kris’ objections. Cooper’s rant in Episode 2 became an encapsulation of the show’s view on authenticity. In the final version, it’s a virtuous screed against cauliflower wings, but like plenty of other things in the show it didn’t start out that way. The season was shaped by real experiences that Mustillo and this group had from entire careers’ worth of experiences.

“When Lou gives his big speech about Buffalo, that was originally a bagel,” Morton said. “We got really pretty deep into the scripts before Lou said, ‘No one in Buffalo really eats bagels. It should be chicken wings.’ That’s the beauty of working with people who are actually really collaborating, we get like so many great ideas from everybody.”

Scripts in hand, the crew set out on a nightly race against time, filming roughly an episode a day. As a creative team, they decided to follow the style of the short. The resulting rigid schedule of camera setups and lighting schemes meant making sure that each of the directors (Seehorn, Davis-Law, Morton, and original short director Alfredo de Villa) worked together to plan out their episodes, which lead to some other forms of pre-shoot prepwork to ensure that nothing fell through the cracks.

“There was a lot of line rehearsal. People barely got two takes, sometimes three if something technically went wrong. But you do have to know your stuff backwards and forwards,” Seehorn said. “We also had a full day where we showed up with our DP Kimo Proudfoot and a few of his crew people and all our directors came onto the set and loosely blocked it. It was a learning curve and we all decided together that we were gonna support each other. Sometimes it’s gonna get a little sticky. But we’re here to learn and lift each other up.” 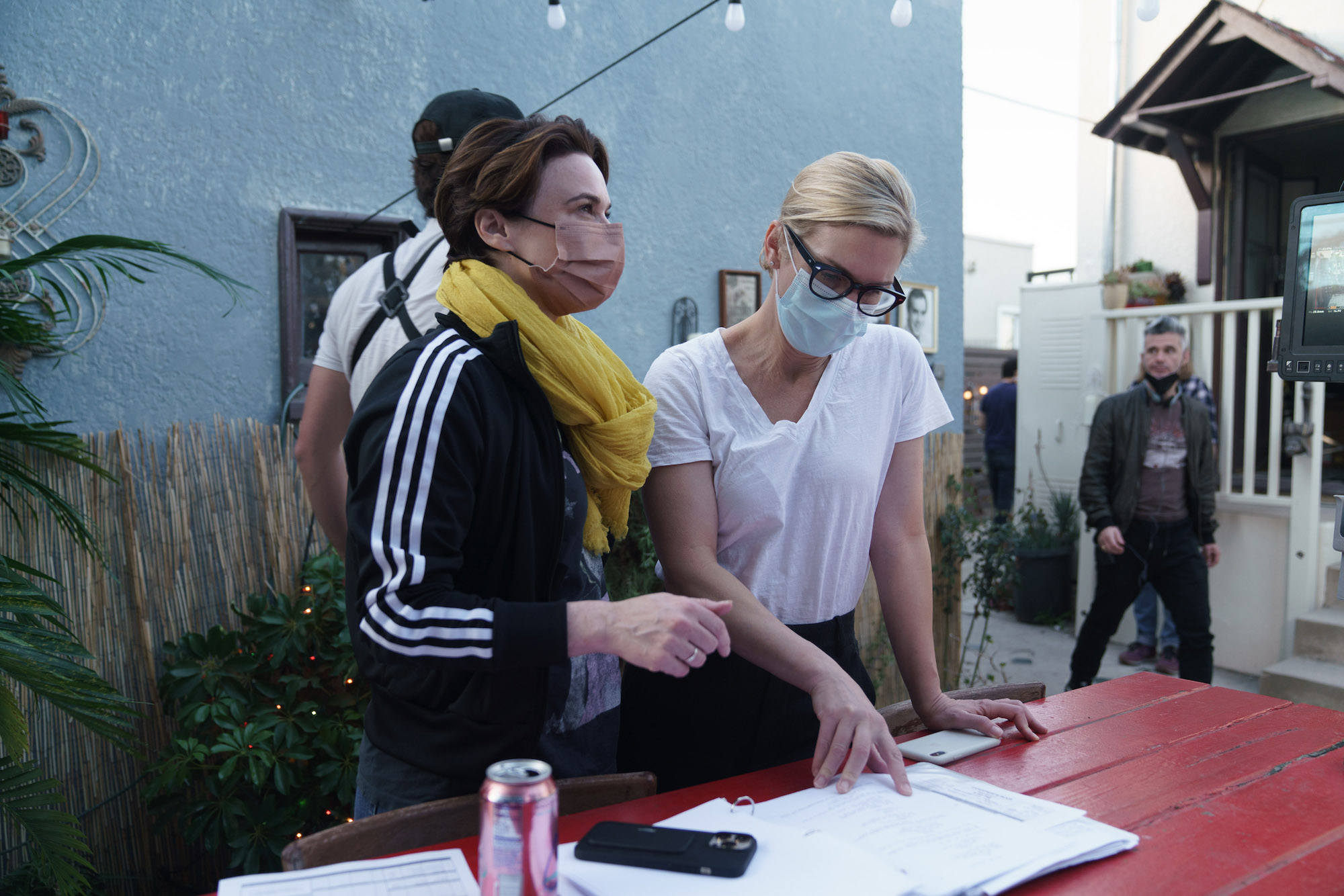 “Every director got everything in the can. Which is mind-blowing, because I think a lot of us have amnesia of what did actually happen between 2 a.m. and 6 a.m. There’s the point where the sun is really rising and that’s your alarm bell ringing. But all of the actors, everybody just stayed on set all the time. People were seconds away,” Davis-Law said.

It became an effort that not only required everyone on the crew to be on top of things during production but rearrange their lives for the hours in between.

“I moved into my garage, because I slept in the daytime,” Seehorn said. “I couldn’t expect my kids and my fiancé to tiptoe around the house. So I moved into the garage and slept on a fold-out sofa and felt like a teenager. I had all the windows closed and everything. I would see them leaving for school and I was coming home.”

After doing the season with no guarantee of what might come after, the group left “Cooper’s Bar” with some loose ends open for a potential Season 2. News came earlier this month that AMC had renewed the series. Production hasn’t started on the new episodes yet but given the tight turnaround (the first season filmed in March before being released not even three months later), there’s an added benefit: they’ve been gathering potential material the whole time.

“The idea was, by the end of every episode, these characters hadn’t got the thing that they thought they were gonna get,” Conolly said. “They go, ‘Great, we’re gonna make a show!’ And you just know that it’s gonna go wrong. There’s no way they can pull it off. But I think we want them to think all the time, ‘Maybe next week.’”

“That ties into the reality of making these things,” Davis-Law said. “You’re like, ‘I got the job!’ And then it’s, ‘Oh. I got the job.’ It’s so much more difficult than the dream. I think that that’s the reality of it, anyway. We’re so meta, we’re literally writing the process. Why not?”

“Cooper’s Bar” is available to watch on YouTube and AMC+.