This week's episodes of The Bachelor appear to have a theme: Take on "villain" Romy, and kiss goodbye to a shot at love with Nick "Honey Badger" Cummins.

At the top of the episode, we discover that Queensland brunette Rhiannon, 28, has scored the single date with Cummins. They're going up in heart-shaped hot air balloon together – a pretty romantic date no matter which way you slice it.

Unfortunately for all involved, Cummins has dropped some subtle comments that he sees Rhiannon as a mate… and not much more. Accordingly, their date is nice, but there's a distinctly platonic vibe to it.

When they're chatting on the couch after their balloon ride, Cummins asks Rhiannon why she gets nervous when he looks at her (a question that's bound to help out with a case of the nerves).

She tells him it's to do with his nice eyes and that's enough for Cummins to decide he needs more time to get to know Rhiannon. 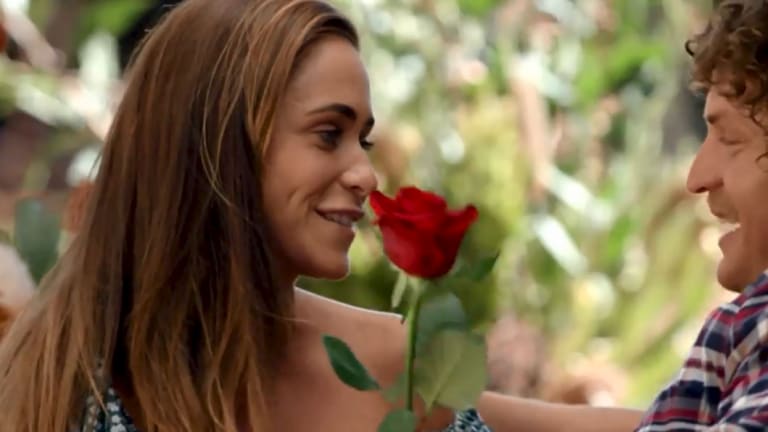 Things went downhill for Rhiannon and The Bachelor from here.

He gives her a rose and a kiss on the cheek (we know what that means), and then Rhiannon  – the most relatable woman in this entire show – comes down with a serious case of word vomit.

It's hilarious – but not for poor Rhiannon, who is mortified afterwards.

Cummins doesn't quite know how to answer, so he just pulls her in for a hug. Rhiannon holds it together for the rest of the date, but starts to cry during a debrief with a producer afterwards. 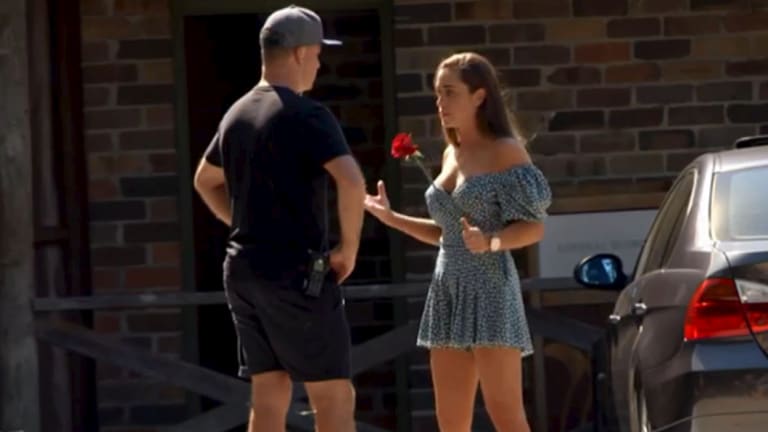 Not a fourth wall in sight during Rhiannon’s chat with a producer.

The remainder of the episode, the sixth of the season so far, is dedicated to a camping trip the Bachelor has organised for six of the bachelorettes.

Romy, Shannon, Alisha, Brittany, Cass and Vanessa are the lucky ladies and they look chuffed about it – until he tells them one of them will be eliminated from the show at the end of the trip.

Honestly speaking, the camping trip is a bit of a snooze fest. There's some swag popping, some quad-biking, some cooking on an open fire… but most of the drama from the trip comes two of the women in partcular: Romy and Vanessa.

After clashing in the first few episodes of the show, Romy seems to have decided Vanessa is her mortal enemy, and will now stop at nothing to have her eliminated from the show.

Vanessa, meanwhile, does not particularly care what Romy thinks, says or does, in any capacity.

"I’m not here to bond with Romy, I’m not here to be friends with Romy," she says to the camera ahead of the camping trip. "I could f—ing care less about Romy and her opinion of me. Not everyone in life is going to love her and bow down to her, and I sure as f— am never going to do it."

Strong words, but potentially deserved ones when you consider what Romy did next.

"Vanessa Sunshine’s gotta go," Romy says to the camera. "She's expired, her time’s up. She’s gotta go. I feel a responsibility to tell [Cummins] the truth about Vanessa Sunshine, so Nick can finally get rid of her."

Then, instead of using her private time with Cummins to build on their own potential connection, Romy goes straight for the jugular.

"I hate the whole 'throwing someone under the bus' but considering we have a rose ceremony tomorrow, I just think it would be awful for the wrong person to go home," Romy told Cummins. "If I was to question anyone’s intentions, it would be Vanessa's. Vanessa Sunshine, actually. Something a lot of us overheard her saying… She just said that she wasn't sure she was attracted to you." 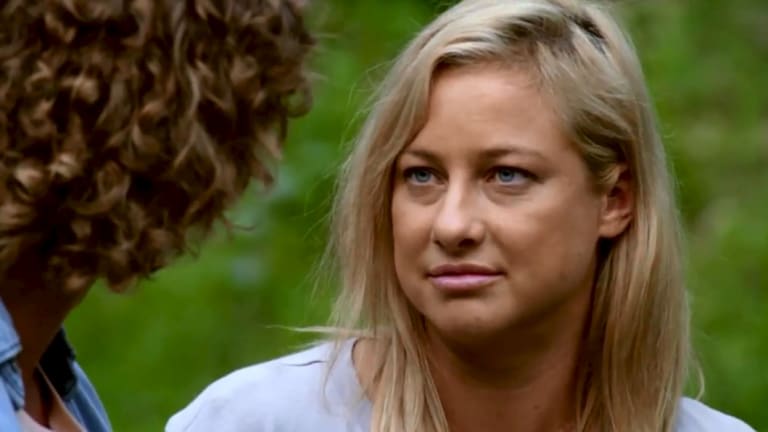 Romy’s chat with Cummins became all about Vanessa.

When Cummins tried to suggest Vanessa might be attracted to people in different ways than Romy, she cut him off.  "The question was, 'Are you physically attracted to Nick?' It was a pretty direct question. And she couldn't answer it."

To take Romy’s own words from Wednesday’s episode: Lady, mind your own business.

When Cummins later pulls Vanessa aside to ask if she is or isn't attracted to him, she stuns the guy by saying that, actually, she needs to get to know someone better to decide if she likes him or not (crazy, eh?).

"I kind of get where [Romy] might have thought that from, and it happened on the arrival night," Vanessa explains, going on to re-enact her reaction to seeing Cummins for the first time. "Like, 'Who's this dude?' Blonde, curly mullet… with this curly moustache. I'm like, 'Oh. Okay, maybe he’s open to a little makeover or something'." 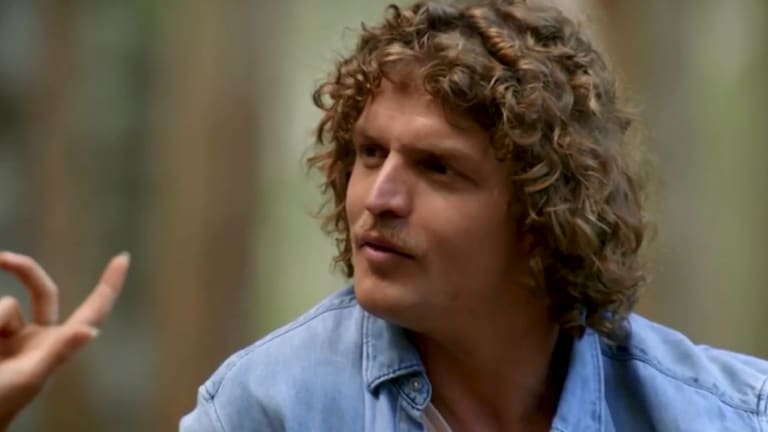 Honey Badger's face, as he realises Vanessa really isn't that into him, is a scream – but he takes it all on the chin.

"So hillbillies aren't your thing?" he asks.

They laugh and move on, but you just know that Vanessa – with a lot of help from Romy – has sealed her fate.

"She’s not feeling the Badger vibes," Cummins summarises to the camera after their chat. "Fair enough, there's someone out there for everyone."

In happier news, Cass – who is very much feeling the Badger vibes – gets a bit of unexpected one-on-one time with Cummins. He pulls her aside for a chat and things go… really well, actually. 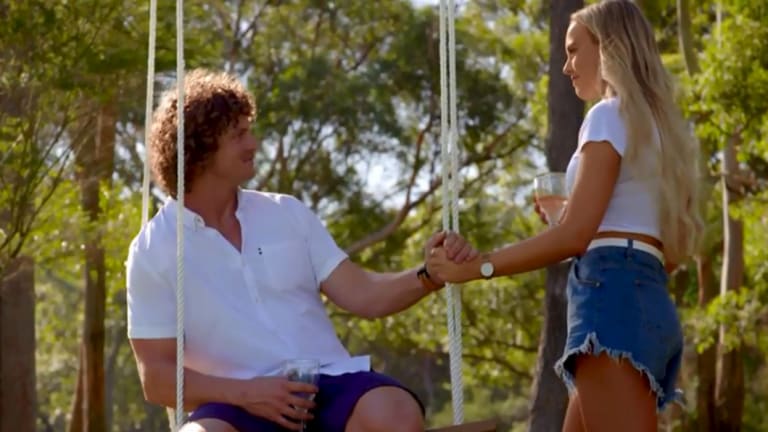 Cummins finally picked Cass for some one-on-one time – and she was thrilled.

For the first time, we see a glimpse of reciprocation from Cummins, and we'll be damned if he doesn't have a soft spot for the woman. Plus, they look like they belong in a Ralph Lauren commercial together – surely that says something for their chances?

When it comes time for the rose ceremony later in the day, there's not all that much suspense in it. We know Vanessa's not that into the Bachelor, and he knows it too – so it comes as little surprise when she's left without a rose.

Somehow, we don't think Vanessa cares all that much.