Sixteen men have been found alive inside a sealed lorry trailer heading to Ireland from France on board a ferry.

The men, believed to be from southeast Asia and aged between 20 and 40, were discovered in the sealed trailer on Wednesday night on board a Stena Line ferry from Cherbourg to Rosslare, in southern Ireland.

The shipping company said the men were found after a staff member heard knocking coming from the container during an inspection some time after 9pm. 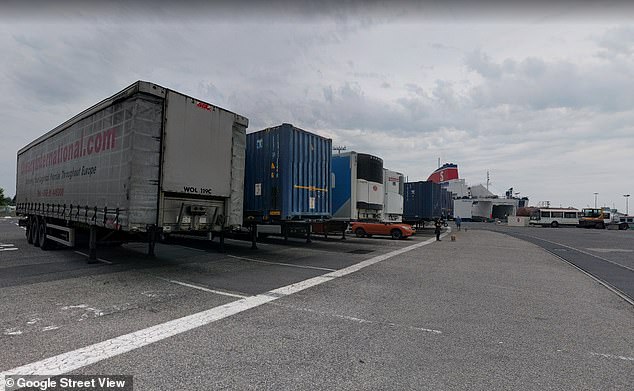 Sixteen men, believed to be from southeast Asia and aged between 20 and 40, have been discovered inside a sealed container headed to Ireland from Cherbourg, France (pictured)

It is thought the men had been locked in the container for up to five days while it made its way through Belgium before being loaded on to the ferry.

All are said to be in good health, although some had not eaten for several days.

A spokesman for Stena Line said the men have been taken to a passenger lounge where they are being cared for.

The ship is due to dock is Rosslare around 3.30pm where it will be met by gardai and emergency services.

Gardai want to speak to the lorry driver and those found in the back of the truck about how they came to be on board, the Irish Mirror reports.

It comes after 39 Vietnamese citizens were found dead in the back of a refrigerated lorry in England on October 23. 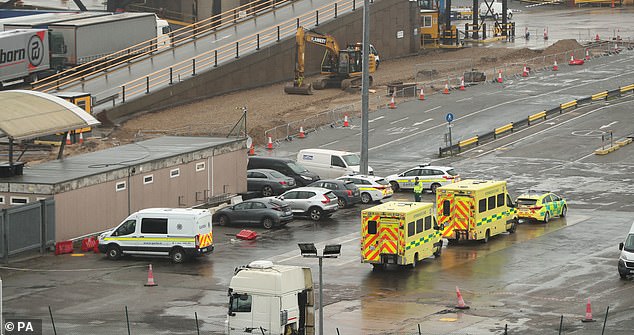 The men are thought to have been locked inside the container for up to five days while it made its way through Belgium before being loaded on to the ferry, which is due to arrive at Rosslare (pictured) around 3.30pm Thursday

The group of migrants included 31 men and eight women. Ten of them were teenagers and two were aged just 15.

It is thought they were shipped to the UK through Belgium, on a ship from the port of Zeebrugge to Purfleet, in Essex.

The driver of the lorry, Mo Robinson, 25, has appeared in court charged with 39 counts of manslaughter, conspiracy to traffic people, conspiracy to assist unlawful immigration and money laundering.

Extradition proceedings have started to bring another lorry driver, 22-year-old Eamonn Harrison, from Ireland to the UK.

Harrison, of Newry in Co Down, Northern Ireland, appeared at Dublin High Court last week charged with 39 counts of manslaughter, along with human trafficking and immigration offences, and was remanded in custody.

Detectives are also hunting Ronan Hughes, 40, and his brother Christopher, 34, who are said to have links with the road haulage and shipping industries, to hand themselves in.