Former homicide investigator Jeff Maher is an ideas man who loves nothing better than to share those ideas over a few reds and a plate of pasta.

On more than one occasion, I have been present at Maher’s Midday Meditations (once, while wildly flailing his arms to make a point, he managed to deposit the better part of a bottle of South Australian Shiraz on my lap). Jeff and his wife, Anthea, regularly dine with Anthea’s good friend, Tania, and her US artist husband, Mica Pillemer, discussing a range of worldly and domestic matters.

On this occasion, Mica, no doubt mellowed by Merlot, mentioned he was looking for an interesting subject to paint for the Archibald Prize. 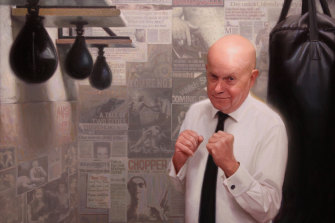 The portrait of John Silvester that should have walked away with the Archibald Prize. Credit:Mica Pillemer

Jeff responded: “I have an idea! John Silvester is your man. He has a head that looks like a bagful of spanners!” (I wasn’t there at the time, so this quote is approximate. He may have said a sackful of wrenches.)

Thus began a year-long journey culminating with this week’s announcement of the Archibald finalists. (The portrait didn’t make it, meaning the Archibald judges join those from the Walkleys and Quills who secretly conspire against me year on year.)

This is not a story (sadly) about me. It is about Mica because, frankly, his is much more interesting.

There is a little bit of the boxer in Mica. He moves his head from side to side while staring intensely at his subject, looking for a way through the mask we all wear.

He looks at light and shade and wants to know what makes his subject tick. He says he finds me interesting and intense. Paint fumes will do that.

While I sit there, I try to work out what makes him tick. He talks while he paints. It is a story that could make a movie.

His journey to Melbourne took three generations, a family that triumphed over crimes against humanity on three continents and sliding-door moments of unexpected romance stretched across the globe. 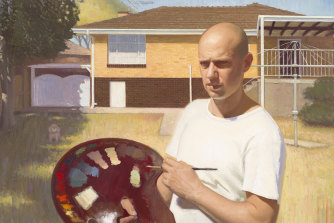 We begin in Lithuania in the 1940s. It is the darkest and deepest hole of the Holocaust. When Germany invades, there are 210,000 Jews living there. When they retreat three years later, there are 15,000. Mika’s grandmother, Edith, is 16 when she is imprisoned in a concentration camp. She eats only what she knows is safe and keeps well enough to work in factories and avoid the gas chambers.

One of her friends becomes a camp guard’s mistress. Mica says: “He told this girl, ‘I don’t want you to die and they are going to liquidate the camp. I want to get you out.'

“She said, ‘I’m not going without my friends’, and my grandmother was her best friend. If it wasn’t for her sticking her neck out for my grandmother, she wouldn’t have survived.”

The guard smuggles them out and hides them in a flat. They live on tiny portions of sugar and a few potatoes until liberated by the British.

Years earlier, a successful Berlin baker had seen the beginning of the Nazis' Final Solution.

He had two Catholics working for him as delivery men. “The SA Brownshirts killed one driver because he worked for a Jew. That was the sign to my great-grandfather that if they would kill someone for working for a Jew, they would eventually kill all the Jews.”

The family fled to Palestine. When Edith sailed into the same port, a young man was assigned to greet her, and so Sol Goodrich —- the Berlin baker's son — became Mica’s grandfather.

Meanwhile in Latvia, there is a family of eight sons and eight daughters. Well before the Nazis' reign of terror, anti-Jewish sentiments are growing and the eldest son escapes on a cargo ship to South Africa.

“He worked day and night and saved enough money to send for a brother and they worked until they had enough to get two more brothers [out], and then they got the four remaining ones,” Mica says.

They urge their sisters to join them but they are married and decide to stay. They are all killed in the Holocaust.

The man who jumped on the cargo ship died young and his son became a partner in a prestigious South African law firm. They are wealthy but the family that was oppressed in Europe sees the same racist overtones in apartheid.

The lawyer’s son — Mica's father, David — is an outspoken critic of a regime that doesn’t tolerate outspoken critics. “He couldn’t keep quiet, he marched and protested. The secret police parked outside the house and in the middle of the night, knocked on the door and told my grandfather his son was hanging around with the wrong people and something needed to be done or there would be trouble."

David was put on a plane to Israel. When David's father died, more than 200 people of colour came to pay their respects to a man who had secretly helped them for years. Mica says they told his widow “your husband paid for my kids to go to school" or "your husband helped set up our business".

In New York, Edith’s daughter, Arna, takes a year out to study at the Hebrew University of Jerusalem and answers an ad for shared accommodation. One of the renters is David Pillemer. 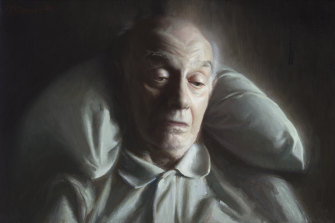 “He hated her at first,” says Mica. Eight months later, they were married.

The couple set up a law firm in California. They give their son, Mica, a career choice: be a lawyer or a scientist (a relative had won the Nobel Prize for chemistry, so it was a pretty high bar). The trouble is that from the age of 17, Mica knows he wants to be an artist.

He has to overcome more than his parents’ concerns, for in the beginning he isn’t very good.

He drops out of university and moves home. “I was getting pressure to drop all this art rubbish and become a lawyer.”

He sent a portfolio of work to Disney to join their animators' art school. “I thought I was a shoo-in but I was rejected with a note saying: ‘Learn how to draw first’.”

While at Disney, he picks up a pamphlet for an art school where the works look as if they are produced by historical masters. He eventually enrols for one class. Soon, he is doing 14 a week.

In New York, Melbourne lawyer Tania Mattei is a big cheese in the Big Apple's world of international takeovers. It is energy-sapping work, with all-night cramming considered part of the job. 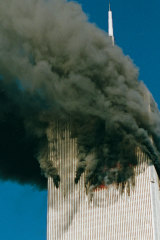 A photo taken after American Airlines Flight 11 hit the North Tower of the World Trade Centre, before the South Tower was hit on September 11, 2001.Credit:Tania Mattei

It is a Tuesday, about 8.45am, and she is running late for work when she hears a plane flying at an unusually low altitude. Moments later, an American Airlines Boeing 767 ploughs into the World Trade Centre. It is September 11, 2001.

She grabs her camera and is taking pictures when the second plane hits. She takes the lift to the foyer of her apartment building, where the doorman directs everyone to head away towards Brooklyn.

“As she was heading there, she thought this doesn’t feel right,” says Mica.

She turns around and heads back against the flow. She is near her apartment again when the first tower falls.

“She felt something was going to happen and started to run. She just heard this collective gasp from people behind her,” Mica says.

Mica is living in Los Angeles and after September 11 considers giving up his art dreams to enlist. Then his parents decide having a son who is struggling artist is not such a bad idea. He moves to New York and takes classes at the Art Students League. 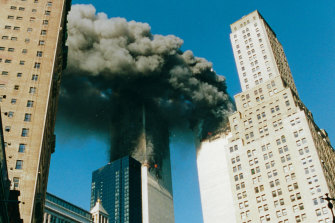 A shot taken by Tania Mattei as she left her apartment building on September 11, 2001.Credit:Tania Mattei

After September 11, Tania takes stock of her life: “It drove home to her that if there is anything you want do in life, seize it, because in a moment it can all be gone.”

Tania wanted to paint and enrolled at the Art Students League. “That’s where we met,” Mica says.

Soon, they are travelling to the great art cities of Europe. In Florence, she is delighted when a care package arrives from Australia. Her father has included DVDs of Melbourne's AFL games.

"She said, 'this is AFL, now sit down and I will teach you the rules'," Mica recalls. "She made me watch every single game and they always lost. At the end you could see she was just miserable. She couldn’t wait for the next game.”

Eventually, he understood and is now a rusted-on Demons supporter, believing AFL is the best sport in the world.

In 2015, they moved to Melbourne to raise their son, Gaius. Mica is now an enthusiastic Melburnian. He loves the little wave motorists give (or should) if you let them into traffic. Back in America, he forgets and starts waving at other drivers.

“That was a lapse in judgment. It could get you shot.”