Why did Justin Welby fail to alert police over paedophile at the cathedral? Archbishop of Canterbury must face disciplinary action over sexual abuse scandal, say lawyers

The Archbishop of Canterbury should face disciplinary action over his role in a sexual abuse scandal, lawyers have said.

Justin Welby failed to alert police when a priest was accused of sexually assaulting a worshipper – despite knowing that he was a convicted paedophile.

Canon John Roberts was later jailed for offences against three people, one of them the accuser who had gone to Mr Welby.

The Daily Mail can today reveal that Mr Welby, then dean of Liverpool, rejected the worshipper’s claims, and even banned him from the city’s cathedral for being ‘abusive and threatening’ in 2011.

He instead accepted Roberts’ denials and urged him to ‘avoid meeting people in homes alone’.

Roberts, 87, who had a 1989 conviction for indecent assault but was allowed to return to work, is serving a nine-year prison sentence. 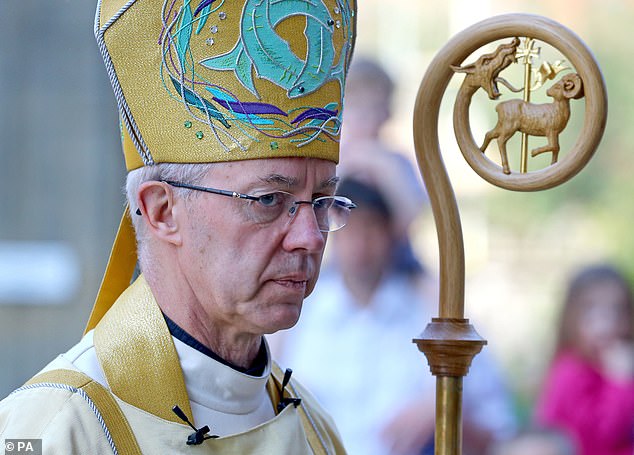 Archbishop of Canterbury Justin Welby should face disciplinary action over his role in a sexual abuse scandal, lawyers have said

Richard Scorer of Slater and Gordon, which represented one of the victims, called on the Church of England to take disciplinary action against the archbishop.

‘Justin Welby’s actions in this case were unacceptable and his concealment of these allegations in 2011 probably delayed further police action against Roberts by nearly a decade,’ he said.

‘The Liverpool diocese, in which Mr Welby had a senior role, knew about Roberts’ past and his conviction in 1989.

‘So this makes Mr Welby’s failure to act and his dismissal of the allegations at the time all the more shameful, and completely contrary to the Church of England’s public promises at that time.

‘If the Church is going to honour its promises then Welby should now face disciplinary action by the church for this.’

David Greenwood of Switalskis Solicitors, which advised another victim, called for an investigation. ‘Any right-thinking person would have taken advice and banned Roberts from any future work with the church,’ he said. ‘This was a seriously bad decision.’ 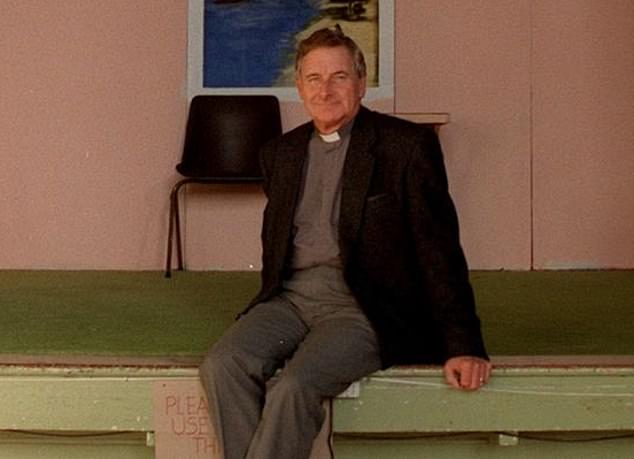 Canon John Roberts was later jailed for offences against three people, one of them the accuser who had gone to Mr Welby

Questioned in court at Roberts’ trial, Mr Welby insisted he had reported the initial allegation to the diocesan safeguarding adviser. But he admitted he had not recommended disciplinary action, saying his conclusion and that of colleagues was ‘it was just one person’s word against another’.

The archbishop has apologised publicly for the way the Church of England handled allegations of sexual abuse in the past.

He has also backed calls for the reporting of claims of sexual abuse of children and vulnerable adults to be mandatory.

Canon Roberts ministered from 1980 at St Peter’s Church in Woolton, where Paul McCartney and John Lennon first met. He was convicted of indecently assaulting a choirboy in 1989 and fined £500. 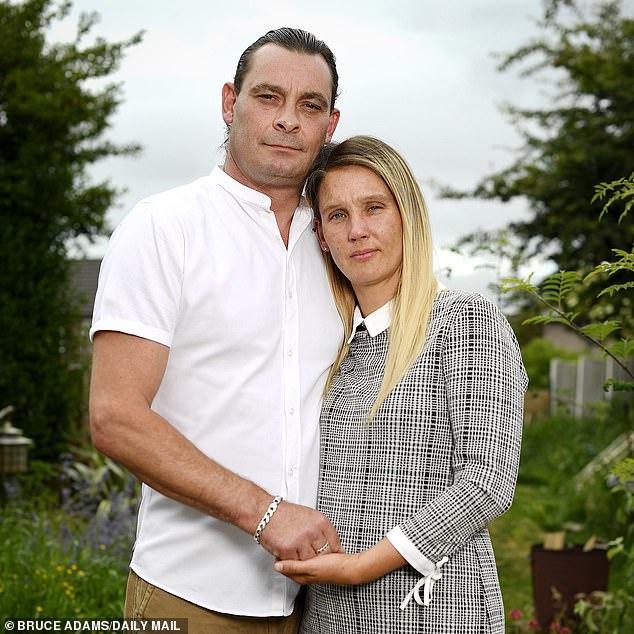 Craig Freedman (pictured with wife Jemma) was abused by John Roberts in the 1980s. After getting caught stealing collection money in church, he was ordered to do odd jobs at the vicarage but it quickly turned into sexual grooming backed by a steady stream of gifts

But he was reinstated within a fortnight, and later went on to do chaplaincy work at Liverpool Cathedral.

In 2011, a member of the congregation told Mr Welby that Roberts had groomed him and sexually assaulted him. But instead of informing his bishop or police, Mr Welby accepted the convicted paedophile’s denials.

At first he was ordered to do odd jobs at the vicarage but it quickly turned into sexual grooming backed by a steady stream of gifts. The priest took full advantage of the confused teenager, who had been adopted following a troubled upbringing.

Mr Freedman was traumatised by the worsening abuse and his behaviour became so disruptive he ended up in care. Matters came to a head when the canon exploited him at a youth club. 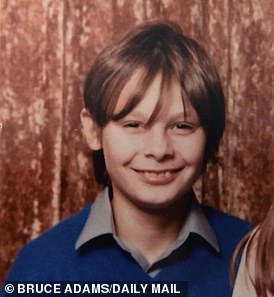 He was in such a state afterward that staff at his children’s home called police. In 1989, he testified against Roberts at Liverpool magistrates’ court and the cleric was convicted of indecent assault.

‘I spent four hours in the witness box. It was horrendous,’ said the former altar boy at St Peter’s Church in Woolton.

‘They told me he would never work again. That’s why I went to court, to stop it happening to others.’

Instead, Roberts was welcomed back after the shortest of suspensions.

By contrast, Mr Freedman, pictured left as a teenager, was left with only a bleak bedsit when he turned 18. He turned his life around after meeting wife Gemma and is now a Wirral-based security guard with two children.

After launching a bid for compensation from the Church of England, he was staggered to discover that Roberts had been promoted to become a canon at Liverpool Cathedral.

But the fact he went public in 2017 encouraged three other victims to contact police, leading to Roberts being jailed for nine years for nine sexual abuse offences.

Roberts retired two years later. The story took a twist in 2017 when the former choirboy Roberts had preyed on in the 1980s sued for compensation. It was only then that he discovered his abuser had continued his ministry.

Three men came forward with similar accounts. They included the cathedral-goer whose testimony was rejected by Mr Welby.

After the trial in which Mr Welby gave evidence for the prosecution, Roberts was found guilty of multiple counts of indecent and sexual assault. He was jailed for nine years.

Jurors were told the Church of England had closed ranks to protect Roberts, who was ‘encouraged’ to believe he would not be caught because of the failure to investigate allegations against him.

The Daily Mail has obtained a transcript of Mr Welby’s testimony detailing how he dismissed the accusation.

He admitted having been informed of Roberts’ background and history, which involved ‘sexual abuse of a minor’. After becoming dean, Mr Welby told Roberts ‘he needed to be especially careful because of his history’, he said.

In 2011, Mr Welby received a complaint about Roberts’ behaviour from a worshipper – referred to at the trial as Victim Z. But Mr Welby did not believe the claims and banned the accuser from the cathedral for threatening his PA.

He wrote to Roberts the same day telling him that ‘in the absence of any independent evidence’, he accepted the priest’s version of events. He asked him to ‘avoid meeting people in homes alone’, adding: ‘For obvious reasons, you are more vulnerable to unfounded accusations than others.’

The trial heard that later the same day Victim Z sent a sarcastic email to Roberts – copied to Mr Welby – to ‘congratulate’ him on his ‘successful meeting with your bosses at the cathedral’.

In it, he accused Roberts of making ‘sexual advances towards myself in my own home’ and predicted he would exploit ‘vulnerable young men’. Asked at the trial if he had believed Roberts’ account following Victim Z’s allegations, Mr Welby answered: ‘I suspect I did believe him.’

Roberts was convicted of eight indecent assaults plus one sexual assault.

A spokesman for Lambeth Palace said: ‘The archbishop has said publicly that had he known the full detail of Roberts’ 1989 conviction, he would have handled it differently. He has also said that he regrets the handling of the specific complaint while he was dean of Liverpool Cathedral.

‘The archbishop has apologised for his response.’

He added that Mr Welby had ‘fully co-operated’ with an internal church safeguarding investigation, which concluded no further action was required.

The Diocese of Liverpool said it recognised its ‘failings’ in the case. Sources insisted the 2011 allegations were not passed to police in line with the accuser’s wishes.