Zimbabwe’s armed forces were patrolling the ‘ghost city’ of Harare on Thursday as the country awaited results of a presidential election which has been marred by protests and bloodshed.

Police said the death toll had risen to six after people were shot dead during demonstrations against alleged electoral fraud on Wednesday, leading troops to clear the centre of the capital today.

President Emmerson Mnangagwa has declared victory in the disputed poll, the country’s first since the downfall of Robert Mugabe last year, and accused the opposition Movement for Democratic Change (MDC)  of inciting the unrest.

But his rival Nelson Chamisa also claimed he had won the election and said the result was being faked, saying police have raided opposition headquarters in the capital and seized computers, with the results set to be announced later this evening. 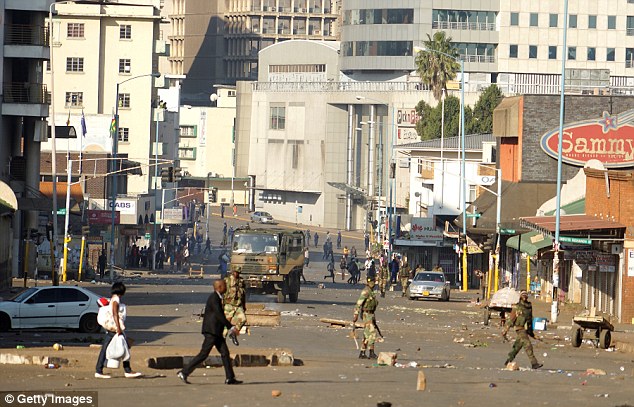 Police spokeswoman Charity Charamba told a press conference on Thursday that the toll had risen from three to six after further protesters succumbed to their injuries.

Mnangagwa said on Twitter that he wanted an independent investigation into the killings, and that he sought to settle differences ‘peacefully’. His party has said the opposition should ‘lose gracefully’.

Police claimed that around 4,000 opposition supporters were ‘besieging’ the city centre carrying iron bars and stones while the opposition said they were not responsible for the demonstrations.

The vote on Monday was meant to mark a new chapter after the end of the Mugabe era.

Mnangagwa had promised a free and fair vote after the military ushered him to power with a credible vote meant to end Zimbabwe’s international isolation and attract foreign investment to revive the shattered economy.

But anger flared on Wednesday over alleged vote-rigging, prompting troops to use live rounds on protesters. 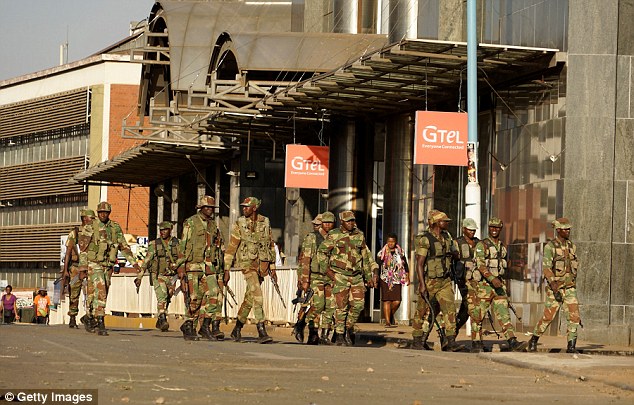 In a late-night press conference on Wednesday, Home Affairs Minister Obert Mpofu warned further protests would not be tolerated.

‘The opposition… are testing our resolve and I think they are making a big mistake,’ he said.

Chamisa ratcheted up pressure, saying he had won the presidential vote and that the result was being faked.

‘What they have been trying to do of late is to play around… that is rigging, that is manipulation, trying to bastardise the result, and that we will not allow,’ he told reporters.

In official results from the parliamentary election, also held on Monday, ZANU-PF won easily – suggesting Mnangagwa would be on course to retain the presidency.

Of 210 parliamentary seats, 207 have been counted with ZANU-PF winning 144 and the MDC Alliance just 61. 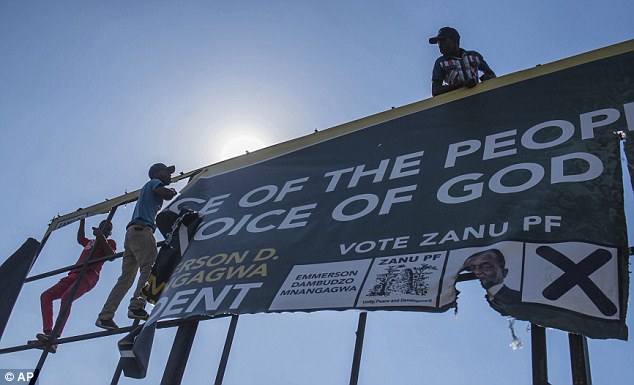 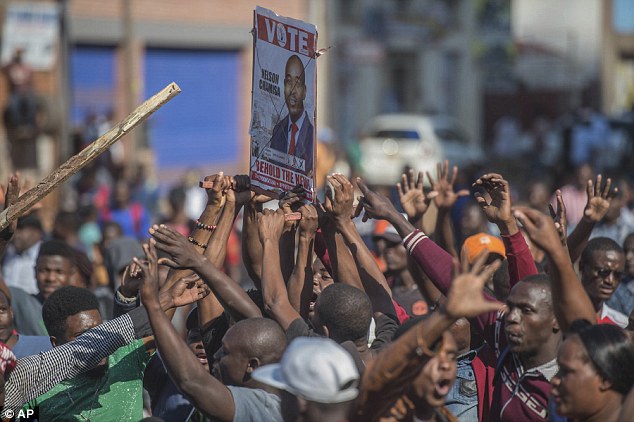 The MDC said the army had opened fire on Wednesday ‘for no apparent reason,’ killing unarmed civilians.

‘But I didn’t expect things to really change much with the elections. It was highly unlikely these guys would just give up power after eight months.’

Election observers from the Commonwealth issued a statement Thursday to ‘denounce the excessive use of force against unarmed civilians’ while former colonial power Britain appealed for Zimbabwe to remove the army from the streets.

Before the violence, European Union observers declared they found an ‘un-level playing field and lack of trust’ in the election process. Under Mugabe elections were often marred by fraud and deadly violence. Mugabe, 94, voted in Harare on Monday alongside his wife Grace after he stunned observers by calling for voters to reject ZANU-PF, his former party.

The campaign and polling day were lauded as relatively peaceful and open.

Mnangagwa was the clear election front-runner, benefitting from tacit military support and state resources. But Chamisa, a lawyer and pastor, sought to tap into the youth and urban vote.

Mnangagwa was allegedly involved in violence and intimidation during the 2008 elections when then opposition leader Morgan Tsvangirai pulled out of the run-off after attacks claimed the lives of at least 200 of his supporters.

If no presidential candidate wins at least 50 percent of the ballots cast in the first round, a run-off is scheduled for September 8.