Probably no country has paid as high a price as Australia did for the international inquiry into the origins of the COVID-19 pandemic. By becoming the first in the world publicly to call for an independent investigation, Australia made itself a target of the Chinese Communist Party.

We know the price we had to pay – punitive Chinese government sanctions on Australian trade worth over $20 billion a year.

But what have we gained? The first report by the scientific investigation was published last week, almost a full year since Foreign Affairs Minister Marise Payne went on TV to propose the probe.

You need to know that the investigation was put together by the World Health Organisation under terms negotiated with China’s government. There were 17 scientists from China and 17 from other nations, including Australia, Britain, Denmark, Germany, Japan, the Netherlands, Russia, Vietnam and US. 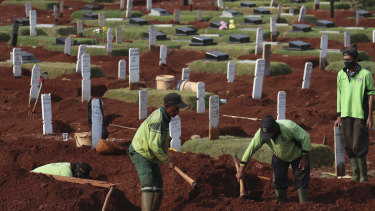 Indonesia buries its coronavirus dead. So far 2.865 million people have died from COVID-19Credit:AP

Unsatisfyingly, their joint report, snappily titled Global Study of Origins of SARS-CoV-2: China Part, does not reach any definitive conclusions. It does not identify Patient One. It does not specify the origin of the virus that has so far killed 2.865 million people and shattered economies and communities around the globe.

But neither does it rule out any of the main theories of its origin. The World Health Organisation’s director-general, Tedros Ghebreyesus, in releasing the report said: “Let me say clearly that as far as WHO is concerned all hypotheses remain on the table.”

And he confirmed statements from a number of the investigators that China’s authorities had refused to hand over all the information they requested: “To understand the earliest cases, scientists would benefit from full access to data including biological samples from at least September 2019. In my discussions with the team, they expressed the difficulties they encountered in accessing raw data. I expect future collaborative studies to include more timely and comprehensive data sharing.”

It left the US crying whitewash: “We’ve got real concerns about the methodology and the process that went into that report, including the fact that the government in Beijing apparently helped to write it,” said the US Secretary of State, Antony Blinken.

The Chinese lead, Tsinghua University’s Professor Liang Wannian, said that there had been “fierce disagreements” between the Chinese members and the rest of the group but insisted that full and free access had been provided to the investigation. Pressed specifically on Beijing’s refusal to hand over the raw data for the earliest test results on respiratory patients in Wuhan preceding the first known onset, he claimed that it was impractical to do so. 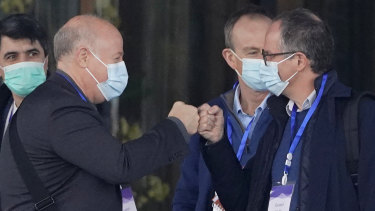 China’s party-owned media continued to push claims that the virus could have originated in the US military biowarfare labs at Fort Detrick. Members of the late US administration of Donald Trump continued to claim that the virus leaked from experiments gone wrong at the Chinese government’s high-security Wuhan Institute of Virology.

So does the report tell us anything at all? The first person to publish the genome of the virus, Professor Eddie Holmes of Sydney University, gave me his expert interpretation of the 120-page report and its 196 pages of annexures. It was naive to expect definitive answers from a three-week visit to China, he said, but the report does point the way ahead.

Holmes, who was not part of the WHO mission but is an eminent evolutionary virologist, said of the report: “The pathway forward appears to be twofold. First, try to find more cases of people who had respiratory diseases prior to the first case reported in December 2019, and are there samples available – people coming in for flu or pneumonia cases?

“That’s really important. It could be in Wuhan, in Hubei [province, of which Wuhan is the capital], or elsewhere in China.” This is exactly the sort of raw data the WHO team was denied.

“Second, the famous Wuhan market came back into focus, not as the place where it emerged, because that’s still not clear, but I think the report is saying – almost between the lines – that animal wildlife farming is most likely responsible.

“It strikes me the Chinese have pushed back quite firmly on this, which makes me think there’s something to it. It’s a big industry in China, which may be why they don’t like to discuss it. I’ve said what we need to do is ‘follow the animals’, and that could be to Wuhan, Hebei, elsewhere in China, or South East Asia. That is where something has happened, that’s the strongest suggestion.

“The most likely has always been, and still remains, an animal to human jump”, with bats the most likely point of origin but “probably through another animal”.

One theory that Professor Holmes had no hesitation in dismissing is the Beijing-sponsored claim that the pandemic emerged from America’s Fort Detrick: “That’s total nonsense.”

Another theory that Beijing keeps alive – and that the report also says is a possibility – is that the virus travelled to Wuhan on food packaging: “I don’t believe that either,” said Holmes, the NSW Scientist of the Year of 2020, based on his work on the virus that causes COVID-19. “That’s a way of trying to push it away from China, more political than scientific.“

And the US-led claim that the virus leaked from the Wuhan Institute of Virology? The report’s authors visited the labs and spoke to its staff, who reported that they’d suffered no early cases of COVID-19, and that they’d been doing no research work on any unreported viruses. “So if you say the virus came from a lab leak, you are effectively saying they’re lying,” Holmes observed.

The WHO’s Tedros Ghebreyesus seems to suspect as much: “Although the team has concluded that a laboratory leak is the least likely hypothesis, this requires further investigation, potentially with additional missions involving specialist experts, which I am ready to deploy.“

Beijing has yet to agree to any further investigations in China. Global health ministers meeting as the World Health Assembly next month will have to thrash out the options for any further inquiry. But Eddie Holmes observes that the whole subject “is politics, not science, and that’s sad”.

The history of breaking through Beijing’s health stonewalling is not promising. A celebrated virus hunter, the man who first identified Ebola, Peter Piot, last year related how he had tried to get China’s government to provide truthful data on its HIV-AIDS caseload when he was the head of the UNAids agency in 2002. “It’s the only time that my then boss, [UN secretary-general] Kofi Annan, called me on a Sunday afternoon,” Piot told The Financial Times. “He said, ’Peter, you’re a brave man, but nobody has ever won against the People’s Republic of China.” Piot gave up. If the world gives up investigating this great global tragedy, it will give up one of the best chances of preventing the next.