Washington: Bill Gates is planning to microchip the world through a COVID-19 vaccine. The 5G networks scattered around the world are causing people to catch coronavirus. COVID-19 was spread by Maine lobsters shipped to China.

The COVID-19 pandemic has given birth to some outrageous conspiracy theories packed with misinformation like the ones above, and new research from University of California Los Angeles sheds light on how these false narratives developed. 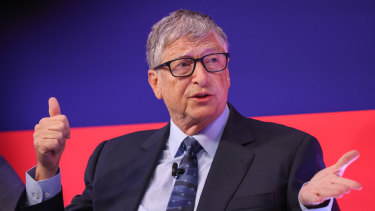 Bill Gates is at the centre of many conspiracy theories.Credit:Bloomberg

One of the researchers on the project was University of California, Berkeley professor Timothy Tangherlini, who teaches a class on the application of social network analysis methods to the study of Old Norse sagas.

“The narrative structures are of course the same — as humans growing up in cultural groups, we’ve become incredibly adept at telling stories that help explain how the world works, and why it looks the way it does,” Tangherlini said.

Turns out, the missing link between different modern conspiracy theories often lies in the one-and-only Bill Gates, billionaire philanthropist and founder of Microsoft.

Why Bill Gates is the ‘perfect villain’

“In a world in which nothing happens by chance, those with wealth are assumed to have the power to engage in and cover up malign activities. As a result, Bill Gates is an inevitable subject of conspiracy theories,” said Kathleen Hall Jamieson, director of Annenberg Public Policy Centre at the University of Pennsylvania. 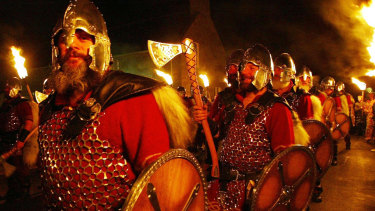 Old Norse sagas can tell us something important about how people cope with change. Credit:AP

In these conspiracy theories, Gates’ wealth coupled with his ties to Big Tech, his governmental contacts and his control of a major public health foundation give him the means to engage in and cover up untoward activities undetected, Jamieson pointed out.

“Gates in some ways acts as a ‘perfect villain’ in contemporary society, as he appears in so many different contexts — and could be cast as a villain in each of those contexts,” Tangherlini said.

How are Gates conspiracies similar to witchcraft theories?

“There are many parallels between COVID conspiracies around Bill Gates and theories about witches in the past. Both emerge in contexts of uncertainty as people confront inexplicable misfortune. Both attribute that misfortune to powerful, malicious figures who work through invisible means. Both demonise those powerful figures, which entails making them morally heinous (e.g., child kidnapping or cannibalism), making them existentially threatening, and enhancing perceptions of their power and influence,” said Manvir Singh, research fellow at the Institute for Advanced Study in Toulouse, France.

An analysis by The Guardian based on Tangherlini’s work revealed how the conspiracies swirling around Bill Gates show many parallels with theories developed about witches centuries ago.

For example, similar to how people used to believe witches would misuse items like brooms to fly and wands to cast spells, some modern Americans think Gates uses vaccines to implant microchips and activates the chips with 5G.

Like witches partnered with Satan, Gates has dark allies in the form of Dr Anthony Fauci, chief medical advisor to President Joe Biden, and the Chinese government, according to conspiracy theorists’ inaccurate posts on Reddit and 4chan.

Jamieson also found in her research the lie that Fauci was on the board of directors of Microsoft, making Gates his boss, spreading a false narrative that Gates’ goal is to obliterate America, similar to how witches were seen as a threat to Christianity.

Another false theory around Gates is that the pandemic was his plan to depopulate the world and that vaccinations are a way to sterilise the population, a radical leap from Gates’ efforts to raise awareness about overpopulation and climate change.

Similarly, people in the 19th century believed that witches would use potions and spells to cause miscarriages, The Guardian reported.

These parallels pointed out by Tangherlini demonstrate how studies of historical folklore tie to modern disinformation campaigns. The strategies humans use to cope with threats and uncertainty are similar across history, Tangherlini pointed out.

“Not only does this witchcraft belief map fairly well onto, say, something like the QAnon conspiracy theory world, but it also includes negotiations of strategies to deal with these threats that spill over into real-world action,” Tangherlini said.

What can be done to fight disinformation?

Gates announced in a call with reporters in June 2020 that he was adding another $US1.6 billion in funding for immunisation in lower-income countries, but the rampant conspiracy theories came up as a major topic of conversation. Many conspiracy theorists have claimed that Gates’ donations to public health efforts in developing countries are secretly mind-control efforts as if he were a witch casting spells on innocent Americans.

“I’ve never been involved any sort of microchip-type thing,” Gates said. “It’s almost hard to deny this stuff because it’s so stupid or strange.”

When asked for comment, the Bill and Melinda Gates Foundation encouraged people to look at the information that it has published on its site to better understand how and why they are funding public health initiatives.

“The best way we can combat misinformation is to spread the facts,” the foundation said.

According to Singh, social psychological research demonstrates that people attribute misfortune to other people more when they distrust those individuals, they feel persecuted or anxious, they confront misfortune that is hard to explain and when that misfortune is especially impactful.

“On the basis of that research, then, fighting misinformation would entail creating more trust, reducing feelings of persecution or anxiety, minimizing the impact of misfortune, and providing more plausible explanations of it,” Singh says.