Woman, 64, who became ‘very unwell’ with salmonella after eating five bags of pork scratchings launches legal action against Mr Porky products to see if it triggered her heart failure

A woman who became ‘very unwell’ with salmonella after eating five bags of pork scratchings has launched legal action to see if the illness triggered her subsequent heart failure.

Mr Porky products, made by Tayto Group at a factory in Lancashire, were recalled in September when 179 people were reported to have suffered diarrhoea, vomiting and fever following consumption.

A number were also reported to have been hospitalised, including Susan Williamson, 64, from Blackhall Colliery, County Durham.

She became ill with salmonella infantis, underwent a number of follow-up tests and was later diagnosed with heart failure.

Mrs Williamson has now instructed public health experts at Irwin Mitchell to investigate how she became unwell and whether her heart failure is linked to her salmonella illness.

‘The last few months have been an absolute nightmare and it doesn’t seem to be coming to an end anytime soon,’ she said.

‘When I fell ill after eating the pork scratchings, I thought it might make me a bit sick and off colour for a few days.

‘ Never did I ever imagine that it would lead to salmonella and I would still be suffering more than two months on. I’m still very unwell now and have been told I’ll need medical care for a long time. It’s been such a traumatic time for me and my family.’ 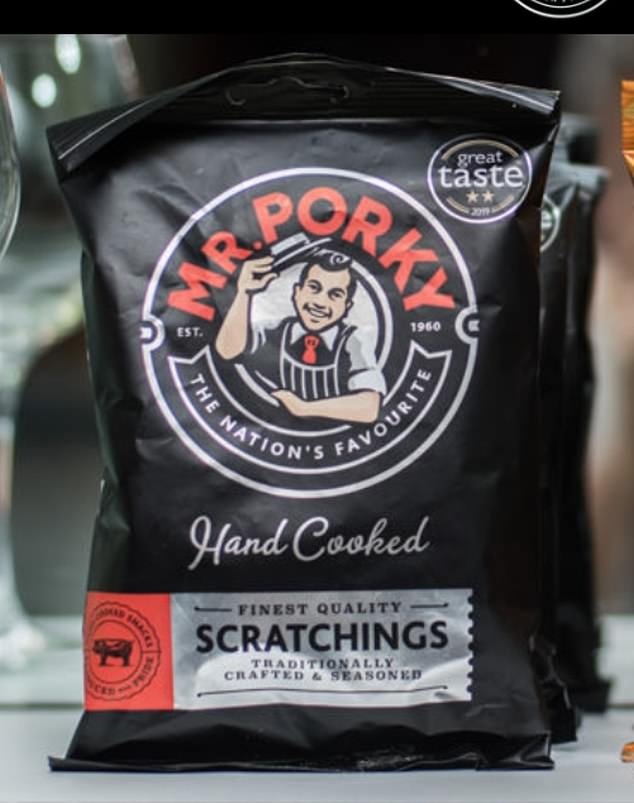 Mr Porky products, made by Tayto Group at a factory in Lancashire, were recalled in September after 179 people were reported to have suffered diarrhoea, vomiting and fever following consumption (stock image) 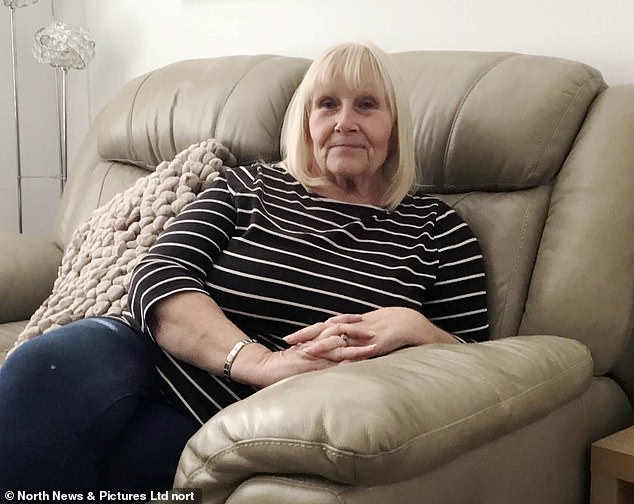 Susan Williamson, who became ‘very unwell’ with salmonella after eating five bags of pork scratchings, has launched legal action to see if the illness triggered her subsequent heart failure

Food contaminated with salmonella bacteria does not usually look, smell, or taste spoiled.

However, anyone can become sick with a salmonella infection – and children, seniors and people with underlying health conditions are at higher risk of serious illness.

Anyone who has eaten any recalled products and developed symptoms of salmonella food poisoning should seek medical attention.

Symptoms include diarrhoea, abdominal cramps, and fever within 12 to 72 hours after eating contaminated food. Otherwise, healthy adults are usually sick for four to seven days.

Head of the Gastrointestinal Pathogens Unit of PHE’s National Infection Service, Saheer Gharbia, said: ‘Salmonella generally causes a mild illness, although vulnerable groups like children under five years, the elderly, and those with weakened immune systems may experience more severe illness and may require hospitalisation.

‘Symptoms of a Salmonella infection include diarrhoea, stomach cramps and sometimes vomiting and fever.

‘Anyone who is concerned about symptoms should contact their GP or out of hours service in the first instance.’

Mrs Williamson bought a multipack of five bags of pork scratchings on August 3 and ate them over a few days.

She fell ill on August 8 and began to suffer with sickness and diarrhoea, as well as hallucinations.

Mrs Williamson contacted her GP and the NHS 111 service as her condition deteriorated over the following days. On August 12, she was taken to hospital by ambulance and was admitted.

She was put on a drip overnight and discharged the next morning, Two days later, she was readmitted to hospital, diagnosed with salmonella infantis on August 17 and discharged on August 23.

On September 17, she attended hospital where she was given a chest X-ray. An ECG was performed and she was found to have suffered heart failure and was readmitted to hospital.

Doctors have told Mrs Williamson she will need ongoing care and a procedure on her heart.

She and her husband, Paul, had been due to go on a couple of holidays in their motor home but these were cancelled because of her illness.

Life has still not gone back to normal for Mrs Williamson as she is still suffering tiredness and the complications arising from the salmonella.

‘It’s also very worrying to think that there could be more people out there suffering like I am, and we deserve to have some answers as to how this happened,’ she added.

‘I know an investigation can’t change what I’m going through, but at the very least it can hopefully help prevent it happening to others in the future.’

Irwin Mitchell is now instructed by eight people who say they have fallen ill after eating Mr Porky products.

Sebastian Thornton, 37, from Malton in North Yorkshire, said he ate Mr Porky products as part of a Thai dish and shortly afterwards he fell ill on July 1 with fever, diarrhoea, sweats, and lethargy.

He also experienced shakes and was passing blood. The self-employed professional joiner was hospitalised on July 4 as a result of his illness. He was discharged two days later with antibiotics.

‘By the time I heard about the recall, I had already eaten the pork scratchings. Within a few days, I felt awful,’ he said.

‘I ended up having to go into hospital and after I was discharged I was told I had salmonella infantis. It was a huge shock. The impact of my illness lasted for around six weeks, so I wasn’t able to work during that time. 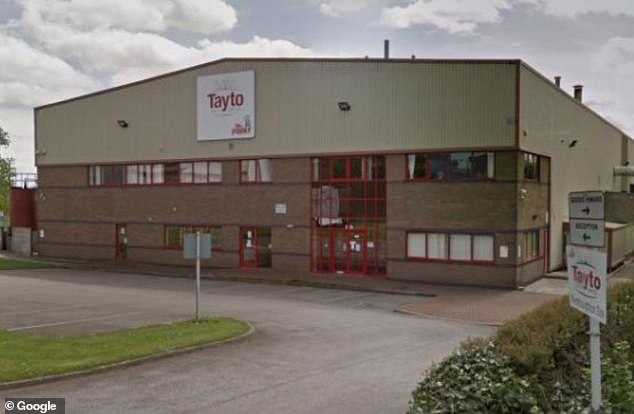 Mr Porky products are made by Tayto Group (stock image)

‘It’s really worrying to think that so many other people have also been struck down with symptoms of salmonella. I feel it’s important that an investigation takes place to try and prevent this from happening to others in the future.’

The legal firm supports people affected by illness outbreaks such as the well-known outbreaks of salmonella at the Real China restaurant and the Newcastle Spice Festival, as well as the Chapman and Sons butchers’ salmonella outbreak in Blackhall Colliery in 2018. 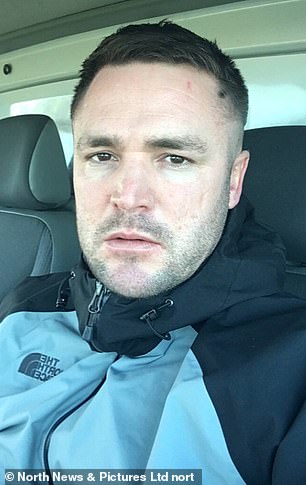 Sebastian Thornton said he ate Mr Porky products as part of a Thai dish and shortly afterwards he fell ill on July 1 with fever, diarrhoea, sweats, and lethargy

Clare Pearson, the specialist public health lawyer at Irwin Mitchell representing Susan, said: ‘Susan is among a number of people who have been diagnosed with Salmonella Infantis and other illnesses after consuming pork scratchings.

‘Not only is salmonella a serious bacterial infection, it can often lead to ongoing and long-lasting health problems, and even death.

‘In some cases, salmonella has been known to have the ability to lead to cardiovascular complications. We’re now investigating how our clients fell ill and also whether Susan’s heart failure is linked to her salmonella infection.

‘While we can’t change what Susan and the other people we represent are going through, we’re determined to get them the answers they deserve as to how this happened and will support them throughout the process.

‘If any others have also fallen unwell like Susan after eating pork scratchings we would like to hear from them as this will assist us with our investigations.

‘It’s also important that if during the course of our investigations any issues are identified, necessary lessons are learned to ensure food hygiene standards are met in the future.’

At the time of the reports, Public Health England and the Food Standards Agency urged people not to eat packets with a best-before date up to February 2022.

A spokesperson for Tayto Group said: ‘At Tayto Group, we take the safety of our products very seriously which is why we swiftly halted production and issued a product recall.

‘Since then, in conjunction with the relevant agencies, we have conducted a detailed investigation and implemented changes before restarting production.

‘We have been in touch with a number of consumers directly and are working closely with them to resolve their concerns.

‘We are very sorry to hear that a number of people are still feeling unwell and we wish them a speedy recovery.’