‘Did you put your finger in an electric socket?’: Black shop worker, 26, shares racist abuse from Currys PC World colleagues who called him ‘Afroman’

A black shop worker has alleged his colleagues racially abused him and called him ‘Afroman’, saying his hair looked like he had put his ‘finger in an electric socket’.

Terrelle Graham, 26, from Bradley Stoke, south Gloucestershire, claimed he was subject to racist abuse from his colleagues while he was working at Currys PC World in Bristol.

Shocking video footage captured the moment that the former Sony contractor was told that his hair looked like he had put his finger in an ‘electrical socket’.

Dixons Carphone, which owns Currys PC World, said an investigation had been carried out and action was taken in line with company policy.

In the clip, his colleague asks whether Mr Graham plans to get his hair ‘combed’ or if he is ‘going for the Afro look on purpose’. 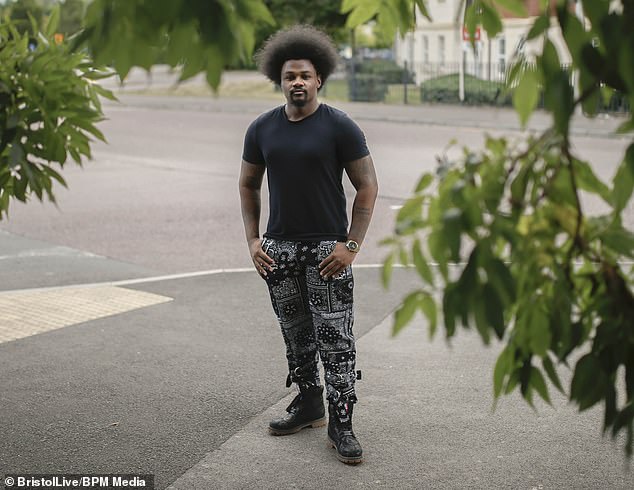 Terrelle Graham (pictured), 26, from Bradley Stoke, south Gloucestershire, claimed he was subject to racist abuse from his colleagues while he was working at Currys PC World in Bristol

To which Mr Graham asks: ‘I need to get my hair combed?’

And his colleague says: ‘Well, I mean, at least straightened. It looks like you basically put your finger in an electrical socket and not left.’

His colleague then calls Mr Graham’s hair frizzy, saying it is the ‘nicest way’ he can describe it, before adding: ‘You planning to leave it like that or are you going to the hairdressers at some point?’

When Mr Graham says that it is his natural hair, his colleague simply replies: ‘Oh fair enough.’

In a follow-up video where another man allegedly racially abuses him, Mr Graham wrote a caption claiming he had been subject to racist abuse three times after being at work for just two hours.

He added: ‘I shouldn’t need to explain what’s wrong with what was said and asked of me here.’

In the clip, his colleague is heard asking if Mr Graham has heard of the song Because I Got High by Afroman, before telling him to sing it. 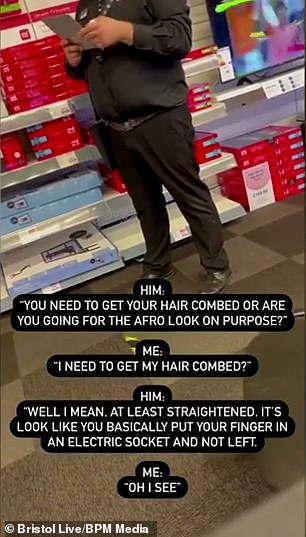 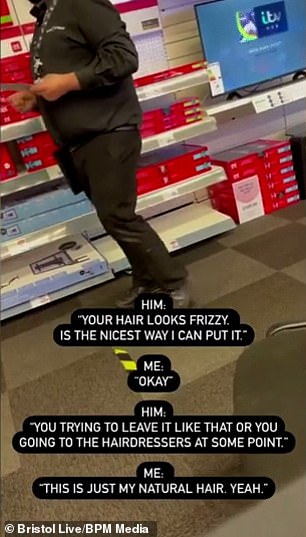 When Mr Graham refuses to sing the song, the man laughs and asks: ‘So how come you got the Afro today?’

To which Mr Graham says: ‘It’s my hair, I wanted it out.’

Mr Graham claimed the two incidents shown in the video, which he recorded after becoming fed up with the racist abuse he allegedly received from colleagues, both took place on June 22 this year at Currys PC World in Cribbs Causeway.

Mr Graham said he worked for Sony between October 2019 and September 2021 at Currys PC World and John Lewis, having been moved from the electronics store after raising concerns of racism.

He claimed he has been let go from his assignment by Sony after being told they could not find a store for him to work at, while the employees involved remain at Currys PC World.

Dixons Carphone insisted that the language experienced by Mr Graham was in no way representative of their organisation’s values, while Sony said it was aware of the issues raised.

Sony claimed a full review was being conducted, insisting it takes any allegation of discrimination extremely seriously.

Mr Graham alleged that the racist abuse involved a number of different people and continued off camera throughout the entire two years he worked at the store for Sony.

He claimed he raised concerns about racist abuse from his colleagues at Currys PC World last June, but alleged that ‘nothing substantial was done’ apart from moving him to John Lewis.

He said the racial abuse had a massive impact on him and he became too mentally exhausted to be around people, ending up becoming more isolated.

Mr Graham said: ‘It caused such a mental strain on me.

‘I would finish work mentally exhausted from having to put up with it.’ 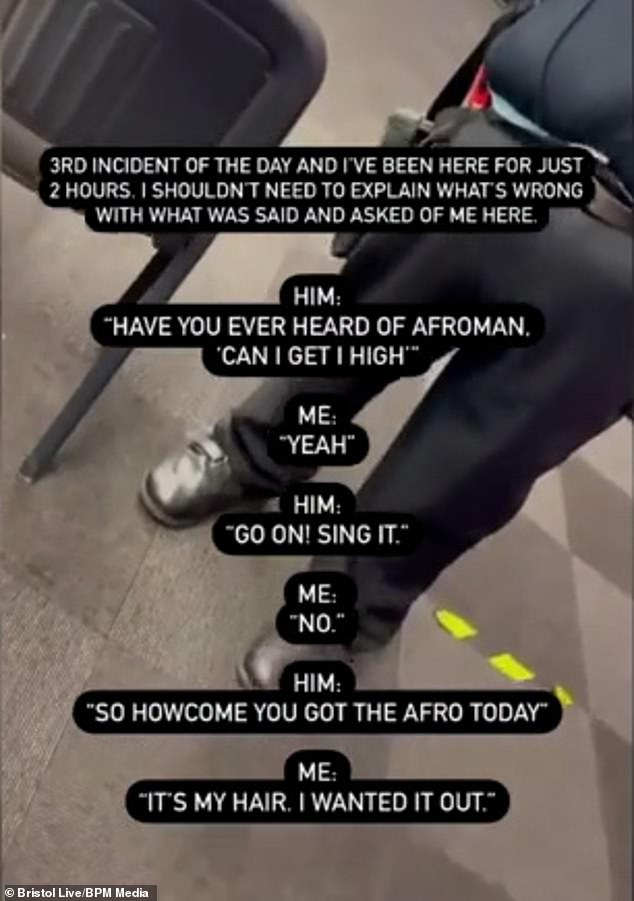 In a follow-up video where another man allegedly racially abuses him (above), Mr Graham claimed he had been subject to racist abuse three times after being at work for just two hours

He claimed he has experienced similar abuse in previous jobs and described it as a ‘constant cycle’ due to systemic racism in companies.

Mr Graham claimed Sony reassured him and promised him mental health support two weeks ago, but he claimed this has never happened.

He alleged he was let go last week when recruitment company Hays terminated his assignment on behalf of Sony after being told they could not find a store for him to work at.

Alleging that if he had remained ‘silent’ he would still have a job, he claimed: ‘It [the alleged racism] started within the first few months of being there and it became more frequent.

‘It ended up being something that would happen multiple times a week.

‘I thought, without evidence, they are not going to care and even with the evidence they do not care.

‘I was trying to get some clear evidence to say ‘this is what is going on in your stores’. ‘If I continued to endure the abuse in silence, I’d still have a job.’

Mr Graham said he feels his concerns were not taken seriously enough, saying there have been no significant consequences for the employees involved.

He continued: ‘I should have never been removed from the store – it should’ve been the employees who were sacked and then removed, to improve that work environment so that I’d feel more comfortable working in there.’

After he was moved to John Lewis, he claimed someone tried to get him removed by saying he was ‘angry’ and ‘confrontational’, with Mr Graham saying these are typical descriptions given to black men when they defend themselves.

A Dixons Carphone spokesperson said: ‘We do not condone or accept discriminatory behaviour of any kind, and we take our responsibilities as a diverse and inclusive employer extremely seriously. 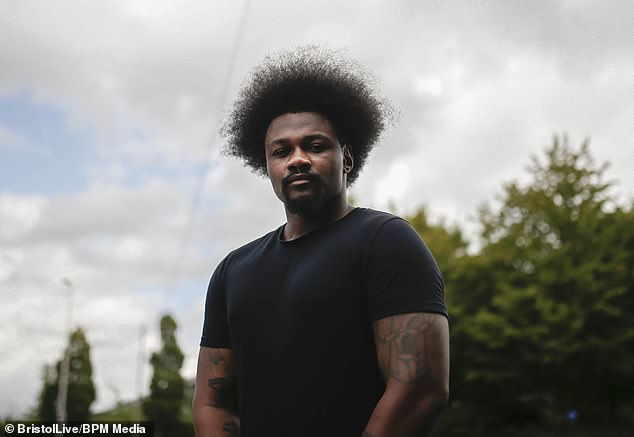 Mr Graham (pictured) claimed he has been let go from his assignment by Sony after being told they could not find a shop for him to work at, while the employees involved remain at the store

‘The language and behaviour experienced by Mr Graham are in no way representative of our values as an organisation.

‘When he shared his experiences with us, we undertook an investigation with those concerned, and action was taken in line with our company policies with the colleagues involved.

‘We’ll continue to work with our colleagues, customers, partners and shareholders to ensure everyone feels included, can be themselves, and be at their best.’

In a statement, Sony UK and Ireland said: ‘We take any claim of discrimination extremely seriously.

‘We embrace diversity and firmly believe in equality for everyone, regardless of race, gender, age, ethnicity, religion or sexual orientation.

‘We have been made aware of the issues raised by a contractor employed as a store promoter at a retailer site and are conducting a full review.’

‘We fully support equity, diversity and inclusion and treat allegations of racism with the utmost seriousness.

‘At the time of the allegations, we followed the correct processes to protect the candidate’s welfare and worked with the other associated parties to ensure the matter was investigated.’

John Lewis said in a statement: ‘John Lewis has a zero tolerance approach to racism and we’re really sorry to hear about Terrelle Graham’s experiences.

‘We have started an immediate investigation.’