Boy, 16, pulled out of the sea in Wales dies as friends pay tribute to ‘beautiful, brave, kind hearted, clever’ teen

A 16-year-old boy who was rescued at sea in Wales has died after having his life support machine turned off.

Blake Ward got into difficulty while swimming at sea off Tywyn North beach in Gwynedd on Tuesday before being airlifted to hospital.

But the youngster, from Dudley in Birmingham, didn’t pull through and a decision was made to turn off his life support. 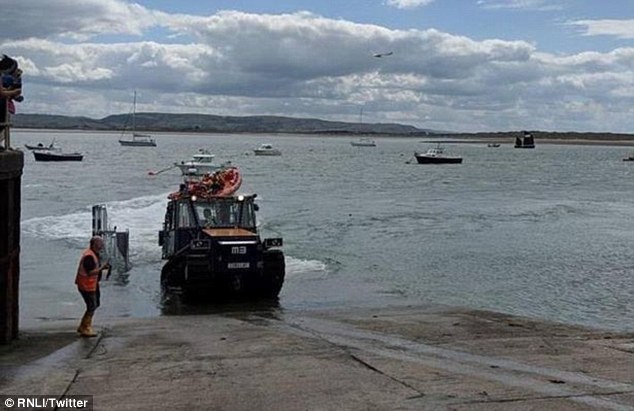 RNLI helped rescue a boy on Tuesday after getting into difficulty at sea off Tywyn North beach in Wales. He later died at hospital

Becky Ray, the mother of the victim’s girlfriend, paid tribute after the tragic accident:

‘Even though he hadn’t been part of our family for long his loss has left us beyond devastated and heartbroken.’

RNLI volunteers and members of the public helped pull three teenagers from the water earlier this week, including another 16 and 17-year-old.

Ward was taken to Alder Hey Hospital in Liverpool and the other two taken to Ysbyty Gwynedd.

A maritime serviceman was on duty at the time and called emergency services after noticing the three were in trouble.