Don’t stop play now! Moment Brian May lands helicopter in middle of cricket pitch forcing match to be DELAYED – as he drops in for wedding in area

Brian May halted a cricket match after landing in a helicopter next to the pitch.

The Queen guitarist, 74, left cricketers and spectators stumped when the private chopper dropped in.

He was attending band member Roger Taylor’s daughter’s wedding in the village of Mawnan Smith, near Falmouth, Cornwall.

Queen guitarist Brian May delayed a local cricket game after landing a helicopter on the ground. He and his wife Anita Dobson were in the area for Queen drummer Roger Taylor’s daughter Rory’s wedding

The match between Falmouth 2nd XI and Helston 2nd XI at the Hine Downing Oval was delayed for seven minutes as the rocker disembarked with his wife Anita Dobson, 72.

Taylor – who played drums for Queen whose hits included We Will Rock You – has a house in the nearby village of Helford.

‘The club knew it was coming, we do get one or two helicopters who land on the outfield from time to time.

‘Everyone just stopped to watch this monster land in the middle of the game.

‘It dropped him off then went off to refuel then came back again.

‘It’s something you don’t see every day.

‘They went to the wedding then came back and flew off at about 10.15pm.

‘It was quite a good game but we lost. Being the second team, there wasn’t a big crowd.’ 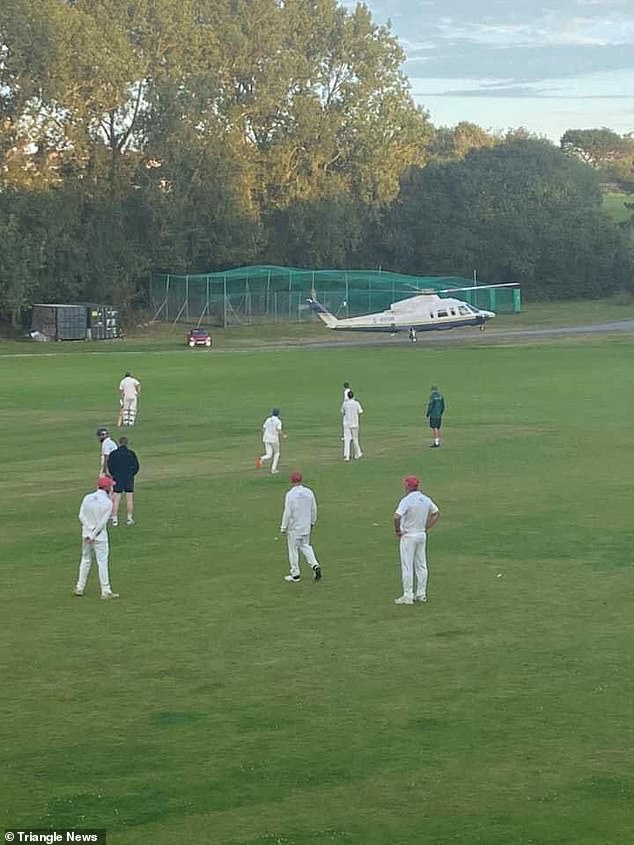 Falmouth Cricket Club, whose 2nd team were playing at the time, said one or two helicopters land on the ground from time to time, but added: ‘it’s something you don’t see every day’

Onlooker Mick Davidson said he was sat in his car watching his youngest son playing for Falmouth when the helicopter descended and parked 20 feet away from him.

‘Falmouth 2nds match v Helston interrupted this afternoon by a helicopter bringing, so I’m told, Brian May and his wife to Roger Taylor’s daughter’s wedding.’