A startup that makes cultured mozzarella and ricotta cheeses without cows has just got record funding from investors looking to tap the growing market for environmentally friendly dairy alternatives.

Berlin-based Formo will use the $US50 million ($68 million) – a record for a European foodtech – to expand its product range into mature and ripened cheeses like cheddar and gruyere. The company will also scale up its precision fermentation technology, it said on Monday. 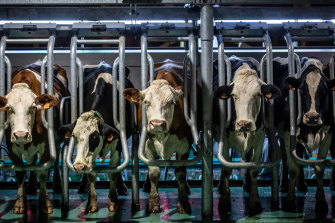 The company says it can make full dairy cheese in its labs without the need for cows. Credit:Bloomberg

“We’re talking about a product that needs to go mass market or needs to be produced in big volume so we’re now working on a scale up,” Raffael Wohlgensinger, co-founder and chief executive officer of Formo, said in an interview. “We want to open up the focus and really make sure we are able to cover pretty much any cheese type you can imagine.”

Investors are putting money into a new generation of startups that seek to replicate the pleasures of eating cheese, without the climate-warming impact of livestock farming. Companies including Miyoko’s Creamery in the US and Sweden’s Stockeld Dreamery have secured funding in recent weeks, while bigger companies including Oatly view it as a new frontier for product expansion.

Formo, formerly known as Legendairy Foods GmbH, wants to replicate the same taste and texture of real cheeses. Its precision fermentation technology relies on microbes to create proteins that form the basis of cheeses.

“What our products contain are the actual milk proteins, but we don’t get them from a cow,” said Britta Winterberg, Formo’s co-founder and chief scientific officer. “We get them from our micro-organisms.”

The company is targeting markets where it can get regulatory approvals first. They include Singapore, followed by Israel, the Middle East and eventually Europe. Because the products won’t contain lactose, they will be particularly appealing for the Asian market where intolerance is more common, Wohlgensinger said.