Britain is set to be hit by another deluge of rain today as the clean-up in the wake of the deadly Storm Callum continues.

Flood alerts have been issued across parts of the UK today with rain expected across the south and parts of central England and scattered showers in the far northwest.

This comes after a man was killed in a freak landslide as Storm Callum tore across Britain over the weekend, causing the worst floods in Wales in 30 years.

Corey Thomas Sharpling, 21, was swept to his death when heavy rain and hurricane-force winds sent tons of rock and soil hurtling into a line of queuing traffic.

Witnesses said he was hit after he stepped off a bus to watch workmen remove a fallen pine tree blocking the steep-sided valley road in Cwmduad, West Wales. 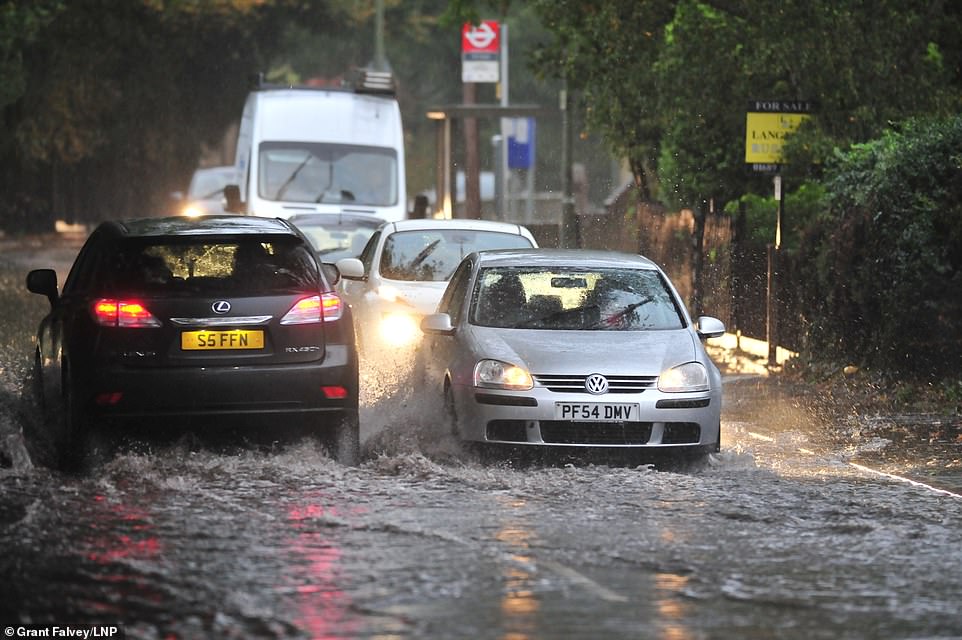 Cars drive through floodwater at St Mary Cray in Bromley, South East London, after heavy rain overnight and this morning 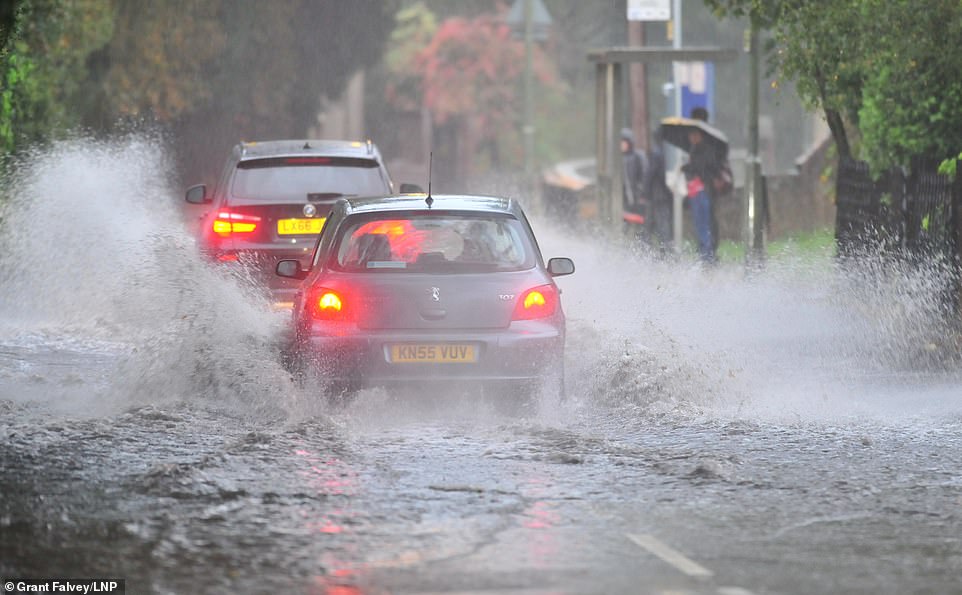 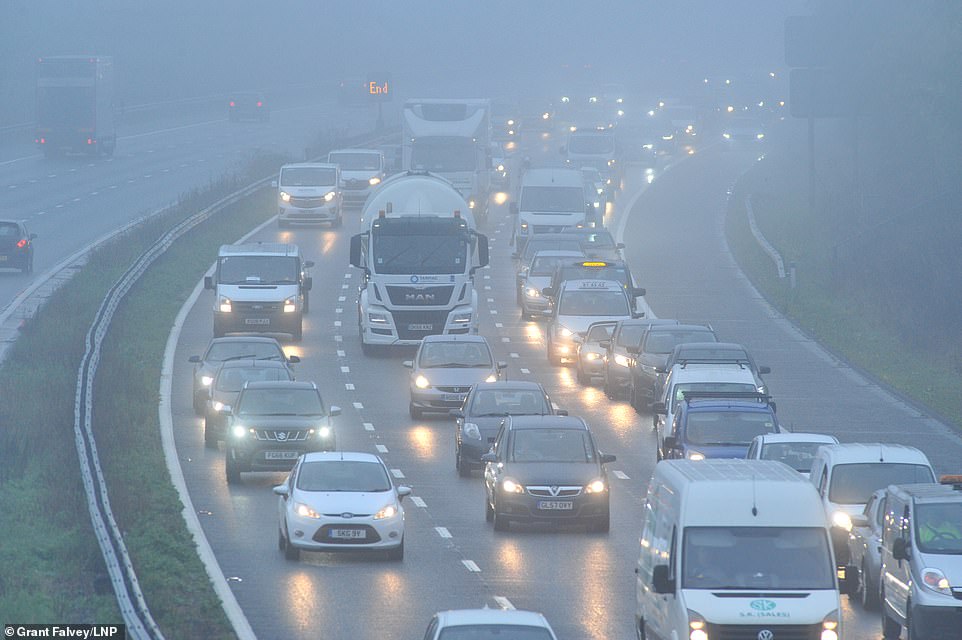 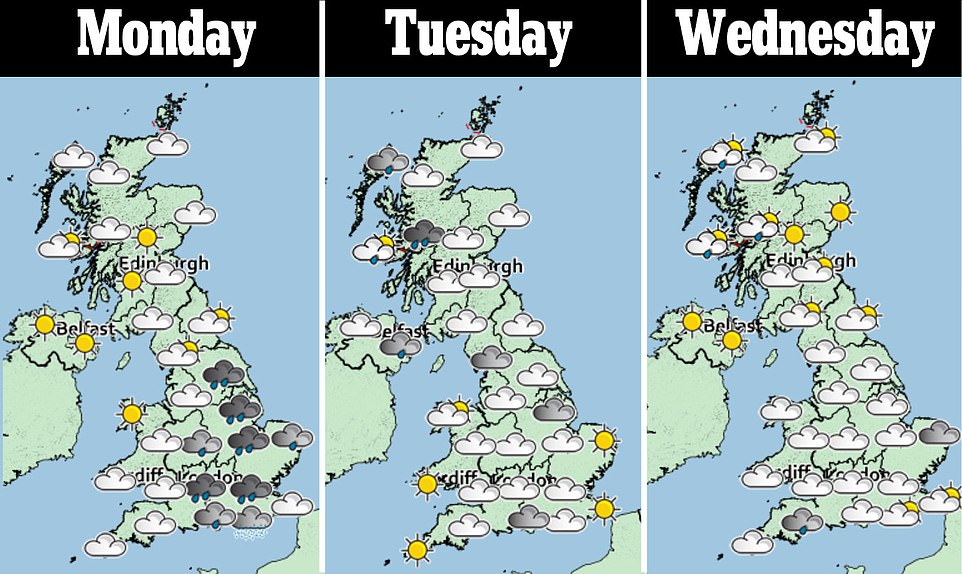 Mr Sharpling was on his way to work at McDonald’s in Carmarthen and was phoning his manager to say he would be late when the tragedy unfolded at 2pm on Saturday.

The sheer force of the landslide pushed an articulated lorry into the raging River Duad, which runs alongside the A484. Incredibly, the driver managed to escape unhurt.

Villager Huw Edwards, 60, told the Daily Mail: ‘It’s a miracle that the lorry driver got out of this alive.

‘Sadly the man who got off the bus was not so lucky. He took the full brunt of the landslide and he didn’t stand a chance. He was in the wrong place at the wrong time.’

A farmer’s wife who lives nearby added: ‘If he had stayed on the bus he would have been fine. But there was a long delay and he got off to see what was going on. All of a sudden there was a rumbling sound and he was hit by a landslide.’

In a tribute, Mr Sharpling’s family said: ‘We are heartbroken at the tragic loss of our beautiful son Corey. Many knew his wit, charm and sense of loyalty and we take those things with us in our hearts. We would like to thank the community for their support at this time.’

Ron Mounsey, the owner of the McDonald’s restaurant where Mr Sharpling worked, added: ‘The staff here are extremely subdued today. Corey had been with us since January and in that time he had become a very popular member of the team.’ 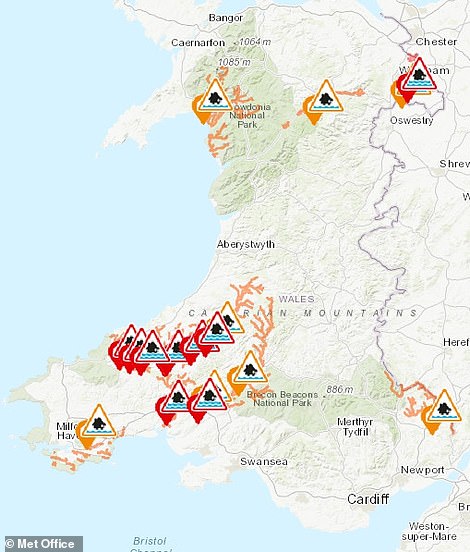 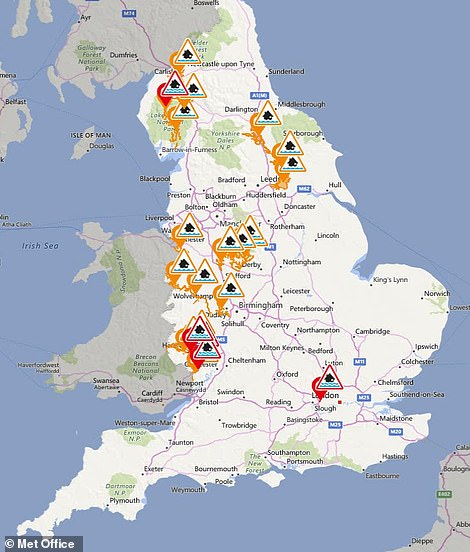 A map of Wales (pictured left) shows the high number of flood alerts in place for the country over the coming week. While more flash flooding is expected across parts of England too (map pictured right) 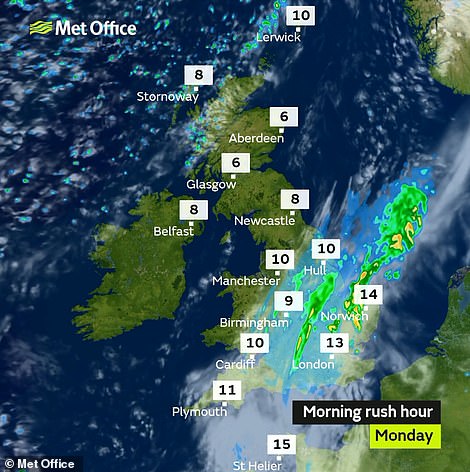 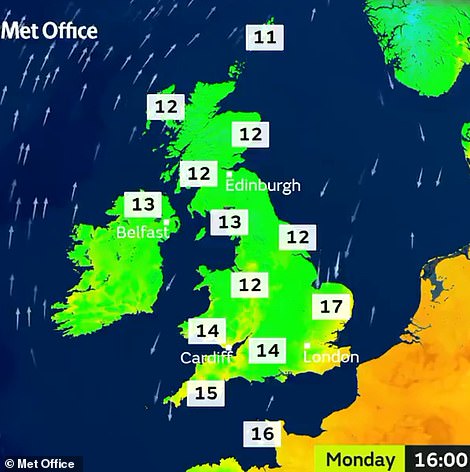 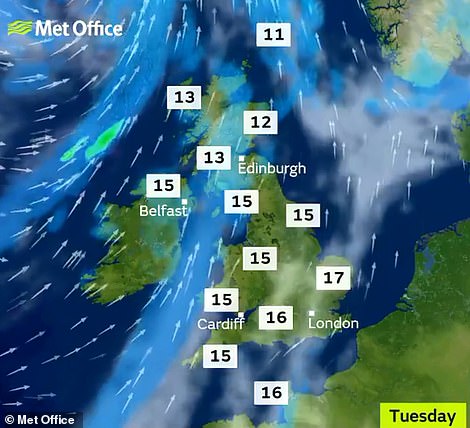 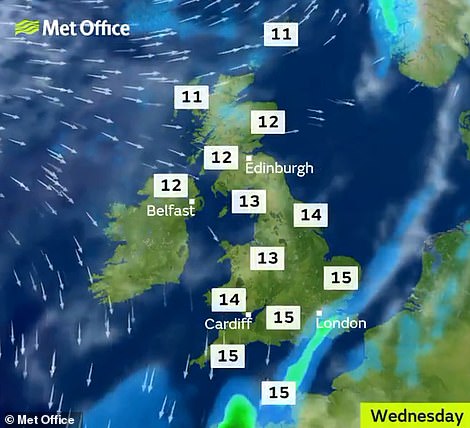 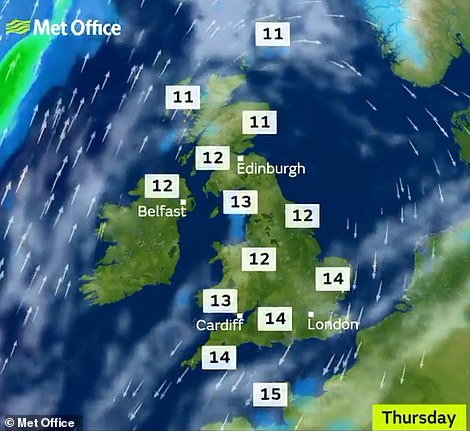 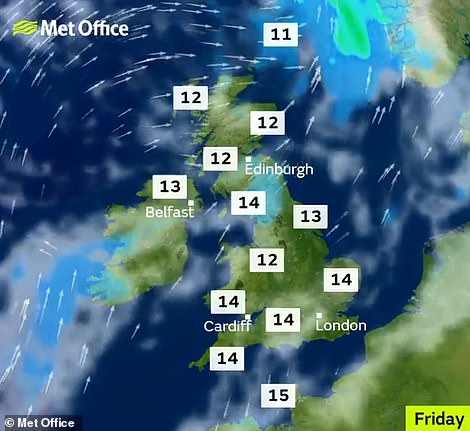 Thursday will still feel mild, but conditions will still be wet across large parts of the country and through to Friday

The tragedy followed the death of a 32-year-old man who drowned in the swollen Penarth marina, near Cardiff, at 10pm on Friday. His girlfriend, 35, was rescued alive after diving in to rescue him and is being treated in hospital.

Hours later, a man’s body was found in the sea near Brighton pier. He died after being swept away by rough seas in the East Sussex town at 1.30am on Saturday.

Another person was feared dead last night after witnesses saw someone being swept away in the heavily-swollen River Taff in Cardiff. A police helicopter search was launched by police near Blackweir Bridge at midday yesterday.

They were focusing their search on the same part of the river where a reckless kayaker was pictured taking on the raging waters earlier in the day.

Meanwhile, there was relief for families in Crickhowell as the flood waters which had surrounded their town dramatically receded yesterday morning.

The town, in Powys, mid-Wales, was turned into an island when a month’s worth of rain fell in 36 hours over the course of Friday and Saturday.

Cars were submerged and firemen had to pump water from a local pub as police warned people to stay away from the area for their own safety. National Resources Wales said Storm Callum caused the worst flooding in Wales in 30 years. 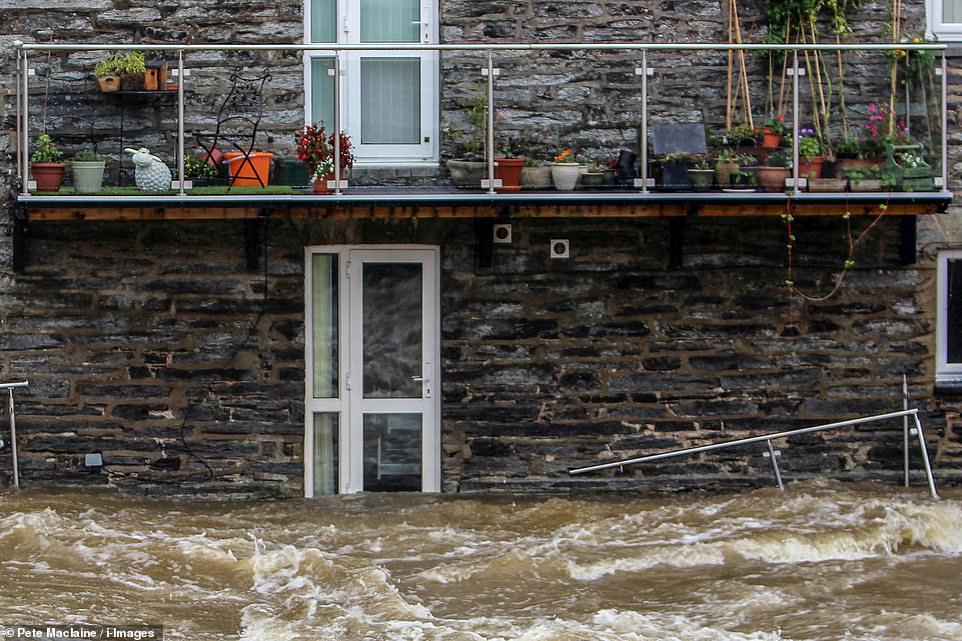 There are floods and road closures along the river Teifi in Ceredigion, West Wales following torrential rain fall in the region 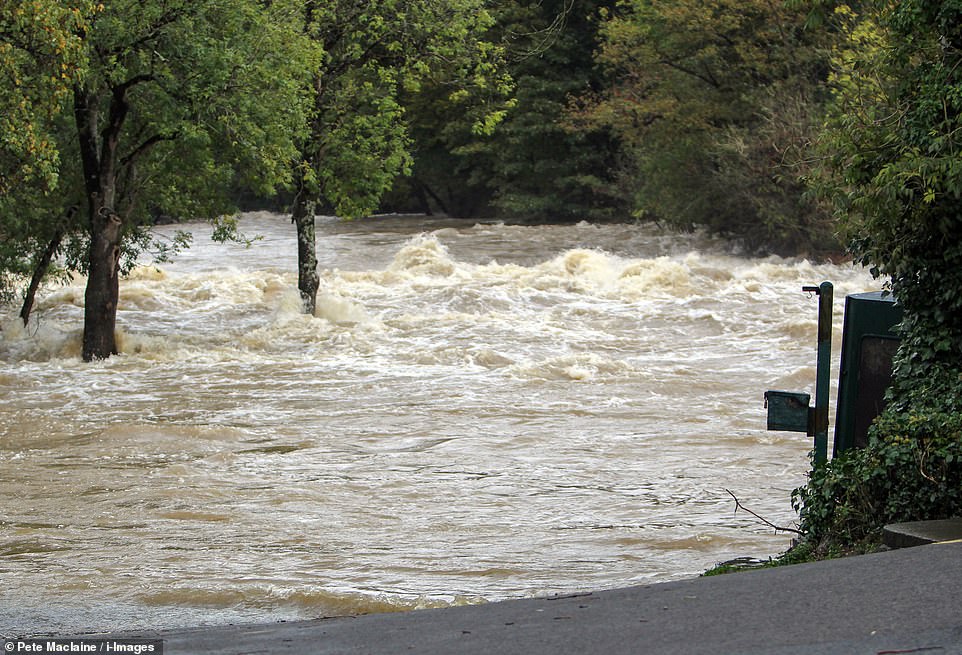 Parks are covered in a thick layer of brown flood water after torrential downpours in West Wales. Pictured: Teifi, Ceredigion 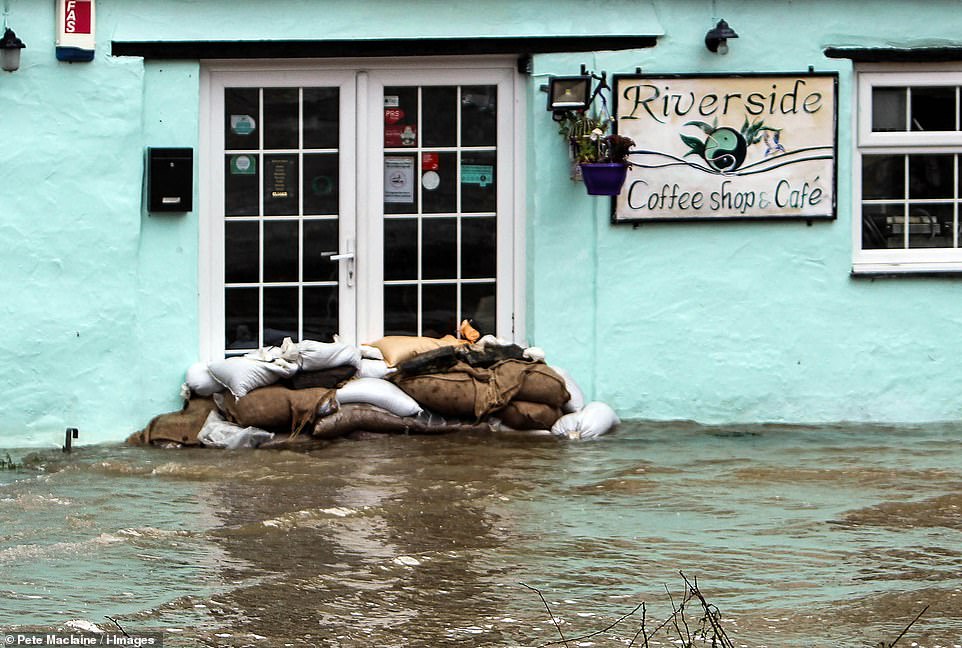 Some 198mm of rain fell on the village of Libanus, Powys, in the 36 hours to 6pm on Saturday – more than the 169mm expected for the whole of October.

Wind speeds of 77mph were logged at Capel Curig, North Wales, on Friday, while the coast of Pembrokeshire was lashed with 60mph gusts throughout the weekend.

There were dramatic scenes in West Wales yesterday when the rivers Towy and Teifi burst their banks, sending torrents of dirty brown water rushing into towns and villages.

Police warned residents of Carmarthen to stay indoors and others to avoid travelling to the town as deep flood waters submerged cars and overwhelmed homes and businesses.

Floods were so intense in parts of Wales on Saturday, horses grazing in fields risked drowning and had to be rescued

Families were evacuated from their homes and thousands of sandbags were deployed.

Former Carmarthen mayor Alun Lenny, said: ‘These are the worse floods to hit Carmarthen since 1987. The old town bridge was shaking with the force of the water.’

A Carmathenshire council spokesman added: ‘Flood defences on the River Towy in Carmarthen breached for the first time in their history.

‘Homes and businesses have been flooded across the area. Some residents were evacuated and found alternative accommodation. Thousands of sandbags have been used.’

Elsewhere, a flock of around 100 sheep were washed away by floods in Pontargothi, Carmarthenshire, on Saturday.

One person wrote on Twitter that they had seen sheep ‘floating down the river Towy.’ Police said anyone who comes across washed-up sheep should call 101.

Welsh council workers will today begin the gruelling task of clearing up debris and re-opening roads and bridges closed off by the floods.

Storm Callum moved eastwards yesterday, bringing heavy rain to the South East. Much of Wales will see a dry and sunny day today as the clean-up operation begins.

Luke Miall, a Met Office forecaster, said: ‘There will be patchy rain in parts of the South today, but Wales will see dry and sunny weather which is good news for them.

‘By tomorrow, things will turn dryer for all of England and Wales. Temperatures will be in the mid-teens, which is about normal for this time of year.

‘From Wednesday to Friday we will see drier weather with lots of autumnal mist and fog around, perhaps even some frost in the morning.

‘Most of us will see bright, sunny days this week, although there is a chance of wetter weather in the north through the latter part of the week.’ 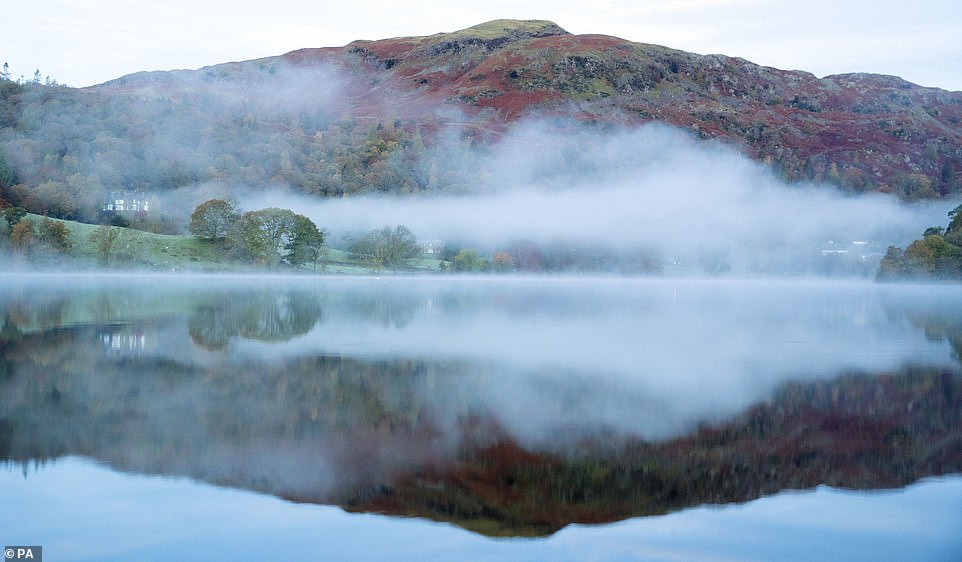 Huge clouds of fog are pictured over Grassmere Water in the Lake District, Cumbria this morning as other parts of Britain battle torrential rain 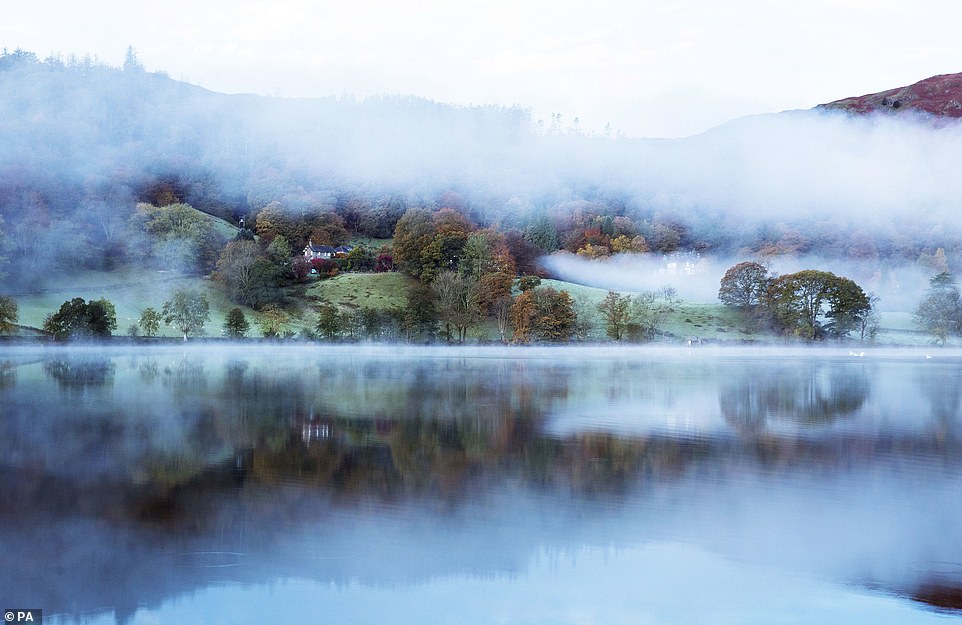 Autumn scenes: The red and orange trees are pictured reflected into Grassmere Water in the Lake District on a foggy day 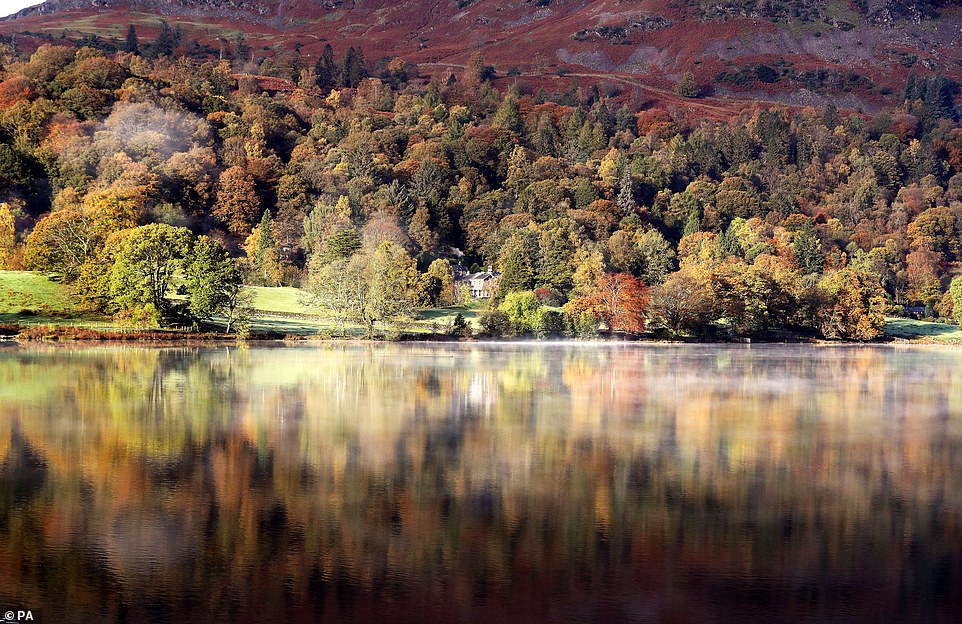