When the war is over/Got to get away/Pack my bag to no place/In no time, no day.

As a minute’s silence fell upon Melbourne’s Shrine of Remembrance at 11am on November 11, with the Last Post’s final notes still ringing out, the scent of burning eucalyptus mingled with cannon smoke. 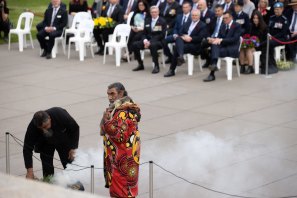 On Thursday, several thousand observers gathered to pay their respects to more than 102,000 Australians who lost their lives to wars, conflicts and peacekeeping operations since Federation. It was the first large crowd to gather at the Shrine in many long months.

Bunurong elders Uncle Shane Clarke and Uncle Mik Edwards performed a smoking ceremony and offered a Welcome to Country, lighting eucalyptus leaves and other native flora from the eternal flame in the Shrine’s forecourt before bathing guests and grounds in cleansing smoke.

It was a coming together of experiences; the first time either ceremony had been held during Remembrance Day commemorations at the Shrine. 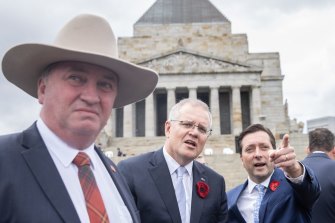 At this place designed to honour the more recent past, Uncle Mik urged all Australians to remember the First Nations people who came from earlier times, and to be aware of the history beneath their feet.

Making up the bulk of the crowd were veterans from conflicts including Vietnam, Korea, the Gulf and Afghanistan and their families. 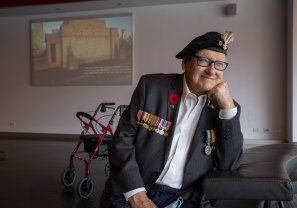 David Purvis, 94, who served as a captain in Vietnam.Credit:Simon Schluter

One of them, 94-year-old Captain David Purvis, served in Vietnam with the 4th/19th Prince of Wales’s Light Horse Regiment after 15 years in the Army Reserve.

He was laden with his own medals on the left of his jacket and those of his late brother, Commodore Ian Purvis, who served in Korea, on the right.

Captain Purvis, who turns 95 in two weeks, never missed a Remembrance Day service before the pandemic, and was pleased to do so again.

Near the end of the ceremony, the RAAF Band performed Cold Chisel’s often-covered hit When the War is Over.

While opinions vary whether the ballad is an ode to romantic love gone wrong, or a soldier returning to war, there’s little doubt as to the power of its lyrics.

Ain’t nobody gonna steal this heart away…