This is the heart-stopping moment a car windscreen cracks after thugs throw a large object from a bridge onto it.

Footage taken on a dash cam shows the car driving along the busy ring road between Oakridge and Popley, Basingstoke, and approach a footbridge.

Three people can be seen running to take aim at the car and throwing a large round object, which looks like a football, which lands with a thud on the windscreen. 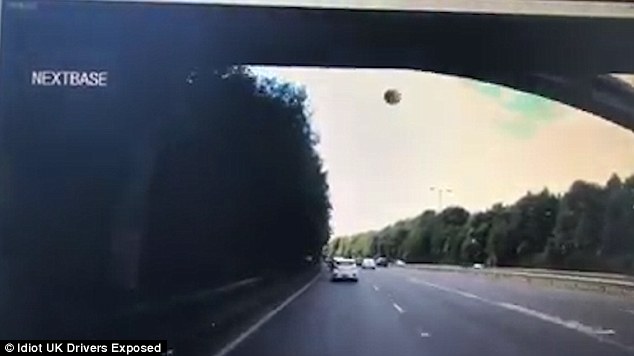 Footage shows a car driving along the busy ring road between Oakridge and Popley, Basingstoke, as a large object is thrown at the windscreen by thugs

The driver in the clip, which has been slowed down, can be heard making a noise in shock as the object hits the glass at full force and cracks it.

The extremely dangerous moment prompted police to release the footage on Twitter appealing for any information.

Police say the driver was ‘shaken’ after the shocking incident.

Basingstoke Police released a statement: ‘Item thrown from foot bridge over the ring road between Oakridge and Popley near The Reading Road roundabout inat 17:20 on Friday 17th August. This left the driver very shaken. This is a request for any information which could assist the investigation.’ 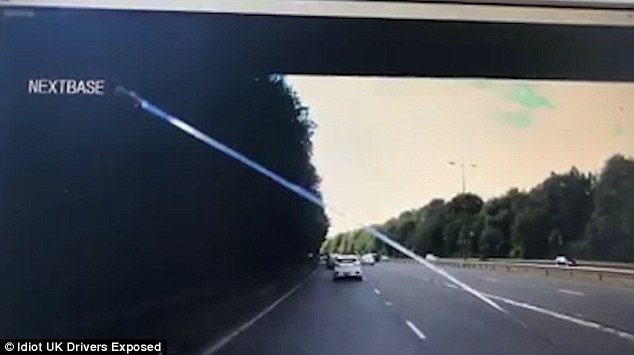 The dash cam clips shows the cracked windscreen after the object, which looked like a football, was thrown at it in full force 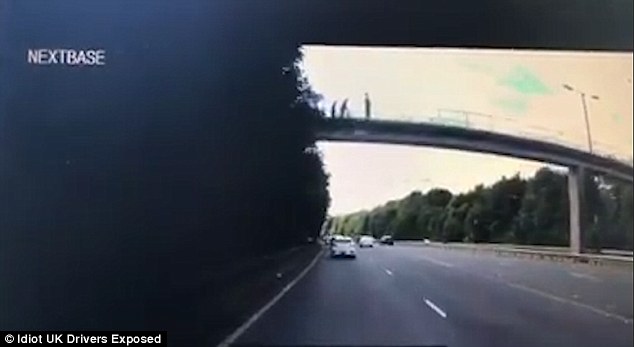 Three thugs can be spotted from a footbridge take aim. Police are appealing for information after the driver was left ‘very shaken’

Users on social media were shocked by the frightening footage.

One user wrote: ‘This is not a harmless prank. People have been killed by this same stunt.’

Another user said: ‘I’ve had this before. A rock thrown from a bridge and hit the screen of the HGV I was driving at the time. Scares the life out of you.’

One user wrote: How can these idiots not know the consequences of their actions?I hope that they are caught but I seriously doubt it.

another user wrote: ‘I hope they catch them! Throwing anything off a bridge is definitely intent on causing danger and harm to people ‘