Home » World News » China debate is one we have to have, but let’s do it sensibly

The Chinese have a phrase that is among the most used in their official language. That phrase, in Mandarin, is "bu fang bian". It means, literally, not convenient or, simply, inconvenient. 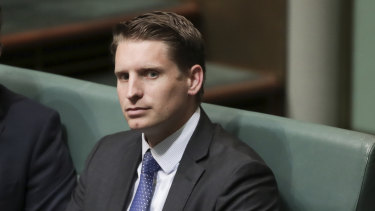 Former SAS captain Andrew Hastie said “choices will be made for us” unless Australia confronted the reality of China’s ambitions.Credit:Alex Ellinghausen

Liberal backbencher Andrew Hastie’s contribution to the debate about how to manage relations with China, in which he compared that country with Nazi Germany, is definitely bu fang bian, as far as Scott Morrison is concerned.

The timing of Hastie’s intervention in the China debate for a Prime Minister preparing for a visit to Washington in which managing China’s continued rise – and resisting American anti-China pressure – will dominate discussion is, well, inconvenient.

Morrison brushed off Hastie’s intervention in the hope no doubt that his hawkish backbencher’s words would quickly get lost in the swirl of events. "I don’t really think it’s offering anything new," he said.

This is what Hastie said in an op-ed in The Age and The Sydney Morning Herald that was ill-timed from the government’s perspective against the background of hawkish Australian and US ministerial (AUSMIN) discussions in Sydney aimed at China.

"The West once believed that economic liberalisation would naturally lead to democratisation in China. This was our Maginot Line. It would keep us safe, just as the French believed their series of steel and concrete forts would guard them against the German advance in 1940. But their thinking failed catastrophically."

In other words, China’s threats to Western civilisation are such that conventional means of dealing with the threats are redundant. In Hastie’s view the West, broadly defined, needs to move to a technology-driven war footing in dealing with the perfidious Chinese.

Leaving aside whether you agree with Hastie’s extreme views about a Chinese "threat", his op-ed has further stimulated a debate the country needs to have about how to manage relations with Beijing and, perhaps more to the point, neutralise pressures from Washington to join a US-led anti-China wedge.

This is one of the most testing moments for Australian foreign policy in the history of the Federation. Morrison and his advisers bear special responsibility to get the policy settings right in an environment in which miscalculations can do a lot of damage to the national interest.

For a start, the government needs to be extremely wary of getting suckered into a militarised China containment policy – by whatever name – that would further exacerbate regional tensions. 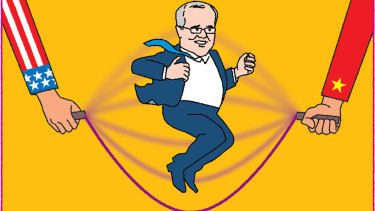 In a juxtaposition that summed up Australia’s China policy dilemma, Trade Minister Simon Birmingham was in Beijing pleading with the Chinese to ease restrictions on thermal coal imports at the very moment bombastic US Secretary of State Mike Pompeo was in Sydney seeking to co-opt Australia in an anti-China front.

In all of this there is no point minimising China’s ruthless ambition to be the dominant power in the Asia-Pacific.

What is required in these circumstances is sophistication in policymaking that leaves astern the John Howard dictum that Australia does not need to choose between its history and its geography.

The question then becomes: what is the choice?

Put simply, the choice lies somewhere between pretending it can be business as usual in the Asia-Pacific or joining an American-led cavalry aimed at weakening and isolating China.

Neither is an option that serves the national interest.

What is required is policymaking along lines outlined by Morrison in a thoughtful speech to Asialink – Where we live –  in the lead-up to the Osaka G20 summit in June. This was a speech that exposed what might be described as the "Morrison doctrine" in dealing with a new era of strategic rivalry that is threatening to tear apart our region and rupture global economic growth. Space does not permit more than a summary of the Morrison address beyond that he made a strong case for a heightened Australian role in seeking to mitigate tensions.

"We should not sit back and passively await our fate in the wake of a major power contest," he said.

Morrison should keep this phrase firmly in mind when he is being sweet-talked in Washington to align Australia with a hawkish mindset that might serve American interests but not those of Australia.

Let’s consider the Hastie contribution. He might be regarded as a fringe dweller in the China debate, but the fact is he represents a forceful grouping in various think tanks and in the bureaucracy itself whose China-sceptical views are amplified in the conservative media.

Hastie is perfectly entitled to his bu fang bian opinions. In some ways, it’s not a bad thing he has defined the China conundrum as starkly as he has. This is a debate we need to have. However, government ministers and officials have a responsibility to push back against extremist language that risks further damage to a precarious relationship.

This does not serve the national interest.

Tony Walker was a correspondent in Beijing for Fairfax newspapers and the Financial Times (1979-83 and 1993-98).