Shortly after magistrate Peter Dunn struck out the criminal charges privately filed by anti-government activists against Premier Daniel Andrews, a mob of 250 protesters who had descended on the small alpine town of Myrtleford turned and started chanting at the courthouse.

“Give us justice,” they said. “Remove this government.” 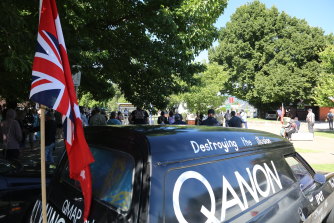 “Give us justice,” they chanted at a mostly empty court, “Remove this government.”Credit:David Estcourt

But what the group, many of whom travelled up from Melbourne, didn’t plan for was that the court was almost empty. The hearing was taking place via video link, with the parties watching on from their homes and offices.

Hundreds still flooded the town square, where police were waiting for them. Police arrested one protester for unrelated charges. Demonstrators maligned and threatened officers, accusing them of corruption as they led him away.

Despite some of the views put forward on social media, the case was no scandal, no day of reckoning, no conspiracy that was being suppressed by the mainstream media. It was a private prosecution: a criminal charge that can be filed in court by any Victorian provided they pay the $85.70 fee. Police and prosecutors have no involvement in the charges.

As one barrister described, they have a reputation for being brought by the wacky and obsessed. Courts throughout Victoria have been rejecting applications like this from activists, but for reasons unknown, this one made it through to a hearing before being struck out. 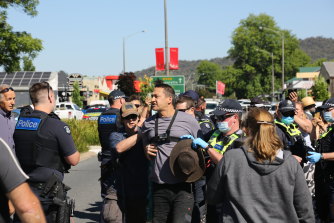 A man is arrested at the rally.Credit:David Estcourt

Filed by sovereign citizen Anthony Herman, these charges alleged fraud and “misprision of treason”, or concealing treason, against the Premier. It took the magistrate about 30 minutes to dismiss the baseless accusations in an online hearing that quickly descended into chaos. The Age makes no assertion as to the motivation of Mr Herman or his beliefs.

Over 900 people logged on to the Webex link to watch the case. The magistrates court portal buckled under the weight as it struggled to mute the constant interruptions.

Some of those in virtual attendance posted images of Mr Andrews photoshopped onto a portrait of Kim-Jong Un. A child was heard asking for food in the background. Someone left music by pop idol Nicki Minaj blaring in the background. One woman logged on from bed, another questioned whether the hearing had been faked.

On the web link, court staff battled to mute those causing chaos. In the real world, muting the protesters if far more difficult. That didn’t stop one Myrtleford resident from trying. 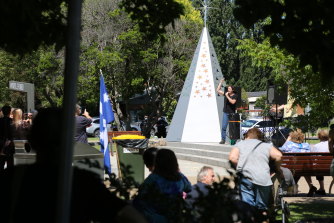 A demonstrator addresses the crowd.Credit:David Estcourt

Just after 8.30am, when the crowd of protesters was barely larger than a dozen people and huddled near a black van emblazoned with QAnon conspiracy theories and links to websites, a local woman, probably in her 50s and seemingly dressed for work, approached them.

“Conspiracy theory nut jobs,” she yelled at the group. “You’re the ones ruining the world. You crazy morons. You’re so arrogant, and you think you’re above everyone else.”

“And you’re so judgmental,” one shot back.

The woman’s feelings were mirrored by others in the small regional town, about 30 to 40 minutes from Wangaratta, not far from where Mr Andrews spent his formative years. 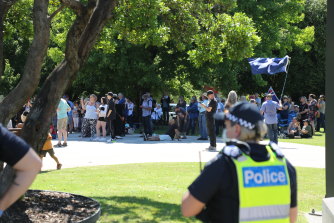 A small business owner who did not want his name published told The Age the episode was “embarrassing”. Others carried on with their day and tried to ignore it.

While most protests in the past 20 months have questioned the legitimacy of public health policy responses like lockdowns and vaccination mandates, the pandemic was only occasionally mentioned by speakers in Myrtleford on Friday.

While organisers of the movement have seen their support swell, they have enjoyed very few victories in politics or law.

Immediately after the case was tossed out by Mr Dunn, an organiser took to the microphone: “They just threw it out, we have to start all over again.” 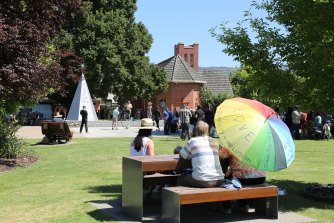 Protesters listen to a speech at the rally.Credit:David Estcourt