Russia has taken several Ukrainian villages in the last few days, soon putting its forces in a position to seize the strategically important cities of Sievierodonetsk and Lysychansk in the country’s east.

The Russian advances have led to “hellish battles” in the area, the governor of Luhansk region, Serhiy Gaidai, said.

If Moscow’s army can encircle the two cities and cut off “the road of life” from Ukrainian-controlled territory, the cities would be likely to fall within days. That would give Russia control of the Luhansk region.

“The threat of a tactical Russian victory is there, but they haven’t done it yet,” said Oleskiy Arestovych, an adviser to Ukrainian President Volodymyr Zelensky. 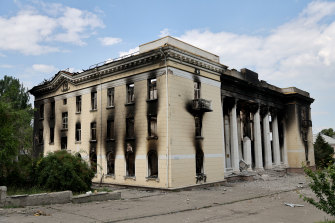 A building scarred by war in Lysychansk, Ukraine. Few residents remain in the city as it undergoes frequent shelling from Russian troops.Credit:Getty Images

Gaidai confirmed that Russian forces had captured the villages of Pidlisne and Myrna Dolyna and were making a “partially successful” attack towards the settlement of Bila Gora, targeting police, state security and prosecutors’ buildings as they went.

“Hellish battles in Sievierodonetsk and surrounding villages, massive shelling on Lysychansk, and hostile attempts to cut the ‘road of life’,” he said in an update on social media. “The enemy is trying to establish full control over Sievierodonetsk.”

The advances bring the Russians closer to the T1302 highway linking the cities with Ukrainian-controlled territory, and leave Ukrainian forces in Zolote, a town guarding the southern flank of the Lysychansk salient, almost surrounded.

“Victories and successes are colossal,” Andrei Marochko, an officer in the separatist army of Luhansk, told Russian state television. 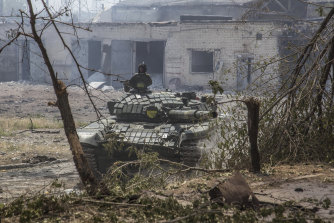 A Ukrainian tank is in position during heavy fighting on the front line in Sievierodonetsk, the Luhansk region, Ukraine, earlier this month.Credit:AP

In Zolote and Hirsk “there is a full encirclement of Ukrainian troops”, he added, also claiming “a group of foreign mercenaries” had been eliminated.

“Very soon [Ukrainian] groups in Lysychansk and Sievierodonetsk will also be surrounded,” he added.

Capturing Zolote would allow the Russian troops to approach Lysychansk on the right bank of the Siversky Donets river rather than attempting to force a crossing.

Ukrainian commanders had hoped to use the river as the next line of defence against further Russian advances if and when Sievierodonetsk falls. Previous Russian attempts to force a crossing have ended in disaster.

Russian and Ukrainian forces have been batting for Sievierodonetsk, the administrative capital of the Luhansk region, for nearly two months as Vladimir Putin seeks to capture the last Ukrainian-held part of the region.

Russian attempts to cut the T1302 have so far failed, and fierce fighting has seen parts of the town change hands more than once. But Ukrainian forces are now believed to be confined to an industrial facility to the east of the river.

German journalists reporting in Lysychansk came under fire on the road as they left the city on Wednesday. Paul Ronzheimer, of newspaper Bild, said the town was “almost encircled” and posted a video of a shot-out window in his car.

The Institute for the Study of War, an American think tank, called the development a “clear setback” for the Ukrainians, but said Russia could still face protracted battles to capture Lysychansk itself. The separatist Donetsk People’s Republic has acknowledged more than 2000 military personnel killed and almost 9000 wounded since the beginning of the year, the British Ministry of Defence says. That was equivalent to about 55 per cent of its original force.

Russia has also stepped up attacks on Kharkiv in an apparent attempt to reverse gains made by a Ukrainian counter-offensive in April and May.

Zelensky accused the Russian army of “brutal and cynical” shelling in the region during his nightly video address.

On Tuesday an investigation into the death of a Ukrainian photo-journalist concluded that he was murdered by Russian soldiers. Reporters Without Borders said it had “overwhelming” evidence Maks Levin and his friend Oleksiy Chernyshov, a soldier, were executed “in cold blood” in a forest north of Kyiv in March.