US coronavirus cases top FIVE MILLION: America reaches bleak milestone in battle against the virus which shows no signs of ‘going away’ as predicted by President Trump

The number of confirmed coronavirus cases in the US surpassed five million Sunday morning, according to the Johns Hopkins University tally.

The US number of cases is by far the highest in the world, but health officials believe for every reported case, there are roughly 10 times as many people infected due to testing limits and the unreported number of unreported or unrecognized infections.

The bleak milestone was reached as new cases in the US stand at about 54,000-a-day.

Trump has said over 24 times that the virus will ‘go away’ but the nation’s mounting infection toll proves the virus is far from gone.

A heat map of confirmed coronavirus cases in the US above on Sunday with California, Florida, Texas, New York and Georgia being the hardhit 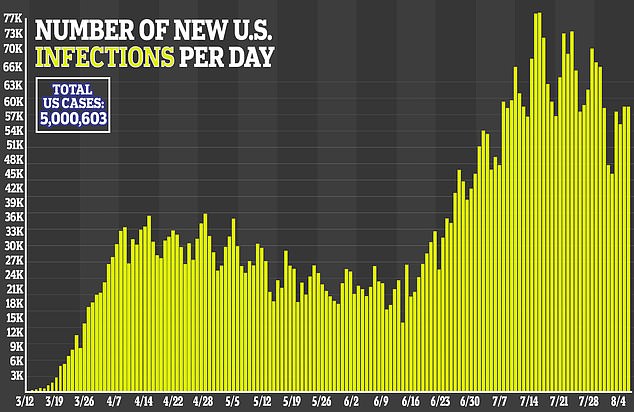 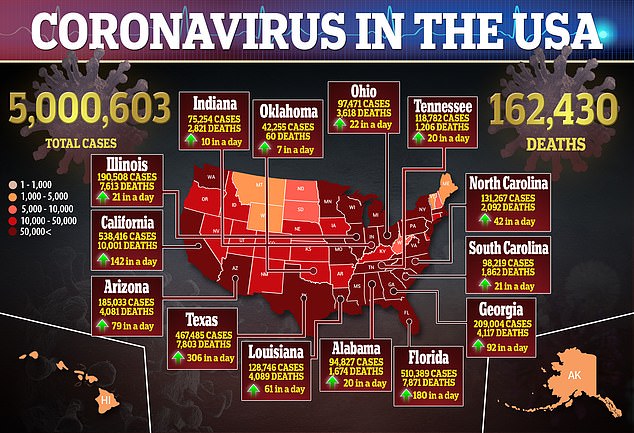 While the current rate of new infections is less than the 70,000 daily cases reported in the second half of July, cases are rising in nearly 20 states, and deaths are climbing in most.

Many Americans have resisted wearing face masks and social distancing.

This week five states account for more than 40 percent of all infections in the country leading with California, Florida, Texas, New York and Georgia.

California reported over 7,000 new cases on Saturday for a total of 545,000 throughout the state and a positivity rate of six percent over the past two weeks.

New York, which was once the country’s epicenter, has managed to handle the coronavirus crisis and now reports a positivity rate  of about 0.93 percent, according to the governor’s office. The positivity rate indicates the number of people who test positive for the virus compared to how many people were tested.

The state is reeling from a very high positivity rate of 16.79 percent on Friday. That number is just shy of the state’s mid-June high of 17.43 percent.

While the positivity rate declined for months, it started to rise again in August.

On Sunday Florida’s Department of Health confirmed 6,229 additional cases of COVID-19 bringing the total to 532,806 and the statewide death toll to 8,186. On Friday the state’s positivity rate was eight percent.

In Georgia there are 213,427 cases of the virus, there have been over 4,000 deaths and there are currently over 20,000 hospitalizations for the virus.

The nation’s failure to contain the spread of coronavirus has been met with astonishment and alarm in Europe.

Italians were unprepared when the outbreak exploded in February, and the country still has one of the world’s highest official death tolls at 35,000.

But after a strict nationwide, 10-week lockdown, vigilant tracing of new clusters and general acceptance of mask mandates and social distancing, Italy has become a model of virus containment.

Much of the incredulity in Europe stems from the fact that the US had the benefit of time, European experience and medical know-how to treat the virus that the continent itself did not have when the first Covid-19 patients started filling intensive care units.

Italian health minister Roberto Speranza has not shied away from criticising the US, officially condemned Washington’s decision to withhold funding from the World Health Organisation and has expressed amazement at President Donald Trump’s virus response.

More than 162,000 have died from the virus in the US and European nations have barred American tourists and visitors from other countries with growing cases from freely travelling to the bloc.

France and Germany are now imposing tests on arrival for travelers from ‘at risk’ countries, including the US.

‘I am very well aware that this impinges on individual freedoms, but I believe that this is a justifiable intervention,’ German health minister Jens Spahn said last week. 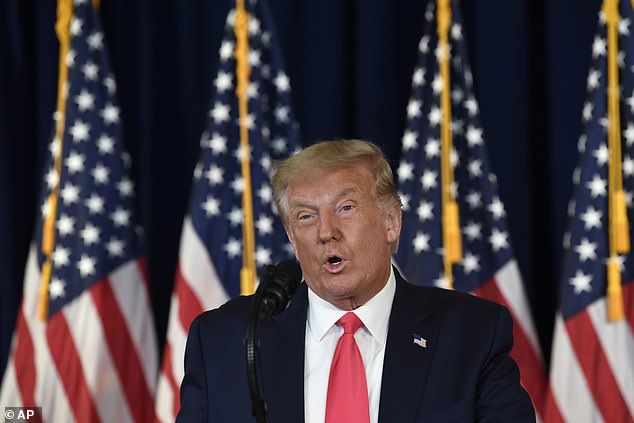 Mistakes were made in Europe, too, from delayed lockdowns to insufficient protections for nursing home residents and critical shortages of tests and protective equipment for medical personnel.

The virus is still raging in some Balkan countries, and thousands of maskless protesters demanded an end to virus restrictions in Berlin earlier this month.

Hard-hit Spain, France and Germany have seen infection rebounds with new cases topping 1,000 a day, and Italy’s cases inched up over 500 on Friday.

The UK is still seeing an estimated 3,700 new cases a day, and some scientists say the country’s pubs might have to close again if schools are to reopen in September without causing a new wave.

Europe as a whole has seen more than 207,000 confirmed virus deaths, by Johns Hopkins’ count.