WOMEN are dying more of Covid now than in the first wave, analysis of official figures has suggested.

Experts say it could be because they are more vulnerable to the new coronavirus strain running rampant across the UK. 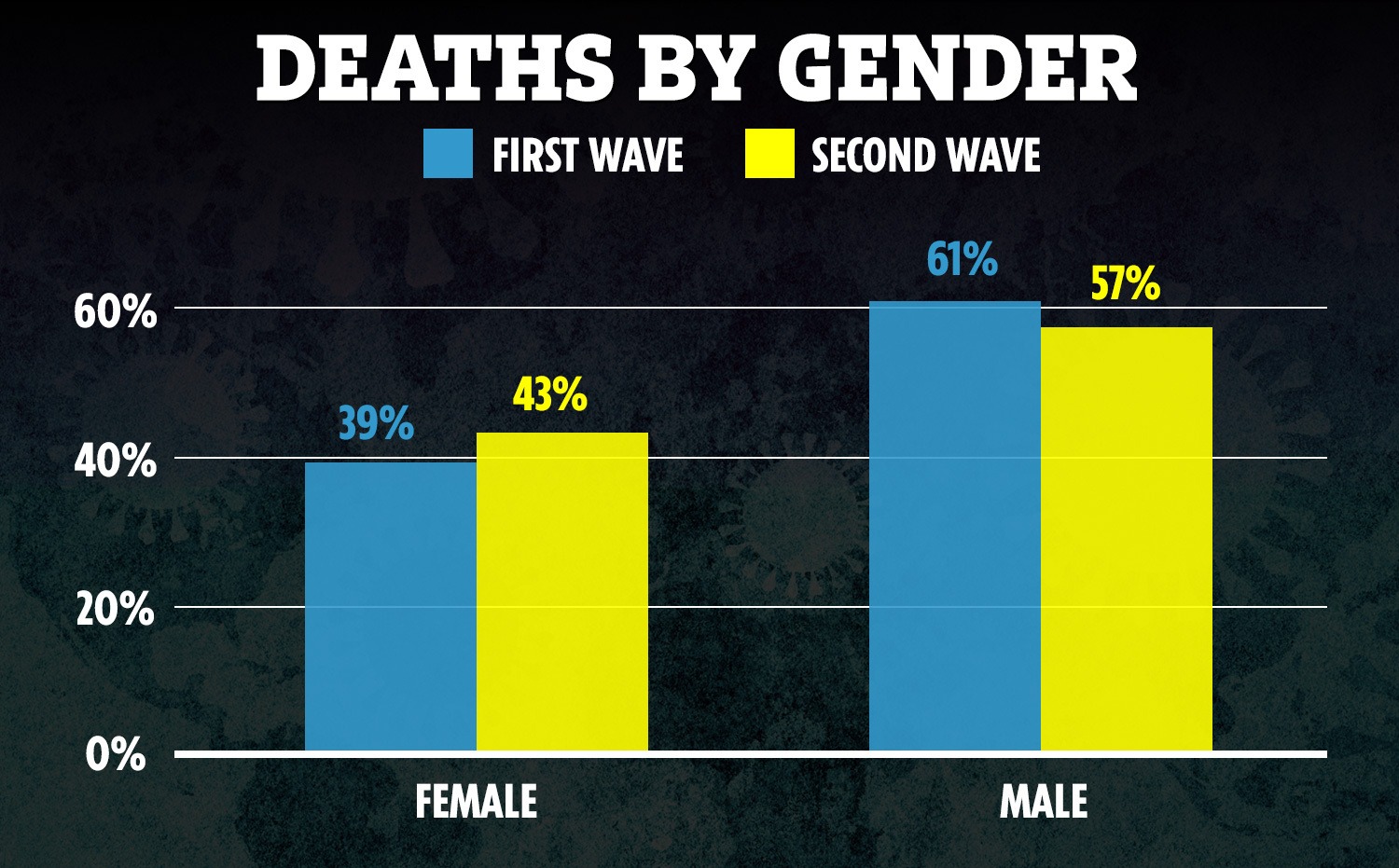 White people are also dying in higher numbers than previously, while deaths among people of ethnic minority are declining.

Dr David Strain, a senior clinical lecturer at the University of Exeter, said there are a number of hypothetical reasons for the shift in trends.

One of them, he told The Sun, is a change in the virus: "If we imagine everyone has a certain threshold of viral tolerance.

"If the amount of virus they come into contact with is above that threshold the exposure turns into the disease.

"Now the virus is more virulent, you need much lower amount to cause the infection, therefore people who previously were unlikely to catch the disease before (young fit women) are suddenly vulnerable."

Young people – those under the age of 60 – are still dying of Covid in relatively low numbers, and slightly less often than in the spring.

But doctors say they being admitted to hospital now more than ever before.

Dr Strain warned of a change in behaviour over the course of the pandemic, saying: "Younger patients, particularly white females, have been lulled into a false sense of security.

"Hearing on a regular basis that you are low risk means you are more likely to take the risks."

The figures, from NHS England, come as hospitals come under extreme pressure to treat a record 32,070 Covid patients.

The figure is up 20 per cent compared to last week, and up 81 per cent since Christmas Day.

But Stephen Powis, the National Medical Director of NHS England, warned that the UK is yet to see the impact of allowing households to mix at Christmas.

How have death statistics changed?

The analysis of hospital deaths conducted by The Times reveal a slight change in mortality trends.

The paper classed the "first wave"as deaths between January and May 2020.

It then looked at deaths between December 2 and January 6, referred to in this article as the "second wave".

The UK is typically considered to be in the second wave, which started in September, and although started to improve at the end of November, is now worse than ever before.

The analysis for the second only covered one month of deaths, but a statistician believes it is likely the trends will remain the same moving out of this current wave.

Kevin McConway, an emeritus professor of applied statistics at The Open University, told The Sun: “Obviously that wave is still going on, indeed still getting worse, and there will indeed, sadly, be people who were in hospital on January 6 who will die in coming weeks.

“However, I’d be very surprised if those later deaths would make a big difference to comparisons of deaths by age, gender or ethnicity.”

Men are still dying in higher numbers than women overall, but there is more of a balance between the genders now compared to the spring.

In the first wave, 61 per cent of deaths were men, and 39 per cent were women.

A range of reasons have tried to explain why men are more at risk of deadly Covid-19, including that it comes down to genetic differences that affect the immune system.

Some experts say men's blood makes it easier for the coronavirus to infect cells.

Men have more of the ACE2 enzyme – which the virus uses to enter cells and start replicating.

Dr Strain said: "The more of this enzyme, the less virus you need to cause the disease."

However, he said the new strain may find it easier to cause disease in those who have lower ACE2 levels.

Prof McConway said: “The differences in deaths between men and women are still going in the same direction as they did in the first wave, when many more men were dying than women.

“It’s still true that many more men are dying than women, and that’s been the case throughout the current wave (and indeed the whole autumn), but the difference in deaths between men and women is a bit smaller than it was in the first wave.”

Research has shown that people of black, Asian and ethnic minority groups (BAME) are more impacted by Covid-19 – they are more likely to catch it and die, studies have shown.

This is thought to be largely a result of living in more urban and crowded areas, working in front-facing jobs, and having more underlying health conditions.

However, 11 per cent of deaths between December 2 and January 6 were in those of ethnic minorities. 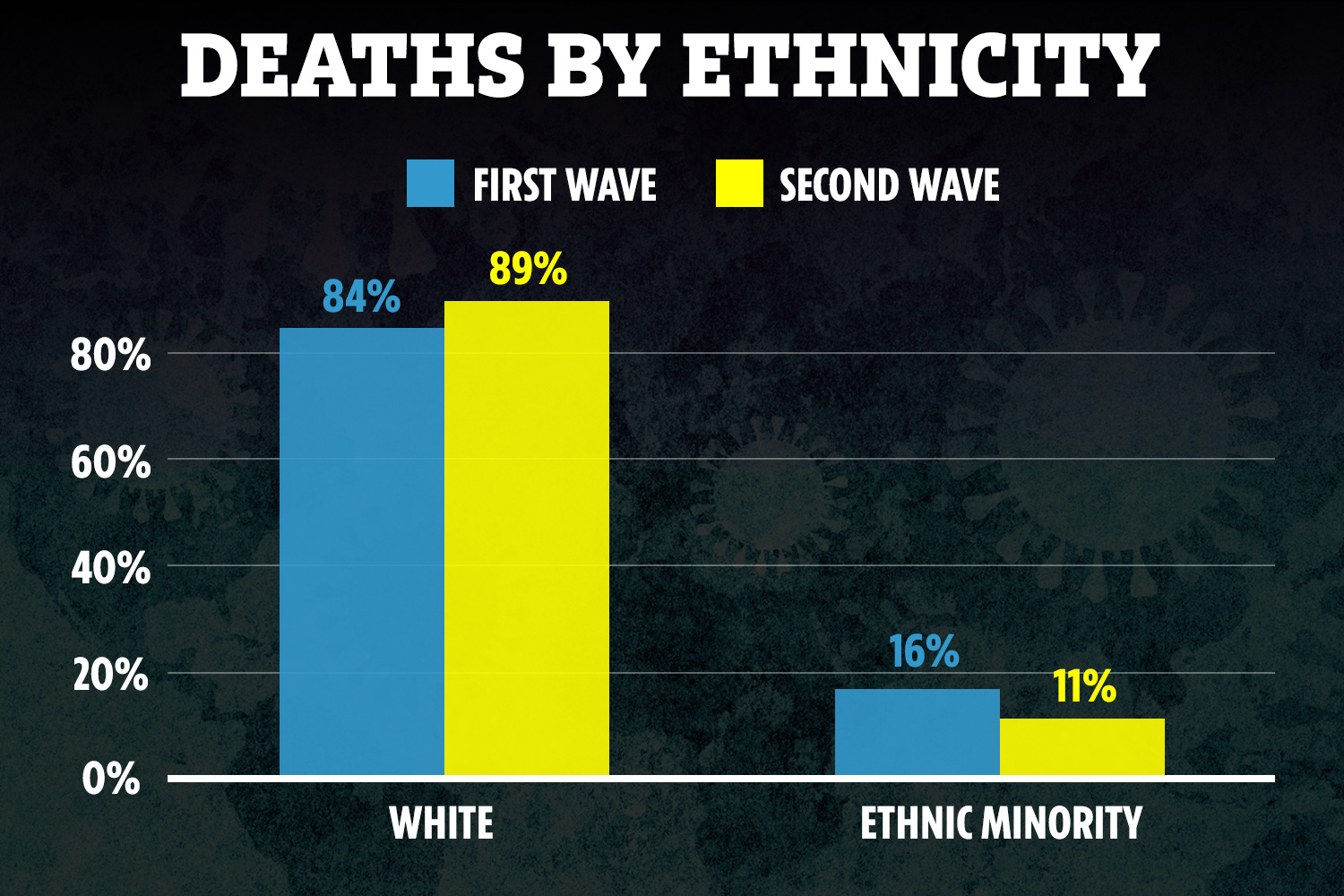 Meanwhile, white people are dying in slightly higher numbers than before, the data suggests.

They accounted for 84 per cent of deaths in the first wave, which, considering around 86.5 per cent of the population are white, was an under representation.

But now 89 per cent of deaths are in white people.

However, once people for whom there is no ethnicity data are included, white people are not disproportionately dying, the paper claimed, suggesting mortality rates have evened out.

Prof McConway said “given that the change in the ethnic balance of deaths isn’t very big, I think that it will still be the case that BAME people are more likely to have died than white people, allowing for age”.

Some doctors have claimed there are more young people on wards now, when the new strain is running riot across the UK, than in the first wave.

Sir Simon Stevens, the chief executive of NHS England, said yesterday one in four coronavirus admissions to hospital were for people under the age of 55.

And Public Health England data shows there has been a steep rise in the numbers of people between 40 and 60 becoming seriously ill with Covid and being admitted to intensive care units, and a slight rise in younger adults, the BBC reported. 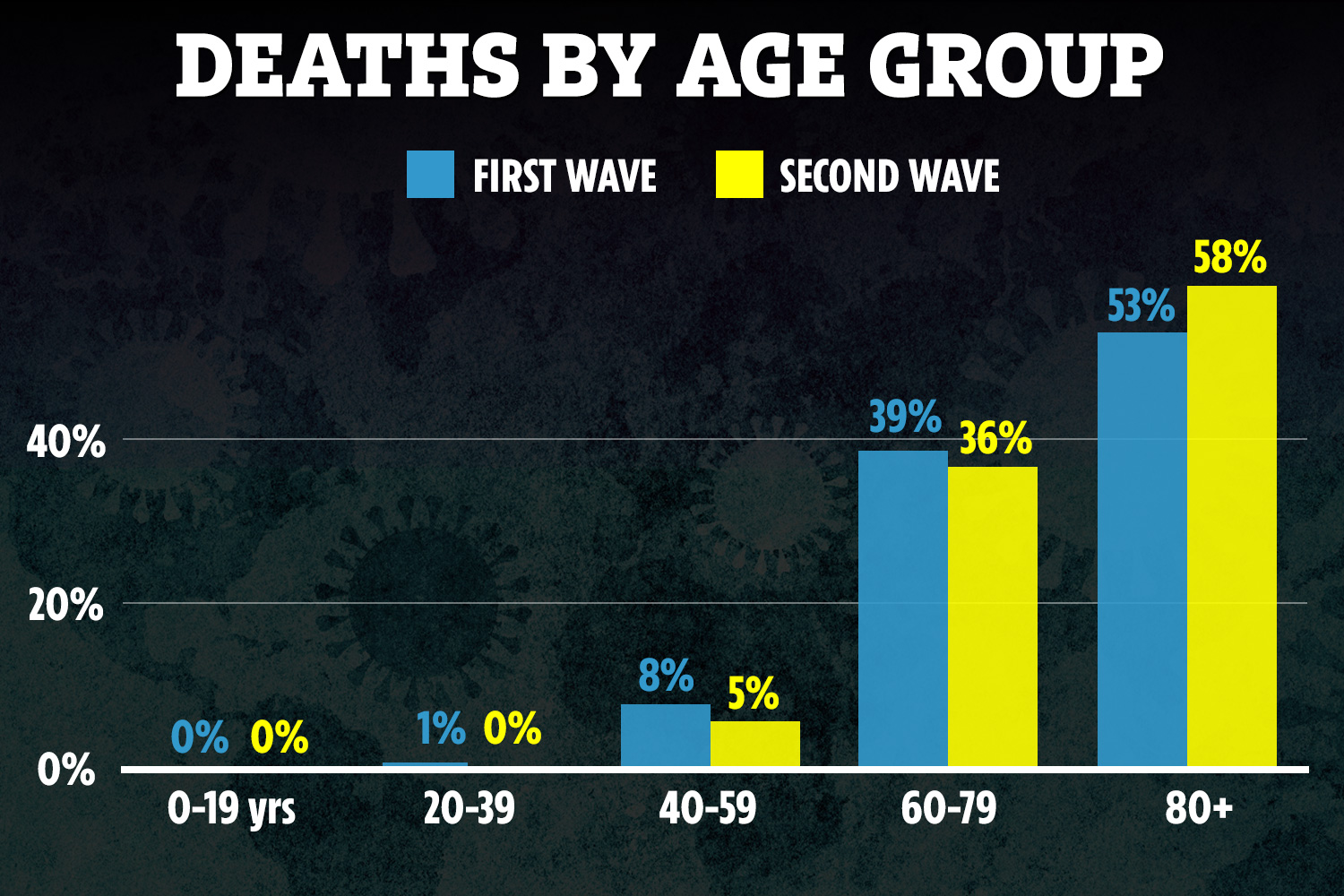 However, figures show younger age groups are not dying at higher rates now than in the spring.

Eight per cent of deaths in the first wave were people in their 40s and 50s, which has dropped to five per cent.

It may be that younger people are being seen in hospitals more now than ever simply as a result of higher coronavirus admissions across the board.

Covid-19 strikes people of all ages, but it is the eldest who are most at risk of dying from the disease, hence why they are at the top of the priority list for a Covid vaccine.

People of younger ages can still get critically ill and die. But there are no signs the new variant is more severe.

But Dr Strain warned young people may be at more risk of long Covid, which causes persistent symptoms even after recovery from the virus itself.

He said: "[It] does appear to be affecting younger fitter females more than other groups.

"Yes that definitely is our experience, the average age of hospitalised patients is getting younger.

"Last week there were approximately 400,000 new cases. The bigger worry is that approximately 40,000 of the predominantly younger (<40) fitter population will have lasting symptoms making it difficult to function in their normal activities."

People without health problems, generally considered at lower risk of severe or fatal Covid, are dying in lower numbers now than in the first wave – 3.3 per cent compared with 5.1 per cent.

But sadly figures are not improving or those with underlying ill health, which may include diabetes, high blood pressure or kidney or liver disease. 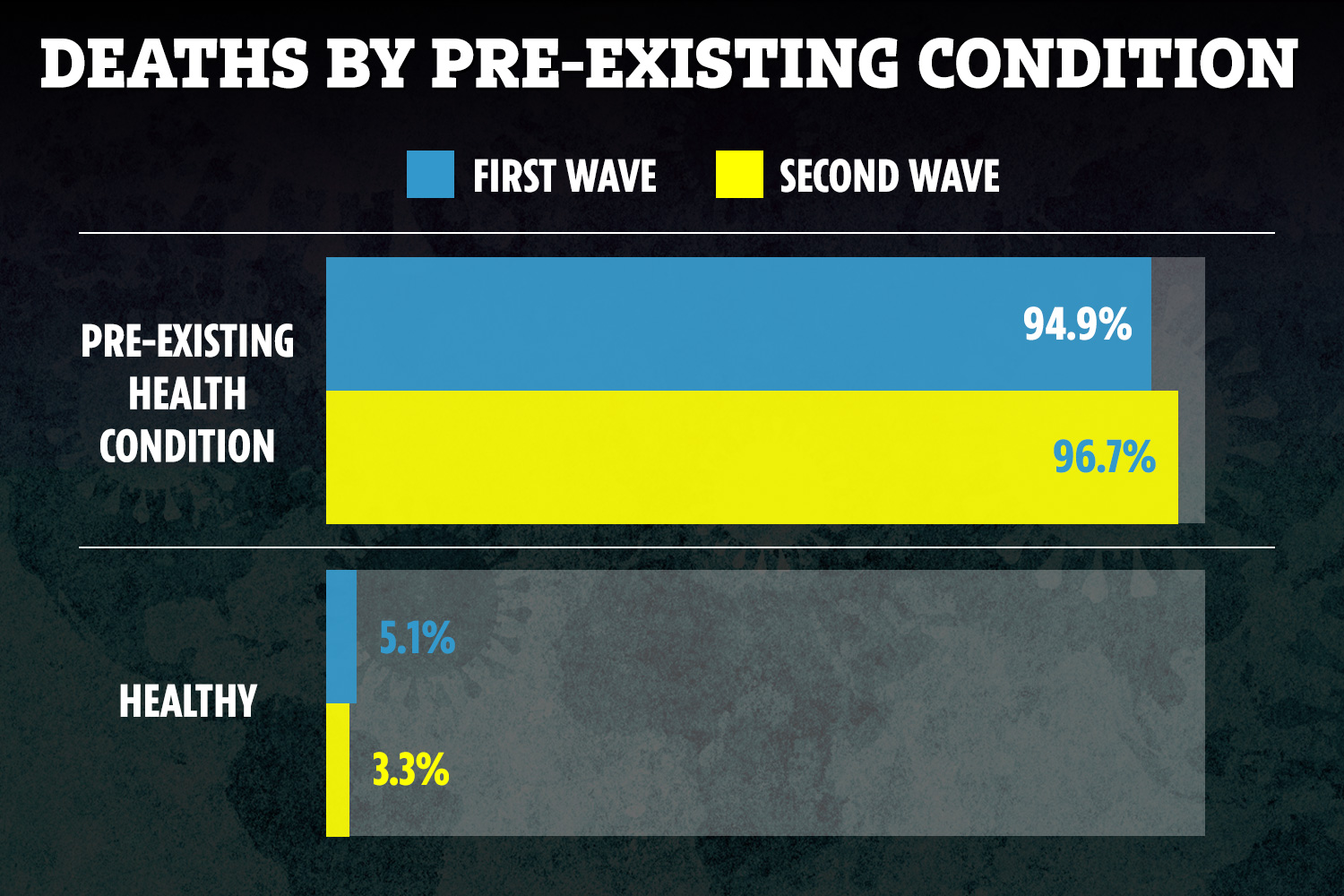 Those with a health condition account for 96.7 per cent of deaths now compared with 94.9 per cent in the first wave.

Simon Clarke, associate professor in cellular microbiology at the University of Reading, said he suspected “that people with pre-existing conditions probably don’t respond as well as people without” to new treatments against Covid.

Potentially thousands of lives have been saved by drugs such as dexamethasone, which is used for critically ill patients in hospital.