Covid was in Italy in NOVEMBER: Country’s earliest confirmed case is found to be 25-year-old woman from Milan

Italy has identified a new ‘patient zero’ who had the coronavirus in November 2019, in the latest piece of evidence that Covid-19 was already circulating in Europe before China alerted the world to the outbreak in Wuhan.

A 25-year-old woman from Milan had a skin biopsy after suffering a rash and a sore throat that November, producing a sample which a new study says shows evidence of the virus.

The findings published in a British medical journal suggest that the disease had already reached northern Italy by the autumn of 2019 – weeks before the previous earliest known case, a four-year-old boy who had the virus in December.

The woman becomes Italy’s newest ‘patient zero’, but researchers believe the disease was in the country before November. Blood samples taken from cancer patients in Milan and later tested for Covid have suggested the disease was present in September.

But China did not inform the WHO of the outbreak in Wuhan until December 31, and Beijing has since been dogged by claims that it covered up the epidemic in its early stages.

Italy did not detect its first case until late January 2020, and weeks later it became the first Western country to be hit with the full force of the pandemic’s destruction. 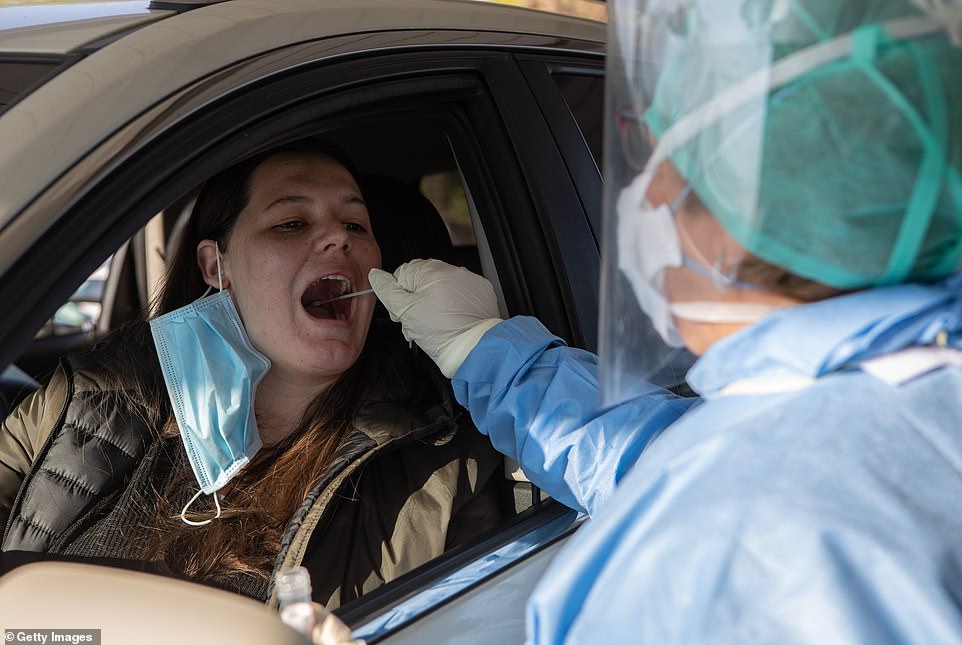 A 25-year-old woman is believed to have had the coronavirus in Italy early as November 2019, in the latest piece of evidence that the disease was already circulating in Europe before China alerted the world to the outbreak in Wuhan (file photo) 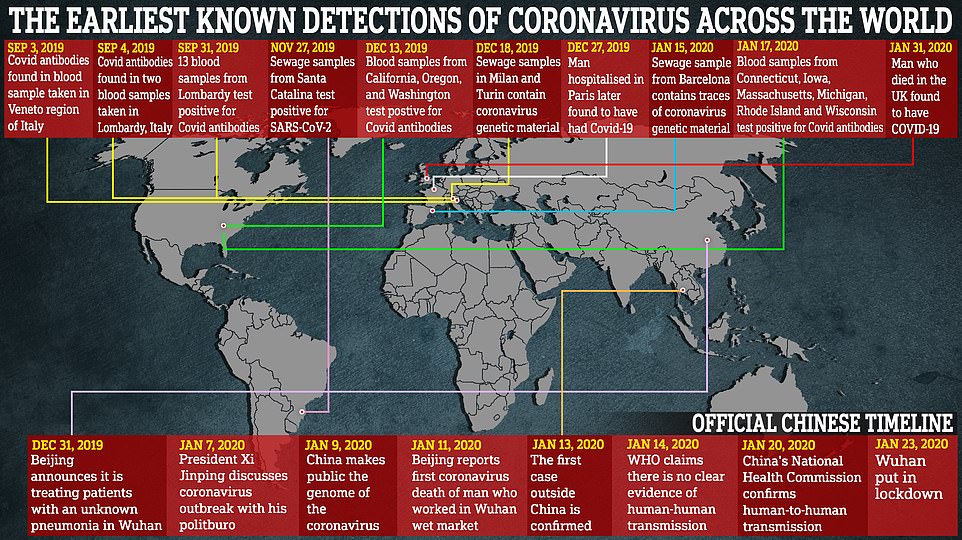 Dec 8, 2019 – Earliest date that China has acknowledged an infection

Nov 10 – Milanese woman has a skin biopsy, producing a sample which later shows signs of the virus

Dec 1 – Chinese researchers report an infection on this date in a peer-reviewed study, but it has not been acknowledged by Beijing

The woman now thought to be ‘patient zero’ had sought medical help because of a skin rash and a sore throat.

Health experts say a skin rash is one of the less common symptoms of Covid-19, along with diarrhoea and headaches.

She had a biopsy and her symptoms later cleared up, but skin researchers kept the sample and compared it to those of known Covid-19 patients.

The findings ‘lead us to believe that our patient could represent the oldest case in literature of detection of the virus on tissue sample,’ researchers wrote in the British Journal of Dermatology.

But ‘probably, continuing to search, we would also find it on samples from October 2019,’ Rafaele Gianotti, the lead researcher in the latest study, told ANSA.

In June last year, the woman tested positive for antibodies, suggesting she had been infected and recovered some time earlier.

Her biopsy took place on November 10, 2019, Italian media says, a month before the four-year-old boy who was the subject of a previous study gave his swab sample in Milan.

The boy had developed a cough by November 21, and his symptoms later worsened into breathing problems and vomiting which led him to go to hospital.

On December 1, he developed a measles-like rash, and it was assumed at the time that measles were the cause of his illness.

However, a swab sample on December 5 was later confirmed to be positive for SARS-CoV-2, the scientific name for the coronavirus.

Separately, a study by Italy’s National Cancer Institute late last year suggested that the virus could even have been spreading as early as September 2019.

Researchers found that dozens of volunteers involved in a trial from September 2019 until March 2020 had developed antibodies against Covid-19 by February.

This included 23 out of 162 patients who had their samples taken in September, although further details about these patients were not given – meaning the woman in the latest study is the first identifiable virus patient in Italy.

Italian researchers said in March that they reported a higher than usual number of cases of severe pneumonia and flu in Lombardy in the last quarter of 2019 in another sign that the virus might have circulated earlier than thought.

Other studies have suggested that the virus was already present in France, Brazil and the United States before the end of 2019.

In May, French scientists said they had found evidence that a man was infected as early as December 27, having thought he had the flu.

The 42-year-old had no known links to China, suggesting that ‘the disease was already spreading among the French population’, researchers said. 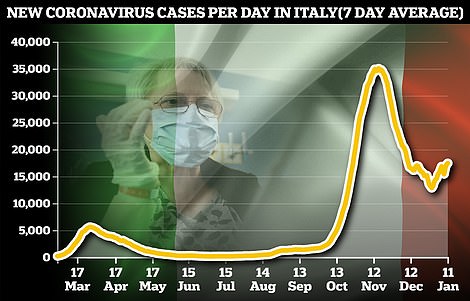 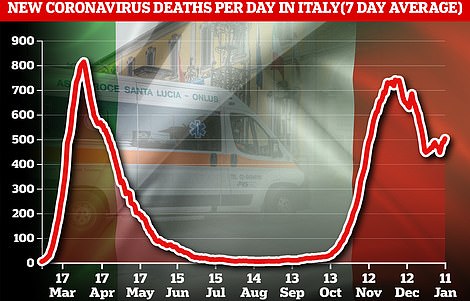 Italy became the first Western country to feel the full force of the pandemic’s destruction early in 2020, before suffering a resurgence in infection rates (left) later in the year. Italy was also the first country in Europe to pile up hundreds of daily deaths, a grim reality which has returned in recent months (right)

In Brazil, wastewater samples collected in the city of Florianopolis in November 2019 were also found to contain traces of the virus.

Another study on sewage samples from Barcelona found traces of the disease in January 2020, more than a month before the city’s first official case.

It was not until December 31, 2019 that the WHO’s China office was informed of a mystery pneumonia which had sickened 44 people in Wuhan.

Later, the WHO was informed that at least one patient in Wuhan – a major transport hub – had been showing symptoms as early as December 8.

On January 5, the WHO was still saying that there was ‘no evidence of significant human-to-human transmission’ of the virus.

China has always denied allegations of a cover-up, reacting angrily to calls for an international investigation into the origins of the virus, but there have been persistent doubts about the accuracy of the figures it releases.

Numerous reports have detailed how China withheld key details about the virus in its early stages, including from the WHO which has praised China in public.

A young doctor, Li Wenliang, was reprimanded by police after trying to raise the alarm about the disease – and later died of it. 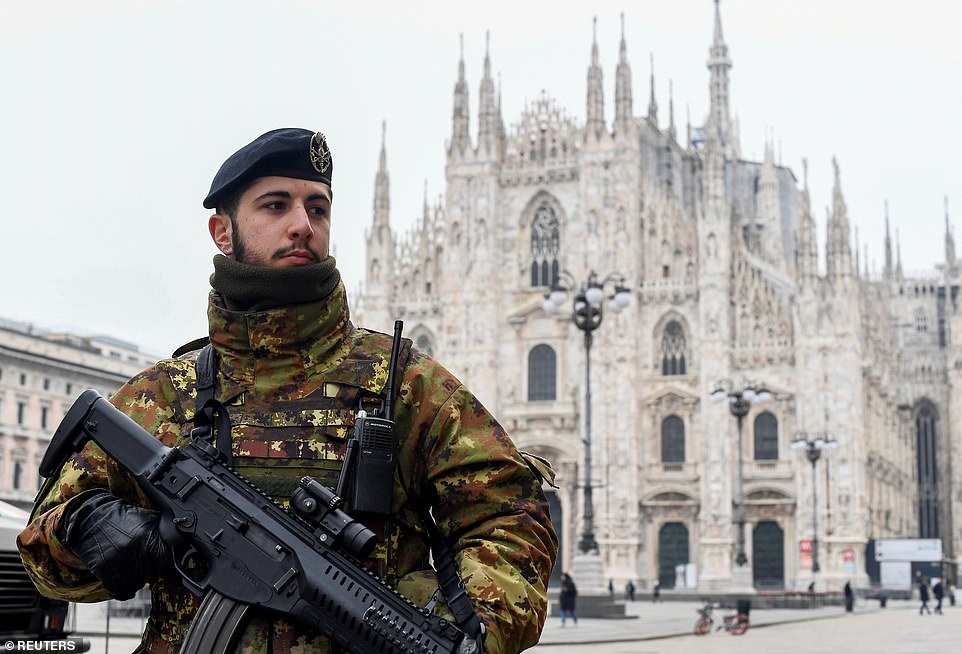 The findings suggest that the virus was spreading in Italy months before Europe’s first major outbreak began, forcing a national lockdown previously regarded as unthinkable in the West (pictured, a soldier stands guard in Milan)

The WHO says a team of experts will finally arrive in Wuhan on Thursday to investigate the origins of the pandemic in a politically fraught mission.

The investigation had been set to start last week but a last-minute hold up over entry permissions in China scuppered plans.

Marion Koopmans, part of the WHO team and head of the viroscience department at Rotterdam’s Erasmus University Medical Center, said they wanted to ‘reconstruct’ how the pandemic started.

Experts say solving the mystery of how the virus first jumped from animals to humans is crucial to preventing another pandemic.

Scientists initially believed the virus jumped to humans at a market selling exotic animals in Wuhan.

But experts now think the market may not have been the origin of the disease, but rather the site of a super-spreader event where the outbreak was amplified.

It is widely assumed that the virus originally came from bats, but the intermediate animal host that transmitted it between bats and humans remains unknown.

Beijing has argued that Wuhan is not necessarily the source of the virus, and Chinese officials have pushed theories that it began abroad.

The virus was first confirmed to have spread outside China in January, when a 61-year-old woman was found to be infected with it in Thailand. 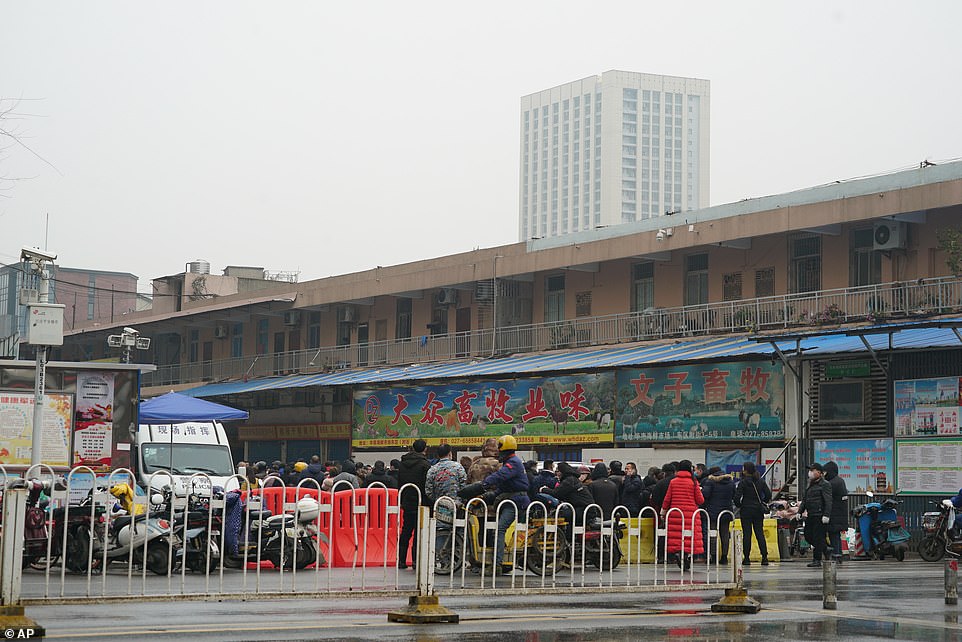 The Huanan Wholesale Seafood Market in Wuhan, pictured last January, was initially thought to be the source of the outbreak – but experts now believe it may have been the site of a super-spreader event which amplified an epidemic that started elsewhere

In the following weeks, Italy became the first country in Europe to pile up hundreds of infections a day, followed by hundreds of deaths, mostly in the wealthy north.

Mattia Maestri, Italy’s first known case of domestic transmission of coronavirus, was diagnosed on February 21, and had not been to China or been in contact with a known case.

In March alone, there were more than 12,000 deaths in Italy, and the country had the world’s largest death toll for a time until the United States surpassed it in April.

Italy was the first Western nation to go into a full-scale lockdown, followed within a few weeks by most of Europe and the United States.

The drastic measures brought the infection rate under control by the summer, but Italy has again suffered badly during the second wave.

After infections fell somewhat over the Christmas period, they are now back to their highest level since early December with 122,000 new cases in the last week.

The death rate has also been climbing again, with the average daily toll rising back above 500 on Monday for the first time since the Christmas lull.

In total, the country has seen 2,289,021 confirmed infections and 79,203 deaths, the second-highest fatality county in Europe after the UK.