EXCLUSIVE: Couples ‘can’t afford to start families’ as cost of raising a child from infancy to adulthood soars, costing the average Brit a staggering £320,000 (the same price as a three-bed home in the Cotswolds!)

Shocking new data reveals Brits could be spending more than £300,000 to raise their children in 2022, as prospective parents say they fear being priced out of starting a family.

From childcare costs, to pocket money, to buying them the latest gadgets, raising children has always been an expensive long-term cost for new mothers and fathers.

But statistics now say it could cost British families upwards of £320,000 to raise a child from infancy to adulthood – the same price as a three-bedroom property in the Cotswolds.

One couple from North London told MailOnline admitted they were shocked at the ‘astonishing’ figures, and said that they have had difficult conversations over the cost of raising a child.

Charities and campaigners have also warned that children from low-income families are among those who will be hit hardest by the cost of living crisis.

According to the charity Action for Children, more than four million children were living in poverty last year as they warned price hikes would hit the poorest parts of Britain hardest.

It comes as the cost of living crisis continues to bite down on the finances of millions of British families.

Driven by surging costs of fuel, food and bills, inflation soared to a new 30-year high this week, rising higher than the 6.7 per cent increase analysts had predicted. 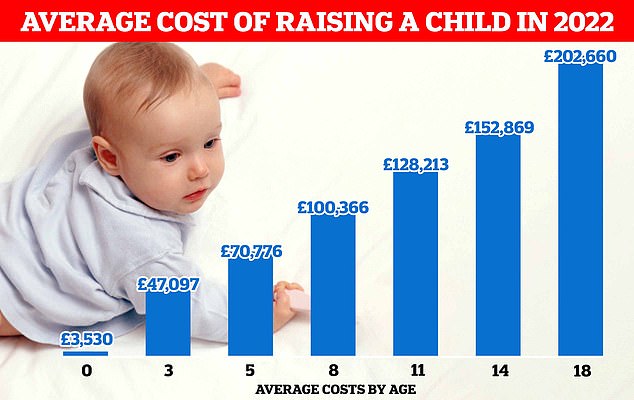 Shocking new data reveals the average Brit could spend more than £300,000 raising their children in 2022, as prospective parents share their fears that they are being priced out of starting a family. The figures above show that by age 18, the average British family will have forked out £202,660 to raise their child 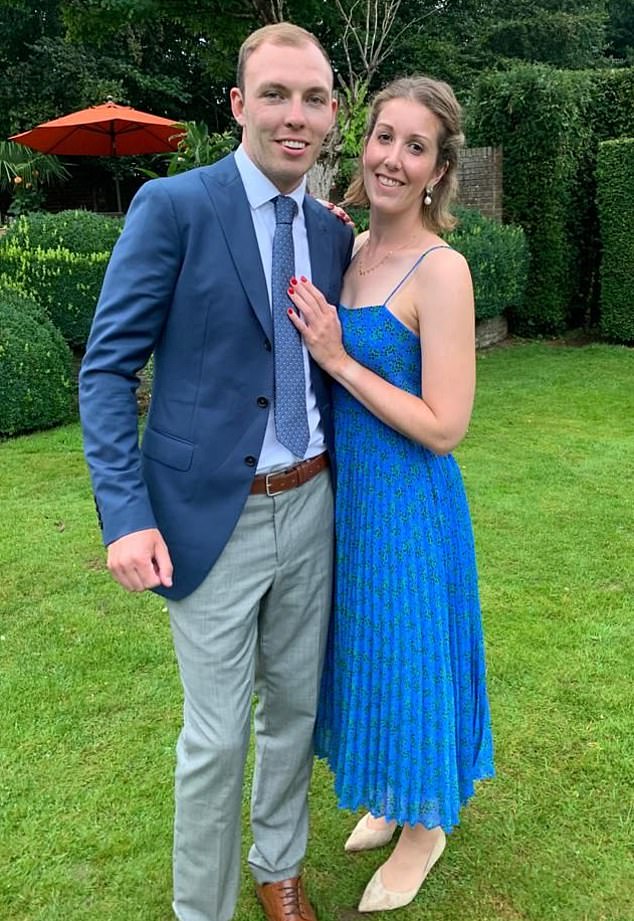 Georgie, 32, (right) and her partner Tim, from North London, shared their concerns at the ‘astonishing’ figures, and admitted that they have had difficult conversations over the cost of raising a child

The statistics reveal the average costs incurred for a family who are expected to feed, clothe, house and provide childcare for their children from the day they are born to their 18th birthday normally reach around £202,000.

The data, released by Moneyfarm, also reveals that the costliest age bracket for parents to contend with is between the ages of 15 and 18 – with the teens costing Brits an average of £49,790 over those three years.

The next most expensive period comes between ages six and eight, with families expected to fork out an average of almost £30,000 in just two years.

Prospective parents have been quick to point out their own concerns to MailOnline.

Georgie, 32, works in communications, while her partner Tim is a primary school teacher based in North London.

The pair say that although they have considered having children, and both would like to start a family in the long-term, they are ‘aware that the cost-of-living crisis will make it more expensive to have kids’.

‘We’re both on the same wavelength,’ Georgie tells MailOnline.

‘Despite both wanting kids, it would take a big financial commitment to have and then raise a child.

‘Particularly in the beginning, with nursery costs, childcare and all the new clothes, it will essentially feel like a second mortgage.’ 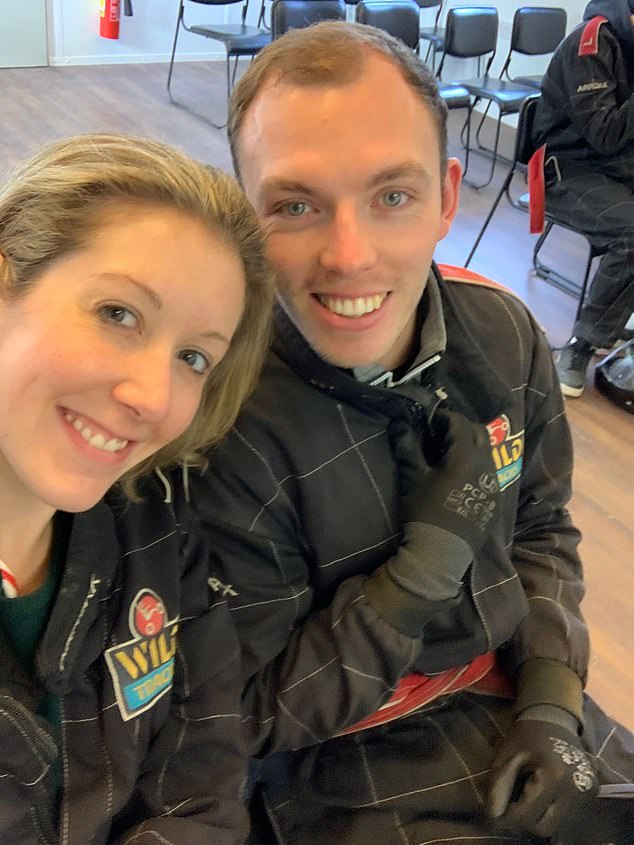 Georgie and Tim say that although they have considered having children, and both would like to start a family in the long-term, they are ‘aware that the cost-of-living crisis will make it more expensive to have kids’ 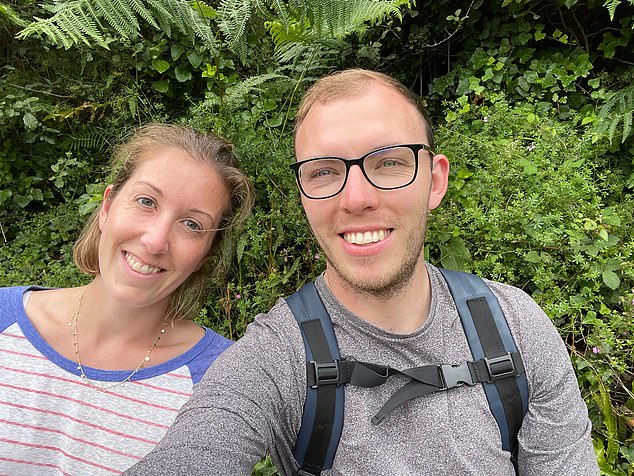 Watching her friends and siblings have children has encouraged Georgie to think more about her own maternal instincts.

But she admits she has had to weigh up that desire with a ‘massive concern’ about the current economic climate.

‘Some people have told me they think they would be better off quitting their job so they can better afford those first years’, she said.

‘I have to admit the current cost of living crisis would put me off from raising a child in the current circumstances. There’s just a massive concern about how we would afford things like nursery costs and childcare.

‘We’d both be reluctant to step away from our jobs and it would be a shame if we felt the need to scale back on our career to help.’

Amid a swirling storm of economic woe for millions of British families, homeowners were hit with a 54 per cent hike to their energy bills just two weeks ago.

Meanwhile, the Bank of England has predicted that inflation could peak at around 8 per cent this month.

Sara Ogilvie, director of policy, rights and advocacy at Child Poverty Action Group, told MailOnline: ‘We’re all feeling the impact of rising costs, but for families with children it’s especially tough. We know things will only get harder and many already have nothing left to cut back on.

‘And now’s the time for government to reflect on the erosion of child benefit, recognising all families need extra support. Investing in our children’s futures is vital.’

But not every couple who are expecting children are fearing the worst.

Ed Salmon, 26, and his wife Katie, of Milton Keynes, are expecting their first child within the next few weeks.

The couple agree if they wouldn’t be put off by the current cost of living crisis if they were to have another child in the near future.

Mr Salmon told MailOnline he wasn’t overly concerned with how the sudden surge in prices could affect his young family.

‘Families have always been able to get by, even those that have nothing’, he explains.

‘We’re lucky that we are in a fairly good financial position, with our own house, but even if we didn’t have that I think we would still want to have kids, even in the current climate.’ 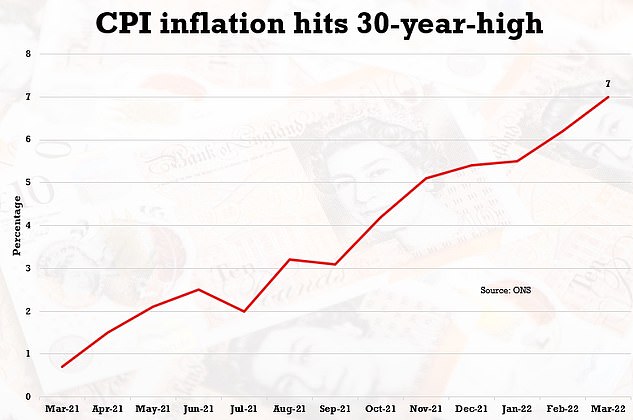 The rate of Consumer Prices Index inflation increased to 7 per cent in March from 6.2 per cent in February, the Office for National Statistics has said. 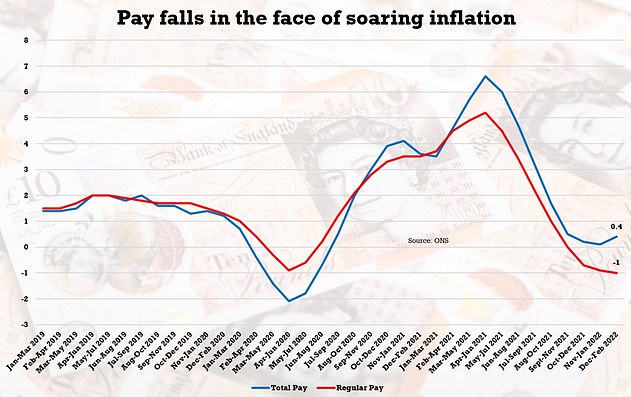 Last week, Labour said the average annual cost of a nursery place for children under two had risen by nearly £1,500 in five years, putting a strain on working families.

Analysis by the party also suggested that for primary school children, the average cost of an after-school club had risen 17 per cent over the same period.

It comes after a recent survey by Pregnant Then Screwed and Mumsnet found that 40 per cent of mothers were having to work fewer hours than they would like due to childcare costs.

Extrapolating these totals across a school year of 38 weeks, the party found that the average annual cost of a place for children under two has risen by £1,420.44 in five years.

Chris Rudden, Head of UK Investment Consultants at Moneyfarm says, ‘Of all the major milestones in life, starting a family is arguably the most impactful. It’s a commitment that no one takes lightly – financial, social and professional priorities all have to shift.’

‘Whilst the average cost of raising a child from pregnancy to 18 years old is just over £200,000, we are conscious that the reality for many families is not to spend the average on various items, and due to the rising cost of living will opt for more economical choices.