BREAKING NEWS: Democrats start the final night of convention by going high after three days of slamming Donald Trump with focus on the future and message about Joe Biden’s faith before he accepts party nomination to begin real slug-fest with president

The final night of the Democratic National Convention kicked off Thursday night with a positive message about ‘this time next year’ as The Chicks performed the National Anthem.

The star-studded line up will all lead up to Joe Biden officially accepting the Democratic nomination to take on President Donald Trump in November as his remarks will close out the evening.

Day four commenced with repeated testaments to Biden’s faith from those who know him and his religious tradition well in a deliberate contrast to President Donald Trump, who infuriated opponents with his photo-op in front of St. John’s church across from the White House amid protests over the death of George Floyd.

‘Joe Biden goes to church so regularly that he doesn’t even need tear gas and a bunch of federal troops to get there,’ quipped event host Julia Louis-Dreyfus in a stinging joke that fell flat.

Sen. Chris Coons, a friend of Biden’s who now holds his Delaware Senate seat, repeatedly used religious phrases to describe Biden as the convention sought to reintroduce the longtime politician to the nation.

Biden is a practicing Catholic who has made family loss a major part of his political narrative. 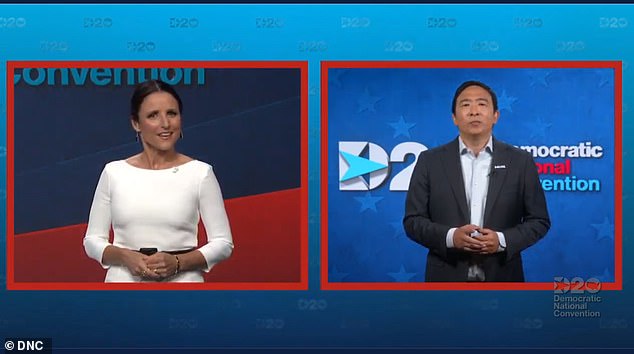 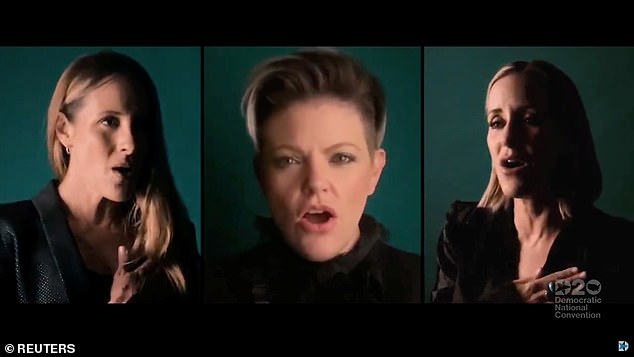 The Chicks, who dropped ‘Dixie’ from their name in the midst of nationwide Black Lives Matter protests, performed the National Anthem 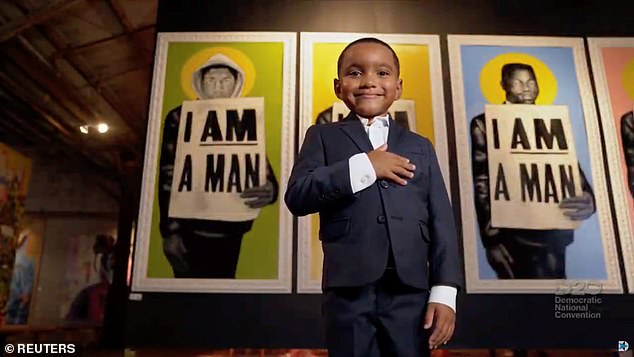 He said Biden would continue the ‘progressive march towards justice’ of civil rights leaders, and try to make people ‘better stewards of creation.’

Coons mention the ‘Original Sins of this nation – slavery and racism,’ and said Biden knew they must be addressed.

He said of Biden’s positions in politics: ‘For him, they’re rooted in faith,’ a faith ‘that’s sustained so many ordinary Americans.’

The convention also played a clip of Biden taking a question at a town hall from the pastor of Charleston’s Mother Emanuel AME church.

‘Reverend, I kind of know what it’s like to lose a family and my heart goes out to you,’ Biden said.

Then he spoke of how church members forgave the shooter who massacred parishioners attending Sunday bible study.

The Rev. Anthony Thompson lost his wife, Myra, during the shooting by a white supremacist at the church in 1915.

The evening began with an invocation by Sister Simone Campbell, a Catholic religious sister. ‘Oh Spirit, breath in us and our leaders a new resolve,’ she said. Her invocation tied faith to ending ‘structural racism, bigotry and sexism.’

The expressions of faith were an obvious effort to draw contrast with Trump, an Episcopalian who rarely goes to church, has made frequent appeals to Evangelicals, and has had some clumsy public events holding bibles and trying to quote scripture.

Outside the Chase Center in Wilmington, Delaware, 100 cars of Biden supporters were parked ready to take in the final night of the convention drive-in movie style.

Oldies music blasted and people had signs and American flags. 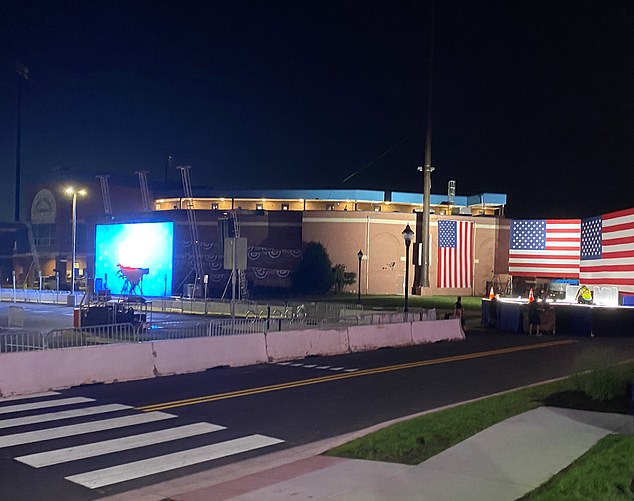 Some supporters will be on-site and take in  Democratic National Convention like a drive-in movie. A stage is also set up for Biden-Harris appearance

A stage was set up for Biden, and his running mate Sen. Kamala Harris, to greet the crowd after he concluded his acceptance speech.

Meanwhile in downtown Wilmington, trucks were driving around in protest with signs and banners reading, ‘I’m Joe Biden and I forget this message,’ and ‘If you can’t complete a sentence, you shouldn’t be president.’

Another had a picture of the ‘2020 presidential debate,’ that showed Biden sniffing Trump’s hair and rubbing his shoulders.

A number of Trump supporters also showed up outside the security perimeter to troll Democrats.

Hunter Biden will also address the convention Thursday night as his sister Ashley will join him to tell the story of their father just ahead of his keynote speech.

The night kicked off with former 2020 Democratic candidate and tech entrepreneur Andrew Yang and actress Julia Louis-Dreyfus speaking ahead of the Pledge of Allegiance and Star Spangled Banner.

Despite the ‘go high’ attitude of the night with a hopeful message for the future, Yang expressed worry over the state of the country currently.

‘We are in a deep, dark hole, and we need leaders who will help dig us out,’ he said.

At the conclusion of his brief remarks, Yang had a rather awkward handover to Louis-Dreyfus, the night’s emcee, as the two made reference to people mispronouncing Harris’ first name by poking fun at Mike Pence.

‘I cannot wait to see her debate our current Vice President, ‘Meeka Pints.’ Or is it ‘Paints’?’ the comedian said, purposely messing up the Vice President’s name.

‘It’s pronounced ‘Pahnce,’ I believe,’ Yang said back in a prepared back-and-forth from their separate video screens.

‘It’s some kind of weird foreign name,’ the Seinfeld and Veep actress dismissed.

Harris is the first ever black woman to ever run on a major party’s presidential ticket – some have also said the half-Jamaican, half-Indian senator’s first name, Kamala, is hard to pronounce.

She was once considered one of those on the short list to become Biden’s running mate.

Perhaps one of the most anticipated appearances from Republicans, however, was from the former vice president’s son.

Hunter Biden’s business dealings in Ukraine and China have been political fodder for Republicans throughout Joe Biden’s run for the White House, with Trump’s impeachment based on the president’s quest to have the Ukrainian president announce an investigation into Joe and Hunter Biden.

He hasn’t been spotted alongside his family during the DNC festivies so far, so it’s unclear if he actually made the trek to Wilmington, Delaware, where Biden and his running mate Sen. Kamala Harris are making their virtual speeches. 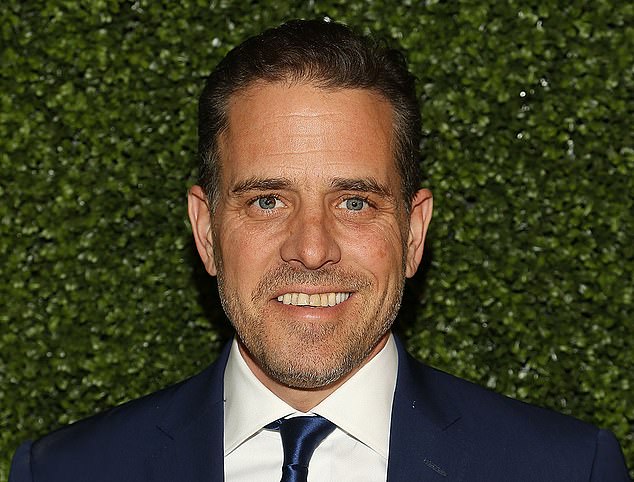 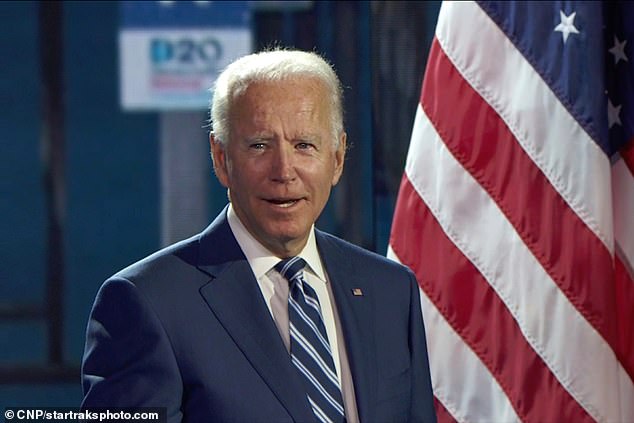 Joe Biden will formally accept the Democratic nomination to take on Donald Trump in November, but his speech is expected to largely steer clear of mention the current president and instead offer a message of hope 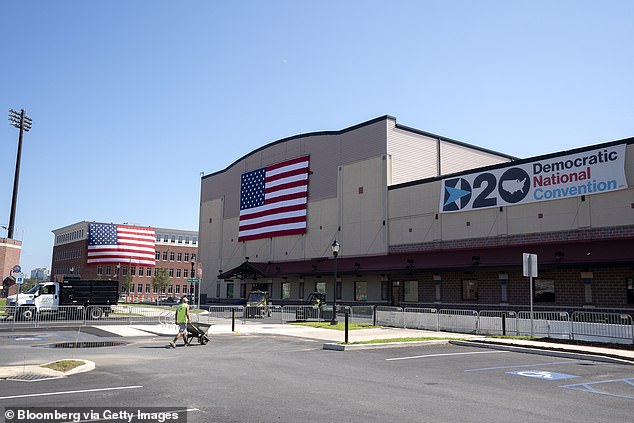 With the Democratic National Convention being held virtually around the country, Joe Biden and Kamala Harris are addressing television and livestream audiences from Biden’s adopted hometown of Wilmington, Delaware at the Chase Center 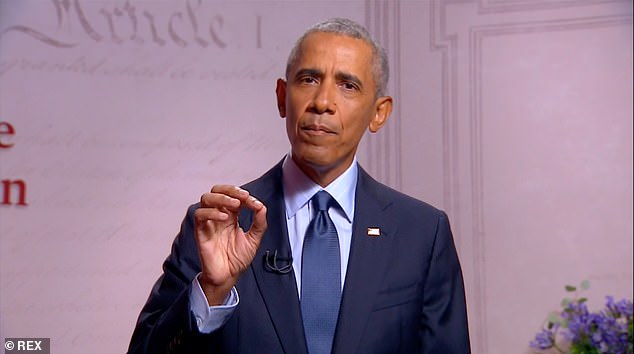 Instead, Biden’s team is letting the past speakers’ statements about the president stand as an argument he should not be reelected – including former President Barack Obama’s Wednesday remarks where he claimed Trump ‘will tear our democracy down’

Harris also accepted the Democrats’ vice presidential nomination at the Case Center as she closed out the third night of the convention on Wednesday.

His campaign has not responded to DailyMail.com’s request for comment on whether Biden will make his address outside, or come out to greet supporters in their cars afterward.

Biden was spotted by TV networks doing a walk-through of the stage earlier Thursday.

The fourth night of the DNC featured a video dedicated to the late Beau Biden, the former vice president’s eldest son – who was Delaware’s attorney general – who passed away from cancer in 2015. The late Rep. John Lewis, who died last month, will also be honored.

The Biden grandchildren will also be featured in a video.

They were on hand in Delaware Tuesday night when Jill Biden gave her virtual address to the DNC, from the school in Wilmington where she used to teach.

The Bidens’ grandkids and daughter Ashley threw confetti at Joe Biden when the Democratic nomination was made official.

Hunter Biden was not in the shot.

Hunter Biden’s personal life has also given the family unwanted attention as he dated Beau’s widow Hallie after his brother’s death, had a child out-of-wedlock with a former D.C.-based stripper and then quickly wed his latest wife, Melissa Cohen, who gave birth to a baby boy in April.

Joe Biden’s speech will be hopeful and forward-looking, as opposed to the dark warning that President Barack Obama offered Wednesday night about re-electing Trump for four more years.

‘This administration has shown it will tear our democracy down if that’s what it takes to win,’ Obama said from his speech location in Philadelphia, Pennsylvania.

In his harshest indictment yet of the man who succeeded him in the Oval Office, Obama called Trump lazy, dangerous, and corrupt, accusing him of abusing the military as props, of gassing peaceful protesters and of being willing to do anything for a second term.

Trump lashed out at his predecessor on Twitter, claiming Obama only endorsed his vice president at the last minute.

‘WHY DID HE REFUSE TO ENDORSE SLOW JOE UNTIL IT WAS ALL OVER, AND EVEN THEN WAS VERY LATE? WHY DID HE TRY TO GET HIM NOT TO RUN?’ the president tweeted in all capital letters.

Biden is expected to take the night off from his public sparring with the president, who has dubbed the Democratic candidate as ‘Sleepy’ and ‘Slow Joe.’

The night will feature musical performances from singer John Legend, who is very vocal in U.S. politics and endorsed Massachusetts Sen. Elizabeth Warren in the Democratic primary, as well as Common, another politically active musician.

The Chicks, who recently dropped the word ‘Dixie’ from their name in the throes of nationwide Black Lives Matter protests, will also perform.

Steph and Ayesha Curry are set to endorse Biden, via video, Thursday night.

Biden’s speech will almost finish out the night, with a virtual after-party planned, being hosted by Bravo’s Andy Cohen.

The president has an interview with Fox News’ Sean Hannity at 9 p.m. Thursday, which is the starting time for the final night of the DNC.