San Francisco: Elon Musk has begun laying the groundwork for a round of layoffs at Twitter, days after taking ownership of the social media platform.

The billionaire entrepreneur, who completed his $US44 billion ($69 billion) acquisition Thursday, has asked managers to draw up lists of team members who could be let go, according to a person with knowledge of the matter. The person asked not to be identified discussing private conversations. 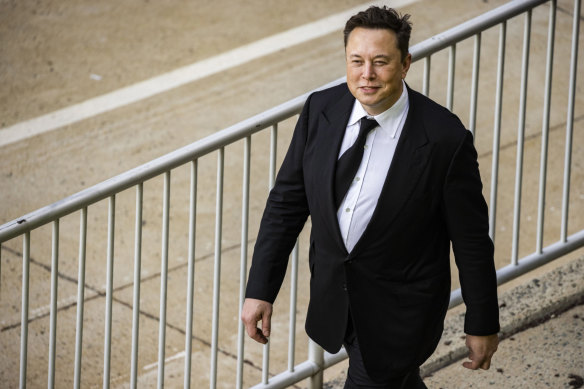 Headcount reduction could commence as early as Saturday, The New York Times reported earlier. A representative of San Francisco-based Twitter didn’t immediately respond to a request for comment Saturday.

Concerns over massive layoffs swirled in the run-up to Musk’s take-private transaction, when potential investors were told that he’d eliminate 75 per cent of the workforce, currently near 7500. Musk later denied that the cuts would be that deep, though he hasn’t elaborated on the job cut plans.

The reductions could be closer to 50 per cent of the workforce, the Washington Post reported on Saturday. One of the first to be impacted will likely be legal, trust and safety, the organisation that oversees content moderation, the newspaper said.

Musk has already axed much of Twitter’s leadership team, including its chief executive officer, finance chief and two senior legal staffers. He plans to be chief executive himself in the immediate term, according to people familiar with the matter.

In recent weeks, Musk has hinted at his staffing priorities, saying he wants to focus on the core product. “Software engineering, server operations & design will rule the roost,” he tweeted in early October. Some staff were invited to a staff meeting next Wednesday; some weren’t, according to people familiar with the matter. That generated suspicion around which teams will be cut.