No ‘business as usual’: EU’s Michel Barnier warns Britain that it faces ‘lots of consequences’ in December if Boris Johnson walks away from a post-Brexit trade deal

Britain will face ‘lots of consequences’ if it chooses to walk away from post-Brexit trade talks with the EU, Brussels’ negotiator Michel Barnier warned today.

After four days of talks with a UK team led by David Frost he told a press conference that the UK could not expect ‘business as usual’ after December if it refuses to give ground.

The two sides have squared off against each other over a wide range of issues, with Mr Johnson tying the UK in to walking away without an agreement by June if there appears to be no progress.

At the end of the first week of talks in Brussels on a free trade agreement, Mr Barnier said reaching a deal would be ‘challenging’.

‘That has a lot of consequences that we have to prepare for. It will not be business as usual. It will be very, very different,’ he said. 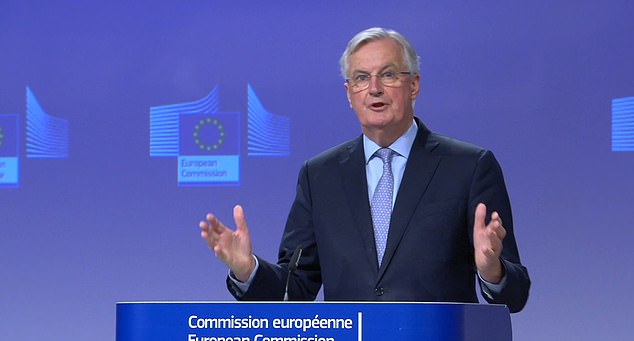 At the end of the first week of talks in Brussels on a free trade agreement, Mr Barnier (pictured today)  said reaching a deal would be ‘challenging’. 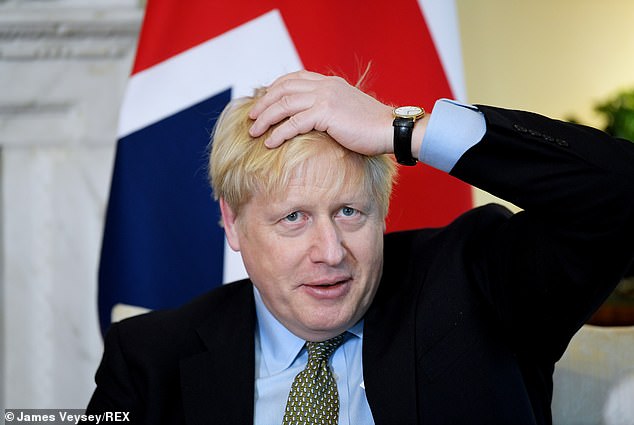 The two sides have squared off against each other over a wide range of issues, with Mr Johnson (pictured today) tying the UK in to walking away without an agreement by June if there appears to be no progress.

‘The definitive changes which will happen because of the decision of the United Kingdom and the difficulties which will be linked to that, my impression is they are very often underestimated.’

The UK insists it wants an off-the-shelf free trade agreement, similar to that the EU struck with Canada.

This would mean shunning almost all tariffs and quotas, and potentially bolting on preferential access for financial services.

Crucially, it would not involve the UK aligning with EU rules or obeying legal edicts from the bloc’s judges.

However, Michel Barnier has said the Canada model is not appropriate as the UK is geographically closer to the EU and the competition issues are different.

He insists that there must be a ‘level playing field’ for trade, with the UK following Brussels’ standards.

The EU is determined to keep access to UK waters after December 31.

France is particularly keen to ensure that its fishermen have generous quotas when Britain leaves the EU Commons Fisheries arrangements.

But Boris Johnson has said: ‘British fishing grounds are first and foremost for British boats.’

Mr Johnson and Donald Trump have vowed to push for a quick Transatlantic trade deal.

However, the US is likely to demand concessions on better access to lucrative UK food markets in return for good terms in other areas.

The EU is trying to thwart the discussions by insisting the UK must stay tied to its food standards rules.

The EU negotiation mandate includes a stipulation Britain should ‘return unlawfully removed cultural objects to their countries of origin’.

The passage is thought to refer to the Elgin Marbles, ancient Greek sculptures taken to Britain more than 200 years ago and now on display in the British Museum.

Greece has been vocal about demanding the marble sculptures, once situated in the ancient Greek Parthenon temple, are returned to Athens.

Downing Street has insisted the future of the marbles is ‘not up for discussion as part of our trade negotiations’.

Last week Boris Johnson put Britain on a collision course with the EU, warning Brussels that the Government would pull the plug on trade talks in just four months time if it did not get its way.

The Prime Minister’s administration wants to see the ‘broad outlines’ of a ‘Canada-style’ deal with Brussels before a planned June summit, according to its confrontational official negotiating mandate.

If the two sides remain at loggerheads Britain is ready to withdraw and and concentrate on preparing the country for a bare-bones situation using World Trade Organisation terms under an arrangement with the EU similar to Australia’s.

The differences include robust provisions on the so-called level playing field which guarantees fair competition between EU and British companies after Brexit, he said.

Another friction point is the fact that Britain wants a separate deal on fisheries to be renewed every year, something Barnier called impractical.

He added London was seeking a series of separate deals, while the bloc wanted a one overarching agreement, which would also give the EU’s top court, the European Court of Justice, a final say on the interpretation of EU laws.

He also said London refused to sign up to the European Convention on Human Rights.

Mr Barnier today warned that Britain’s demand to leave the bloc’s collective fishing rights agreement would be impossible to implement.

‘The United Kingdom does not want the fisheries agreement to be part of our economic agreement, it wishes to negotiate reciprocal access to British waters and European waters on an annual basis, which, and I can say this as a former fisheries minister amongst other things for my country, it’s not practicable,’ he said.

‘There’s hundreds of species, a hundred species or so. What we can do with Norway on five species simply isn’t possible for 100 species.’

Mr Barnier said that from January 1 there would be customs formalities between the EU and the UK, UK financial institutions would lose their automatic passporting rights and British certification would no longer mean industrial goods could be marketed in the EU.

‘Our differences come as no surprise, especially after only one round of negotiations, but some are very, very difficult,’ he added.

‘However, I continue to believe that we can reach a good agreement for both sides. These past few days have been constructive.’