‘D minus, must try harder!’ Angry father marks and grades letter from education boss fining him for taking son on term-time holiday which was littered with spelling mistakes

A father has shamed a county education boss who sent him an error-strewn letter fining him £60 for taking his son on a term-time holiday.

Daniel Moore, 31, from Exmouth, used a red pen to mark the seven spelling mistakes he found and sent it back to Devon County Council calling it a ‘load of tripe’.

Mr Moore was given a £60 penalty for keeping his son Charlie away from school for five days when they went to Mallorca as a family in May.

Today he called his local authority hypocritical adding he would pay the fine but returned the letter with the message ‘D minus, must try harder!’

Mistakes in the letter, which urges parents to read it carefully, included spellings such as ‘hte’, ‘guitly’, ‘notie’ and ‘dteailed’.

Mr Moore said: ‘I’m not going to pretend I’m a spelling guru or a typing expert. But I’m also not the head of education in Devon.’ 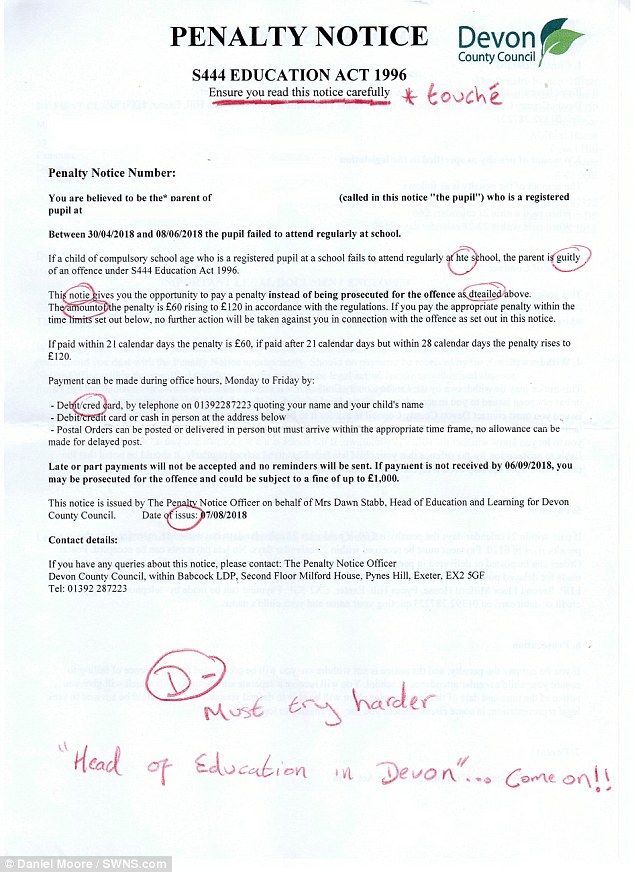 Daniel Moore, 31, from Exmouth, used a red pen to mark the seven spelling mistakes in this letter sent by Devon County Council 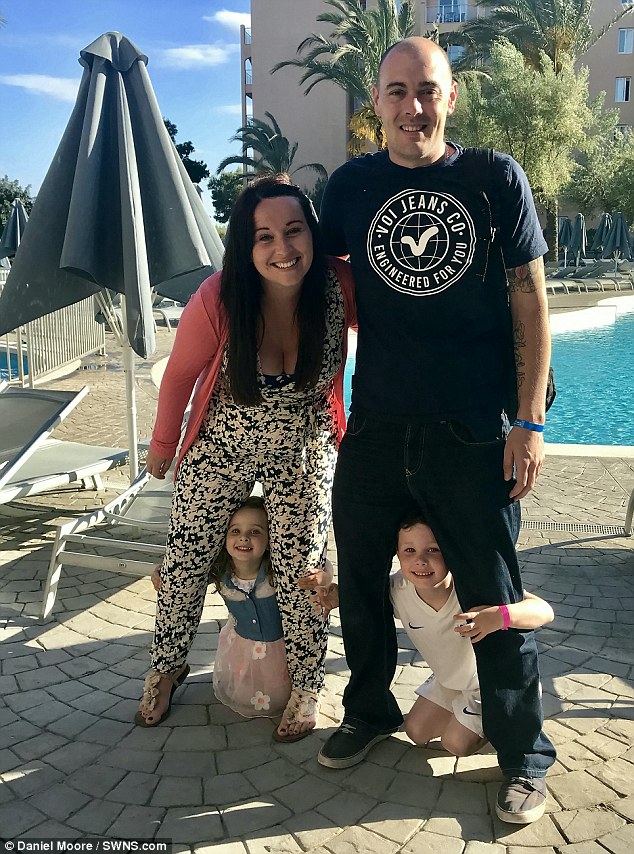 Mr Moore on their term-time holiday in Mallorca with wife Samantha and their children Alice and Charlie, which sparked the school truancy fine

Devon County Council apologised for the embarrassing error – blaming it on a new IT printing system – not its Head of Education Dawn Stabb.

Mr Moore, a baker, took his family on a week-long holiday to Mallorca, Spain in May, and received the fine letter from Devon County Council on Tuesday. 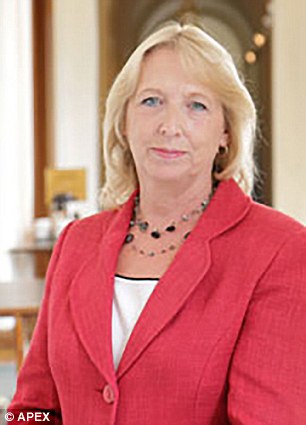 He said: ‘Today we received our fines for taking Charlie on holiday.

‘I’m not going to pretend I’m a spelling guru or a typing expert. But I’m also not the head of education in Devon.

‘This woman’s in charge of the future generation’s education, our children’s education and she’s rubber stamping this tripe.

‘I’m going to pay the fine, no questions asked but I shall also be sending her letter back marked and graded.’

He added: ‘Maybe I’ll throw a little holiday snap in as well.

‘I saw a couple of spelling errors as soon as I opened the letter but as I read on more mistakes appeared.

‘At first I thought it was quite funny but when you place it into the context that these people are responsible for the future of children’s education it is concerning.’

A Devon County Council spokesman said: ‘We have been trialling a new IT printing system and a number of mistakes were unfortunately not picked up before this letter was despatched.

‘It is an embarrassing error and we have taken steps to ensure it won’t be repeated.’

‘The parent is guitly of an offence’: That error-strewn letter in full 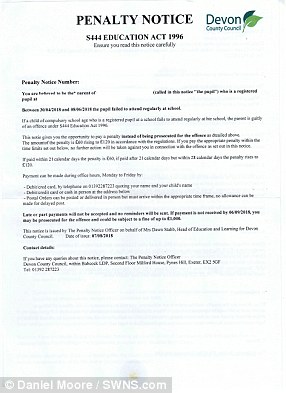 If a child of compulsory school age who is a registered pupil at a school fails to attend regularly at hte (sic) school, the parent is guitly (sic) of an offence under S444 Education Act 1996.

This notie (sic) gives you the opportunity to pay a penalty instead of being prosecuted for the offence as dteailed (sic) above.

The amountot (sic) the penalty is £60 rising to £120 in accordance with the regulations.

If you pay the appropriate penalty within the time limits set out below, no further action will be taken against you in connection with the offence as set out in this notice.

Payment can be made during office hours, Monday to Friday by:

*Postal Orders can be posted or delivered in person but must arrive within the appropriate time frame, no allowances can be made for delayed post.

Late or part payments will not be accepted and no reminders will be sent. If payment is not received by 06/09/2018, you may be prosecuted for the offence and could be subject to a fine of up to £1,000.

This notice is issued by The Penalty Notice Officer on behalf of Mrs Dawn Stabb, Head of Education and Learning for Devon County Council.