A ‘five-a-day soup’ sold by UK retailers such as Asda and Waitrose has been pulled from shelves over fears it could contain listeria.

The Foods Standards Agency (FSA) has said that three of the Soupologie soups could contain listeria monocytogenes.

If ingested those affected by the bacteria can develop symptoms such as sickness and diarrhoea, chills, muscle ache and symptoms similar to that of flu.

But in high-risk individuals, it can spread, leading to life-threatening complications including sepsis. 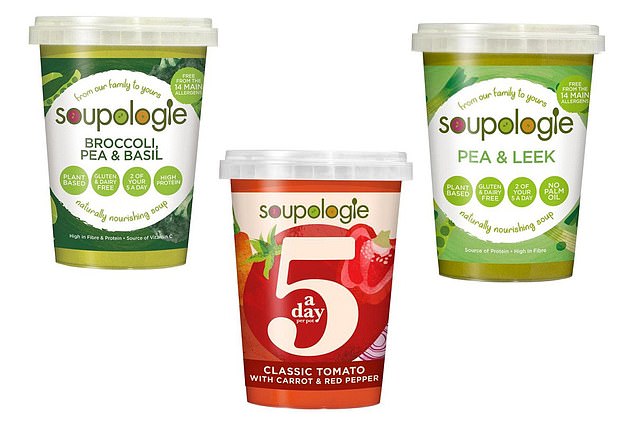 The three soups which have been recalled by the Food Standard’s Agency include Broccoli Pea and Basil (left), Classic Tomato with carrot and red pepper (centre) and Pea and Leek (right)

The products which have been recalled are all 600g products and include the classic tomato soup with carrot and red pepper (batch code 03969, best before 1 October 2019), which is the five-a-day soup.

No other Soupologie products are thought to have been affected and the FSA had advised consumers to not eat the products and instead return them with a receipt.

In a statement on the FSA website it said: ‘Some people are more vulnerable to listeria infections, including those over 65 years of age, pregnant women and their unborn babies, babies less than one month old and people with weakened immune systems.’

The outbreak had started in April and was revealed in August.

On June 17, Western Sussex Hospitals NHS Foundation Trust confirmed that two patients – one at St Richard’s and one at Worthing Hospital – had been infected by listeria linked to pre-packed chicken sandwiches.

The FSA withdraws products or recalls them if they believe there to be an issue with the items.

WHAT IT IS, THE RISKS, AND HOW TO AVOID IT

WHO IS SUSCEPTIBLE … AND THE SYMPTOMS

HOW TO AVOID IT