Paris: The French parliament has started debating President Emmanuel Macron's divisive plan to overhaul the pensions system, a process that is expected to take several months.

Changing and streamlining the retirement system is a priority for Macron and has been met with anger in recent months from unions, triggering street protests and France's longest transport strike in decades.

The final vote, after the legislative process through the National Assembly and the Senate, is not expected before the northern summer. 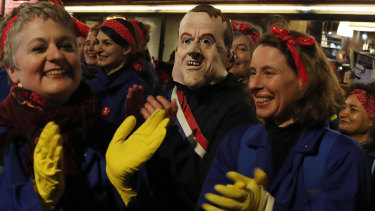 Women sing against French President Emmanuel Macron at a gathering protest during the opening debate on the French government’s pensions reform bill .Credit:AP

Further protests have been called for Thursday, but, in a sign of the relative weakening of the unions, a call for a metro strike on Monday was largely ignored.

Opposition lawmakers are hoping to counter the government's plans, proposing a record 41,000 amendments. But Macron's party has a majority in parliament.

Veran was appointed minister on Monday after his predecessor, Agnes Buzyn, was named a Paris mayoral candidate. The original mayoral contender from Macron's party quit amid a sex video scandal.

Several hundred protesters marched in the Paris streets on Monday, heading toward the National Assembly amid a high police presence.

Amid them, David Lepennetier, a rail worker from the city of Rouen, in western France, denounced the bill's goal as being "to impoverish all of us and push us – those who can – toward private pension funds. We saw after what happened in the United States in 2008 that pension funds can only impoverish the pensioners."

Lawyer Cecile Hakim-Bonnerot, also protesting, said "we, lawyers, we have to pay twice as much as we do now with this law but the minimum living wage once we are retired and if this law passes will be almost €500 less a month. You can't pay more to have less."

Polls show a majority of the French public are in favour of the strikes and are critical of the government's handling of the reform.

The changes aim to streamline France's complex pensions system, which some parts of the workforce fear will result in lower pensions.

They would end some specific pension schemes under which certain people, like railway workers, are allowed to take early retirement. Others, like lawyers and doctors, would pay less tax.

Macron's government had wanted to raise the age for full retirement by two years to 64 but eased off the move after the strikes, which began early December and ran six weeks.