‘The truth isn’t the truth’: Giuliani bizarrely explains why Trump should NOT testify in collusion probe for fear of being lured into a perjury trap

Rudy Giuliani is claiming the ‘truth isn’t the truth’ when asked about President Donald Trump sitting down with the special counsel as part of the investigation intoRussia’s role in the 2016 election.

The former New York City mayor, who’s serving on Trump’s personal legal team, made the comment in an interview on Sunday.

‘I am not going to be rushed into having him testify so that he gets trapped into perjury,’ Giuliani said on NBC’s ‘Meet the Press’ when asked if Trump would sit down with special counsel Robert Mueller. ‘It’s somebody’s version of the truth. Not the truth.’ 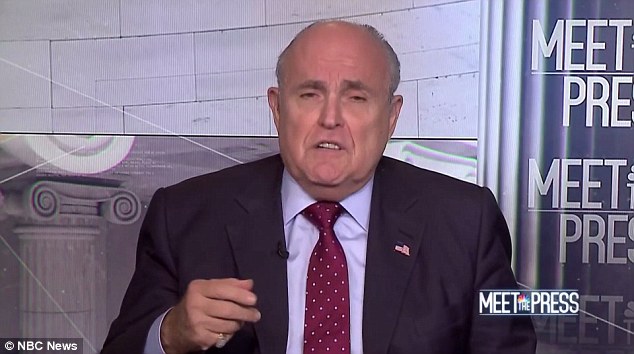 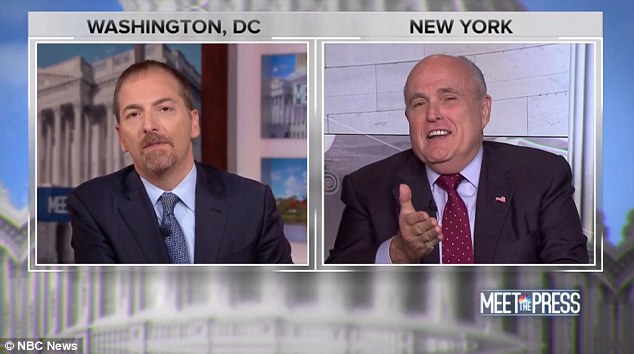 The former New York City mayor went on to clarify he meant ‘truth isn’t truth’ when two witnesses give conflicting reports in an investigation.

He cited former FBI director James Comey’s claim that Trump talked to him about his former National Security Adviser Michael Flynn, who was being investigated as part of the Russia probe.

Originally the president’s team said Trump did not ask Comey to drop its look at Flynn and the Russia investigation when the two men met in February 2017. But Giuliani said last week the two men did not discuss Flynn at all.

Comey, who was then FBI director, claims Trump said to him: ‘I hope you can see your way clear to letting this go, to letting Flynn go.’

But Giuliani said on CNN last week: ‘There was no conversation about Michael Flynn.’

Flynn, who was Trump’s first national security adviser, pled guilty in December to lying to the FBI about conversations he had with the Russian ambassador and is cooperating with Mueller’s investigation. He resigned from the White House after 24 days when it was revealed he lied to Vice President Mike Pence about conversations he had with Sergey Kislyak after the election.

But Giuliani seemed to realize his ‘truth isn’t truth’ statement could be misinterpreted, telling Todd ‘Don’t do this to me,’ when the ‘Meet the Press’ host groaned, put his head in his hands, and pushed him on the issue.

Todd laughed, put his head in his hands and shook his head back and forth when Giuliani made his statement and said: ‘Truth isn’t truth? Mr. Mayor do you realize, this is going to become a bad meme.’

Giuliani responded to his gesture with: ‘Don’t do this to me.’

‘Don’t do truth isn’t truth to me,’ Todd shot back.

Giuliani then went on to clarify: ‘Donald Trump says I didn’t talk about Flynn with Comey. Comey says you did talk about it. So tell me what the truth is. If you’re such a genius.’

The former mayor went on: ‘So we have two pieces of evidence: Trump says he didn’t tell him. The other guy says that he did say it. So which is the truth?’

Todd conceded Giuliani had a point.

‘Alright on that point you’re right, on two people,’ he said. 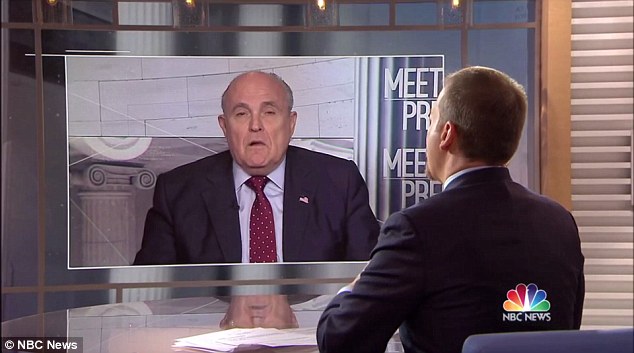 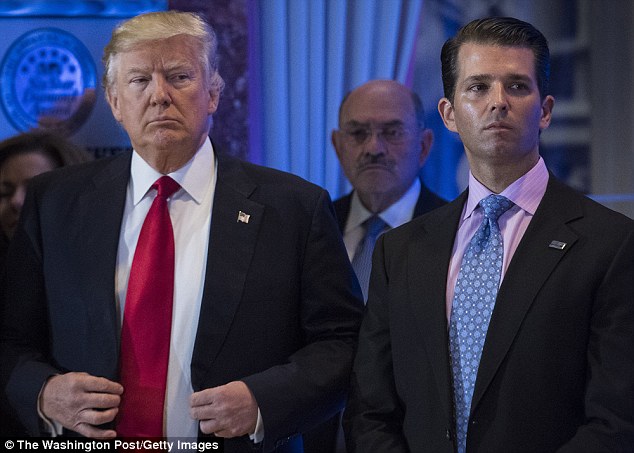 Negotiations have been ongoing between Trump’s legal team and the special counsel’s team on whether the president will sit down with them.

Giuliani was also asked about the infamous June 2016 Trump Tower meeting, where Donald Trump Jr., Trump’s son-in-law Jared Kushner and then-campaign manager Paul Manafort meet with a Russian lawyer who had ties to the Kremlin.

He doubled down on Trump’s assertion the meeting – which took place during the heart of the presidential campaign – was to get information on Hillary Clinton.

‘Because the meeting was originally for the purpose of getting information about Clinton’ he said.

‘That was the original intention of the meeting. It turned out to be a meeting about another subject and it was not pursued at all,’ he added. ‘And, of course, any meeting with regards to getting information on your opponent is something any candidate’s staff would take. If someone said, I have information about your opponent, you would take that meeting.’

He also said the Trump campaign team didn’t know they were meeting with a Russian and that the attorney, Natalia Veselnitskaya, did not represent the Kremlin.

‘She didn’t represent the Russian government. She was a private citizen. I don’t even know if they knew she was Russian at the time. All they had were her name,’ Giuliani said. ‘They knew it when they met with her. Not when they set up the meeting.’

He added: ‘All they knew was a woman with a Russian name wanted to meet with them.’

The emails were sent to Trump Jr via Rob Goldstone, a music publicist who represented Emin Agalarov, whose father, Aras Agalarov, is a major real estate developer close to Putin and who bought rights to the 2013 Miss Universe pageant that took place in Moscow and which Trump attended.

One of the messages notes the meeting is with a ‘Russian government attorney who is flying over from Moscow.’

Explanations for the Trump Tower meeting, which has become a focal point of Mueller’s investigation into Russia’s role in the 2016 election, have varied and a tweet from the president in early August added yet another one when he wrote the meeting was about Clinton.

But the original statement from Donald Trump Jr about the meeting – which President Trump helped craft – said it was about Russian adoptions.

Donald Trump Jr. gave the New York Times a statement in July 2017, when the paper broke the story, that said the gathering was about an adoption program. His statement did not address whether the presidential campaign was discussed.

The Russian lawyer at the meeting, Natalia Veselnitskaya, has led a multipronged attack against the Magnitsky Act, an American law that blacklists suspected Russian human rights abusers and championed by financier Bill Browder, who Russian President Vladimir Putin named during the Helsinki press conference as someone Russians want to speak to in exchange for letting Mueller talk to Russian nationals.

The Magnitsky Act so enraged Putin he retaliated by halting American adoptions of Russian children.