It was a bitter, close election, and there were furious allegations of fraud.

After Democrat John Kennedy narrowly defeated Republican Richard M. Nixon in the 1960 US presidential election, a coalition of opponents plotted to deny him the presidency in the Electoral College.

Most of the plotters were white, conservative electors from the South who opposed the young Massachusetts senator's liberal policies, especially his support for civil rights for black Americans. 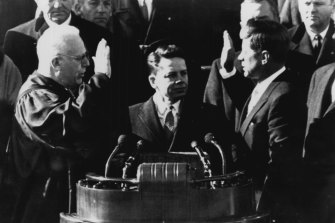 John F. Kennedy (right) is sworn in as the 35th President of the United States on January 25, 1961.Credit:UPI

If these electors had succeeded, segregationist Democratic Senator Harry Byrd of Virginia would have been elected president. His vice-president would have been Republican Senator Barry Goldwater of Arizona. Neither man had nothing to do with the idea.

On Monday, the electoral college will meet to ratify the victory of Democrat Joe Biden over President Donald Trump, who has refused to concede. Some Trump backers are pressing states to release electors pledged for Biden. At least 33 states prohibit such "faithless" electors and most other states void switched votes.

The 1960 presidential election set off a political storm, much like this year's contest. Kennedy wound up winning by only about 113,000 votes out of 69 million cast. 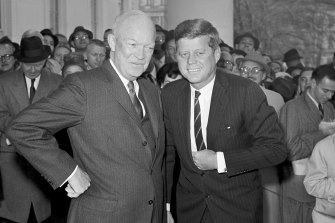 Republicans suspected voter fraud in 11 states and filed suits in two of them, Texas and Illinois, which Kennedy won by fewer than 9000 votes. The suit in Illinois charged that the Democratic stronghold of Cook County had dug up Kennedy voters from the cemeteries of Chicago.

Judges threw out both suits and the action moved to the Electoral College. Nixon took no part in the vote challenges and told a reporter that "our country cannot afford the agony of a constitutional crisis."

Immediately after the 1960 election, electors from Alabama and Mississippi agreed not to cast their votes for Kennedy, who had won both states. All of Mississippi's eight electors and six of Alabama's 11 electors were unpledged. The electors lobbied their counterparts in the electoral college to follow their lead. 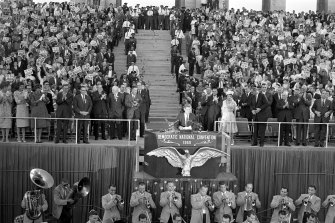 July 15, 1960: Senator John F. Kennedy gets a standing ovation as he steps up to accept the Democratic Party’s nomination for president during a Los Angeles Coliseum rally.Credit:AP

Organisers of the movement came up with the three-point "Plan To Give the South a Partial Vote in the Affairs of the Nation."

Plan A was for electors from 11 Southern states to use their clout to persuade Kennedy to stop US aid to communist countries and to support "states' rights" – a code for resisting racial integration.

If Kennedy refused, the electors would move to Plan B: a resolution calling for "reversing the position of candidates" in the election. That is, Vice President-elect Lyndon Johnson of Texas would be president and Kennedy would be vice-president.

Finally, there was Plan C: Republican electors from all 50 states would be invited to meet in Chicago to pick a president from a list of "outstanding Southern men." Among the choices were Byrd, segregationist governors Orval Faubus of Arkansas and Ross Barnett of Mississippi, and Georgia Senator Richard Russell.

The goal was to have electors elect the president within the electoral college, said Lea Harris, a Democratic lawyer in Alabama. If that failed, the electors would seek to switch enough votes to keep Kennedy from getting the 269 electoral votes needed for election and throw the race into the House of Representatives.

This had happened twice before in US history. In 1800, the House picked Thomas Jefferson as president over Aaron Burr when the Electoral College vote ended in a tie. In 1825, the House chose John Quincy Adams over Andrew Jackson, who had won the popular vote.

Over the years, there have been only about 165 "faithless" electors. The US Supreme Court recently upheld the rights of states to reject the votes of such electors.

The rebel Southern electors wrote to Republican electors urging them to switch their votes from Nixon. Republican Henry Irwin of Oklahoma, a pledged Nixon elector opposed to what he called Kennedy's "socialist-labour" views, was receptive. It soon "became apparent to a shrewd observer that a possibility existed to deny the presidency to Kennedy," he said later.

Irwin sent telegrams to 218 Republican electors urging them to switch from Nixon to Byrd. He also wrote all the GOP state chairmen. He got about 40 replies, but no commitments. "Feel obligated to Nixon," one Kansas elector responded.

The rebellion spread in the South. Mississippi Governor Barnett wrote to electors in Southern states urging them to cast their votes for Byrd and Goldwater. In Alabama, the Mobile Press declared in an editorial that "Southerners deeply concerned over racial mixing should lift their voices in an appeal to all their presidential electors."

Efforts to release electors to vote for whomever they wished sprung up in Texas, Louisiana, Georgia, Virginia and South Carolina. "This had been a real threat," JFK biographer Theodore Sorensen wrote later.

Two weeks before the Electoral College vote, organiser Harris predicted that Kennedy wouldn't receive enough votes to be elected. The White Citizens Council newspaper in Mississippi assured its readers that a Southerner would win the presidency.

The rebel yells of revolt ended in a whimper, however. No part of the Southern "plan" was ever carried out. Most electors felt morally obligated to cast their votes based on their state's election results.

One South Carolina elector for Kennedy said he ignored numerous "crackpot" requests to change his vote, including an offer from the "Flying Tigers Rights Party" to give him stock in a company in the Philippines.

Kennedy won 303 Electoral College votes to Nixon's 219. Byrd got only 15 votes, one from Oklahoma's Irwin and 14 from the Alabama and Mississippi electors. All 14 electors voted for South Carolina Democratic Senator Strom Thurmond for vice-president. 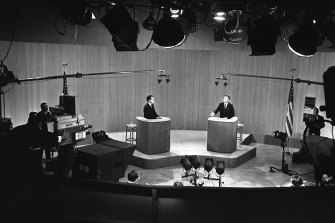 A bitter and close contest: Vice-President Richard Nixon (left) and Senator John F. Kennedy in their fourth and final presidential debate in New York in 1960.Credit:AP

After the overwhelming defeat, the Alabama electors complained that Southerners could have controlled the election, but "their sycophantic political leaders failed them miserably."

Ironically, as Vice-President to Eisenhower, it fell to Nixon to announce the Electoral College vote and his own defeat in early January in the House chamber. After starting alphabetically with the first votes from Alabama for Byrd, Nixon dryly remarked, "The gentleman from Virginia is now in the lead."

Later that year, the Senate conducted hearings into proposals to revamp the Electoral College. The system needed to be "brought out of the horse and buggy era and into the jet age," said Senator Mike Mansfield, of Montana.

Sixty years later, the horse and buggy version is still up and running.

US power and politics

Understand the election result and its aftermath with expert analysis from US correspondent Matthew Knott. Sign up here.