THIS is the heartbreaking moment a mother dolphin refused to let her dead calf go and desperately pushed its body through the ocean.

The tragic footage shows the grieving dolphin clutching onto the lifeless body of her dead baby in the sea near China. 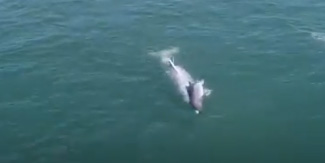 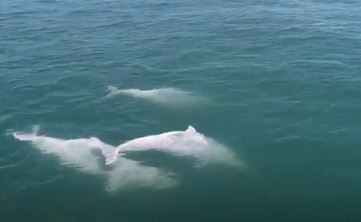 The heartwrenching video shows the mum balancing the carcass of the calf on her head while she swims, or using her nose to push it along.

When the calf’s body slips beneath the surface, she dives down to rescue it without hesitation.

A pod of dolphins are seen swimming close to the devastated mum.

The Chinese white dolphin could carry the calf's body for days, a researcher for animal rights group PETA Asia said.

The clip was shared by CGTN, with the caption: "Heartbreaking video: Mother dolphin refuses to let dead calf go."

Li Min, a dolphin expert who took the video, said the act of carrying the calf through the water was a mourning ritual.

Li said the calf's cause of death remains unknown without an autopsy.

The poignant sight has reignited the debate that humans may not be the only mammals capable of grief.

This is not the first time dolphins have been spotted appearing to grieve for their dead young.

Heartbreaking footage shows a mother dolphin carrying the body of her dead calf through the waterway in Indian Shores, Florida.

And in 2019, a dolphin was photographed carrying her dead baby after getting tangled in a crab net off the coast of Australia.

The image of Moon the dolphin was shared by a wildlife organisation in Perth.

In 2018, a study found that whales and dolphins have trouble letting go of their loved ones and hold “vigils” for the deceased.

Researchers from Dolphin Biology and Conservation at Oceancare in Cordenons, Italy, found the creatures mourn the death of their friends and family in a similar way to humans.

The study analysed 78 records of aquatic mammals' treatment of their dead between 1970 and 2016.

More than 90 per cent of the dolphins studied were attentive to their dead, with grieving females making up three quarters of these interactions.

Some 75 per cent of the incidents were of adult females looking after their dead calf, with some of them carrying decomposing bodies for up to a week. 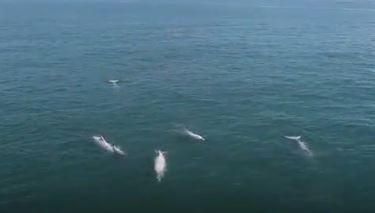