EXCLUSIVE: Homeless man paid £90 by British stag party to have groom’s name tattooed on his FOREHEAD in Benidorm is finally getting it removed after FOUR YEARS of humilation

A homeless man who was paid by a stag party in Benidorm to have the groom’s name tattooed on his forehead is finally on his way to having it removed.

Every two months for the past year, Tomek Matuszewki, 39, from Poland, has undergone an excruciating four-minute procedure to have the Brit’s name removed.

Now the majority of the tattoo has been erased, although he still has three final sessions to endure, as forehead skin is too thin to have it removed all at once.

‘It’s the worst pain ever in my life,’ Mr Matuszewki said. 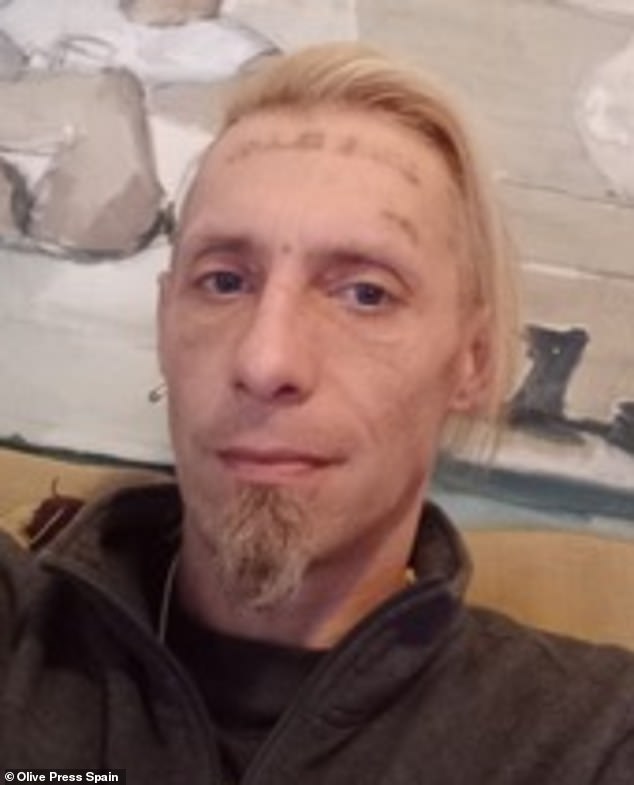 Tomek Matuszewki, 39, was paid by a stag party in Benidorm to have the groom’s name, ‘Jamie Blake’ tattooed on his forehead

‘It is like a really hot iron pressing into your forehead every second – a tooth abscess is nothing compared to this.’

In 2018, the trained chef had been living on the streets of the well-known tourist resort when the gang of bleary Brits-on-the-booze offered him €100 to get the tattoo.

Desperate and starving – having walked to Spain after a painful split from a fiancée at home in Poland – he willingly accepted.

But it was only the following morning when he woke up with the name ‘Jamie Blake’ on his forehead that the full realisation of the degrading humiliation dawned on him. 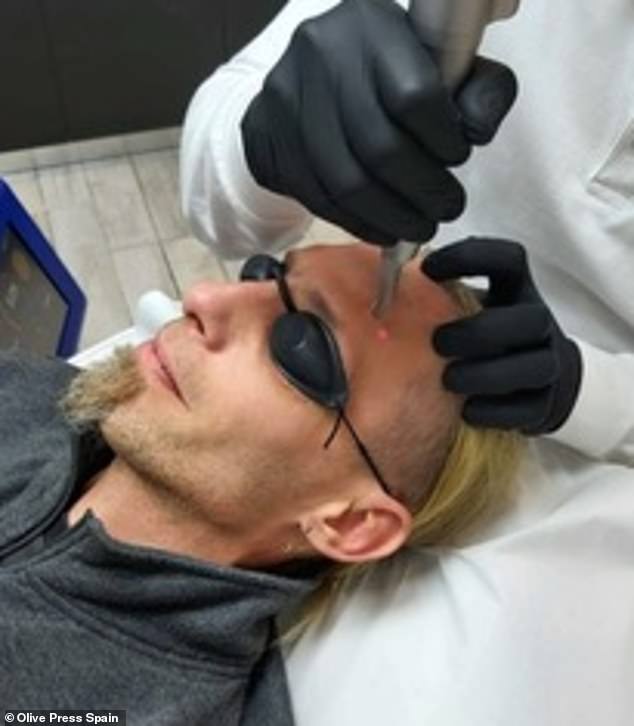 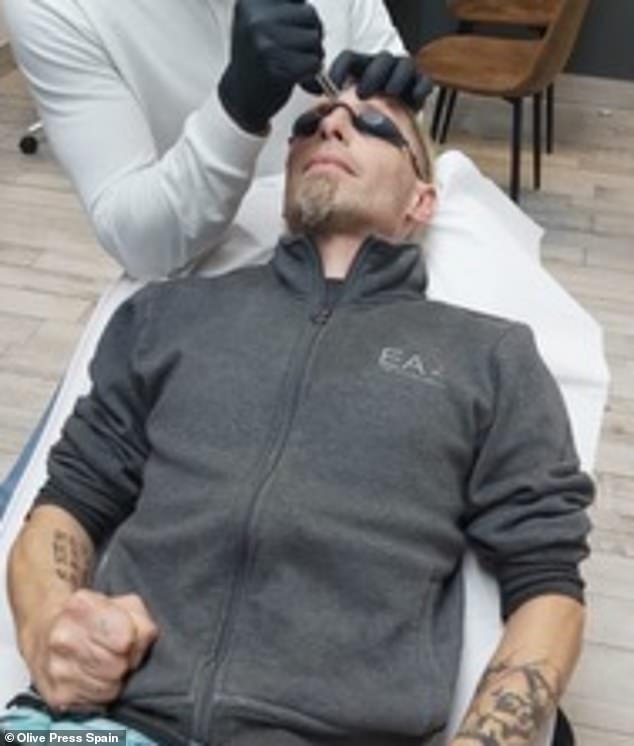 The intent was for Mr Matuszewki to also have ‘North Shields, NE28’ – Blake’s home address – inked on his forehead but he could not bear the agonising pain after the first two letters and they had to stop.

‘It was terrible afterwards – I felt everyone looking at me. I had to go everywhere in a hat. I was even getting calls from friends in Poland who had read about it in the news,’ he said.

While most people were sympathetic towards his plight, for others it was a sign that they could treat him as ‘less valuable because I lived on the street’.

News of the cruel stunt prompted an uproar at the time, both in Spain and abroad, with the Benidorm British Business Association branding it ‘utterly inhuman and akin to abuse.’

Mr Matuszewki called for the stag member, who he claims paid him to have the inking, and the tattoo artist to be jailed.

But he has revealed that he has received ‘zero apology’ or even communication from Blake or any of those responsible.

‘Would you do that to your own worst enemy?’ Mr Matuszewki asked.

He now wants Blake, who had moved from Tyneside to Benidorm three months before and worked on the strip, to apologise publicly and foot the bill for the tattoo removal, which has come to approximately €1,500 so far. 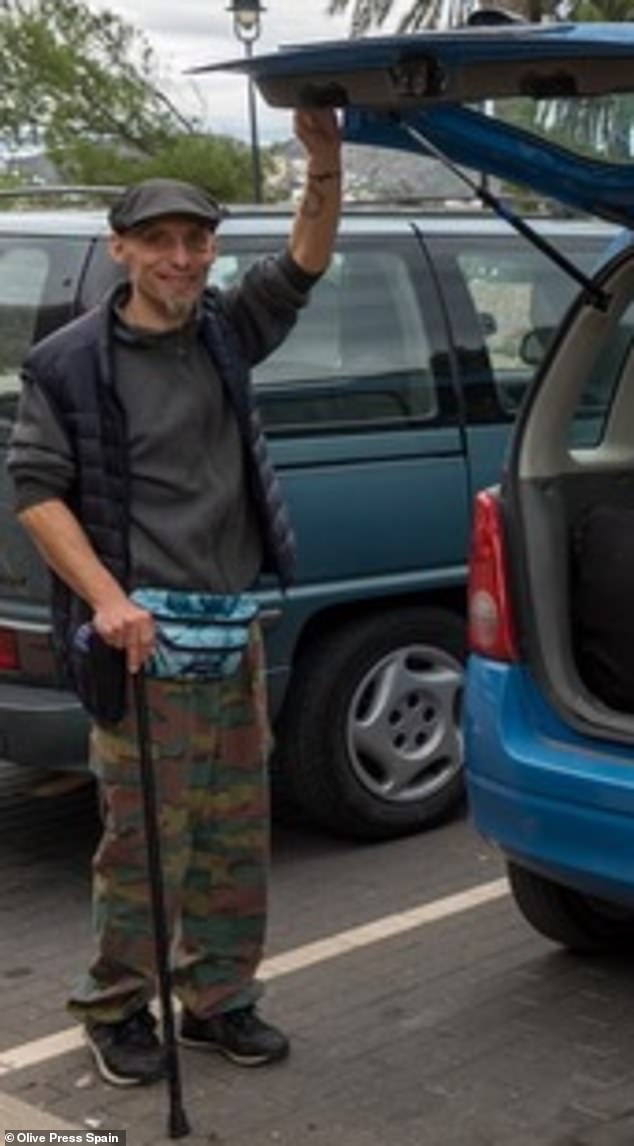 Mr Matuszewki, who walked from Poland to Spain after breaking up with his fiancée, was recently diagnosed with osteonecrosis in both hips, in which the bone has died

Mr Matuszewki also dismissed Blake’s cowardly claims to the Evening Chronicle that he wasn’t a real victim and wasn’t paid as ‘total lies’.

He claimed Mr Matuszewki ‘isn’t homeless, he lives with my friend and works on the strip. I got drunk and was asked to leave the bar. I was never in the tattoo parlour and as far as I know he was not paid any money.’

But since the sickening event, Mr Matuszewki’s life has taken a turn for the better, which includes having periodic sessions to gradually remove the tattoo, funded and supported by the homeless charity Project4all.

Thanks to the non-profit’s help, Mr Matuszewki has got off the streets, conquered his drinking problem and is now working shifts with them.

He helps to deliver food, clothing and support to roughsleepers on the 130km ‘food-run’ along the Costa Blanca, including Javea, Calpe, Altea, Albir and Benidorm.

‘I’ve got my own room, and every day I’m trying to help people on the streets, with food, clothes, a bit of chat and a smile with them, to let them know they’re not alone,’ he explained.

Despite the upturn in his life, Mr Matuszewki was recently diagnosed with osteonecrosis in both hips, in which the bone has died.

His case was so severe that the doctor who diagnosed him was astonished that he had been able to walk to the clinic with just the aid of a walking stick.

It may have been brought on by the incredible way in which he found himself in Spain, after walking the entire way from Poland over the space of a year to escape a bad break-up with his fiancée of the time.

Due to the condition, he is unable to work in his profession as a chef so he finds himself without any form of healthcare to cover such a serious condition.

Holland-based Project4all has been raising funds to finance the two operations to replace each hip bone for Mr Matuszewki, with a target of €18,000 to have the operations done privately.

As part of this, they are organising a 100km walk in 24 hours fundraiser on 4 February which they have dubbed El Paseo de las Caderas – The Walk of the Hips, involving 20 laps of 5km around Benissa.

To help Tomek Matuszewki properly get back on his feet, you can donate to his Gofundme page here.