This year has been dominated by Russian dictator Vladimir Putin’s illegal invasion of Ukraine – but despite 10 months of fighting there is no sign of an end to the war.

With the onset of winter, the battle has become a stalemate. The ground has turned to mud, making movement difficult. The trench lines of the two sides have barely shifted in three months. The scenes from the combat zones look like the Western Front in 1915. 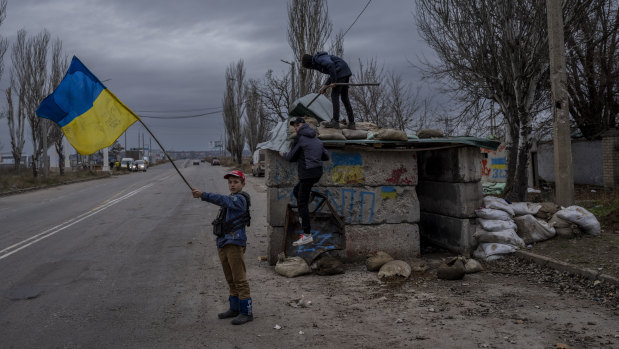 There is no sign that Russia is about to collapse and withdraw of its own accord. Putin is still firmly in charge in the Kremlin thanks to systematic repression of all domestic opponents. The Russian economy contracted about 5 per cent this year under the impact of Western sanctions, but this has not yet been enough to cripple its ability to make war.

In these circumstances, some respected commentators, including former US secretary of state Henry Kissinger in a recent article in the British Spectator, are calling for negotiations to end the bloodshed.

They argue the current situation represents a win for Ukraine. It has bloodied Putin’s nose and shown that Ukraine has a serious army that can defend its independence.

They argue Ukraine is now closely linked to NATO and the European Union, which have shown they will never allow Ukraine to fight Putin alone.

Kissinger and others have suggested that a peace process could force Russia to formally accept Ukraine’s independence, avoiding the need for more bloodshed.

The talks could leave the intractable issue of the disputed territories of Crimea and Donbas to be decided on the principle of self-determination by internationally supervised referendums.

This might sound attractive, but there are many reasons why it is still far too soon to start talks.

A ceasefire along the current front line would leave Putin in control of conquered territory in Ukraine. This would be a fundamental breach of the United Nations Charter and would set a bad precedent for other potential aggressors.

Talking to Putin is useless in any case because he cannot be trusted. He has talked recently about being open to negotiating, but this is a sign of desperation rather than a serious offer of an olive branch.

While Putin talks about negotiating, he showed his real agenda this week with the Russian airstrikes that killed 10 people in the southern city of Kherson.

Most importantly, a decisive victory for Ukraine is still very possible. The mud will eventually dry out or freeze, and the campaigning season will restart.

Providing they have the weapons, Ukrainians, incredibly, still seem to be as determined as ever to drive Russian troops from their soil. They have shown they are more motivated to fight than the raw conscripts and paid mercenaries, including freed convicts, on whom Putin increasingly relies.

Putin’s last hope was that he could blackmail or bribe the West into abandoning Ukraine. But he seems to have failed.

Putin was counting on isolationist US Republicans to stop the flow of arms to Ukraine, but after Ukrainian president Volodymyr Zelensky flew to Washington last week, the US Congress overwhelmingly approved an additional $US45 billion ($67billion) in military aid to Ukraine. The US also finally agreed to supply Patriot anti-aircraft missiles, which Ukraine has been demanding since the start of the war.

The war has dragged on far too long and Ukraine is suffering, but Australia must stand with its allies and continue our support until Putin caves in.

Michael Bachelard sends a newsletter to subscribers each week. Sign up to receive his Note from the Editor.