One person was injured after the Bell TH-67 careered off the platform at a police training facility in Little Rock with its rotors turning.

The helicopter and the platform start to move as the helicopter pitches and fails to gain altitude after getting caught in a gust of wind.

The rotors spun, as the Little Rock Police Department pilot begins what looks like will be a usual take-off on Thursday of last week

The helicopter begins to lift off the platform, however police say a straight wind had pushed it up and off

A man comes out of a building, seeming to signal for the pilot to land, as the aircraft’s skid catches the edge of the platform and the craft rolls.

The chopper begins to lean towards the ground, before the rotors smash into it and the entire aircraft flips and crashes.

The helicopter’s rotor can be seen touching the ground before breaking apart.

Retired officer William ‘Bill’ Denino, who was hired in 2012 as a civilian pilot for the helicopter was injured in the crash. Another person on board was uninjured.

Denino was listed in stable condition after the incident last week.

Police had said a straight-line wind forced the chopper off the platform.

In seconds, the wind shoves the helicopter and the skid catches on the platform 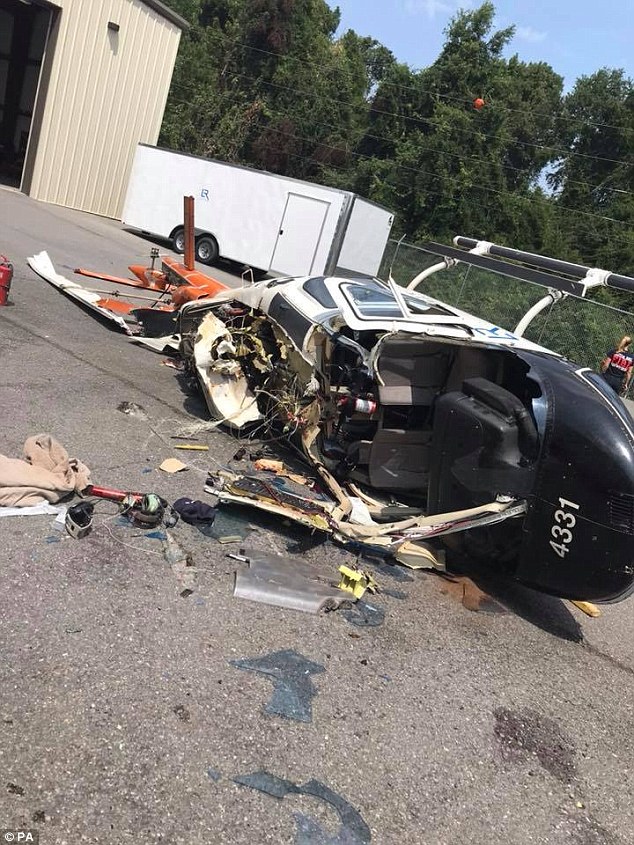 Terrifying. Thankfully there were no fatalities – despite the look of the helicopter wreckage