London: While the 17th century is widely regarded as the golden age in Dutch history, where it accumulated great wealth from trade and helped fund the likes of artists Rembrandt and Johannes Vermeer, its darker side still casts a long shadow.

The evils which fuelled prosperity generated by seafaring traders, slavery and iron-fisted colonial rulers were brought into sharp focus amid global protests two years ago, sparked by the killing of George Floyd. 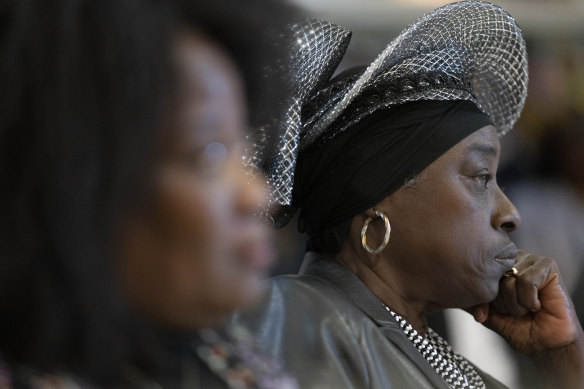 An advisory panel assembled by the Dutch government later urged it to acknowledge that the century transatlantic slave trade amounted to crimes against humanity and to apologise for the Dutch role.

On Monday, the nation’s prime minister, Mark Rutte did just that.

“For centuries under Dutch state authority, human dignity was violated in the most horrific way possible,” he said in a 20-minute speech at the country’s National Archives in The Hague.

“It is true that nobody alive today bears any personal guilt for slavery… (however) the Dutch state bears responsibility for the immense suffering that has been done to those that were enslaved and their descendants.”

The Dutch empire of the 16th and 17th centuries became one of the world’s most dominant colonial powers, with outposts in five continents: Asia, Africa, North America, and South America. Historians estimate Dutch traders shipped more than 600,000 enslaved Africans to the Americas, mostly to Brazil and the Caribbean.

Enslaved people were violently forced to work under harsh and dehumanising conditions on plantations. And for more than 250 years in its colonies in the regions now known as Indonesia, South Africa, Curaçao, New Guinea – and beyond – enslaved men, women and children were subjected to extreme physical, mental and sexual violence.

Rutte promised the government would establish a 200 million euro fund for initiatives that would help tackle the legacy of slavery in the Netherlands, as well as a museum. The move marked somewhat of a back-down for the conservative Dutch prime minister, who had previously refused to deliver the apology, arguing that it could start a “polarising” debate in the Netherlands.

He said he’d experienced a personal “change in thinking” and said that he was wrong to have thought that the Netherlands’ role in slavery was “a thing of the past”. 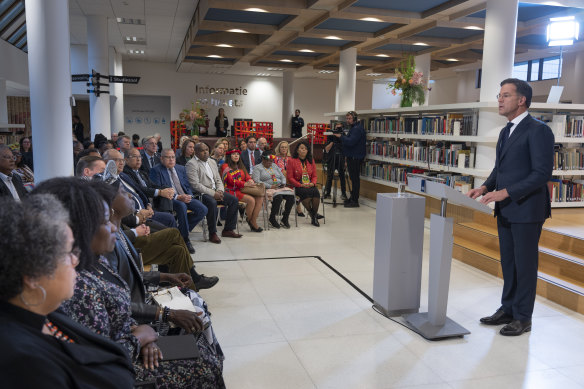 Dutch Prime Minister Mark Rutte made the apology at the National Archives in The Hague.Credit:AP

While the Dutch take pride in the country’s naval history and prowess as a trading nation, there has been growing calls for children to be taught more about the role in the slave trade played by the Dutch West India Company and the Dutch East India Company, key sources of national wealth.

But critics of Rutte have complained there was insufficient consultation on the apology and the way it had been “pushed through” by the Dutch cabinet had a “colonial feel” to it.

As the prime minister delivered the apology some of his ministers headed to Suriname, the only sovereign nation outside Europe where Dutch is spoken by a majority of the population, as well as to Caribbean islands that remain a part of the Netherlands, many with autonomy including Curacao, Sint Maarten, Aruba, Bonaire, Saba and Sint Eustatius.

“Let me be clear that we won’t accept an apology until our advisory committee has discussed it and we as a country discussed it,” she said.

Six Suriname foundations sought a court injunction to push the apology back to July 1 next year which would mark the 160th anniversary of slavery’s abolition, although it took another decade before slavery was actually phased out in the Dutch colonies

Roy Kaikusi Groenberg from the Honour and Recovery Foundation, a Dutch Afro-Surinamese organisation, said it felt wrong that those who were descendants of slaves had struggled for years to change the national discussion, and had not been sufficiently consulted.

“The way the government is handling this, it’s coming across as a neocolonial belch,” he said.
“This state of affairs is causing a lot of turmoil in Afro-Caribbean Dutch society.” 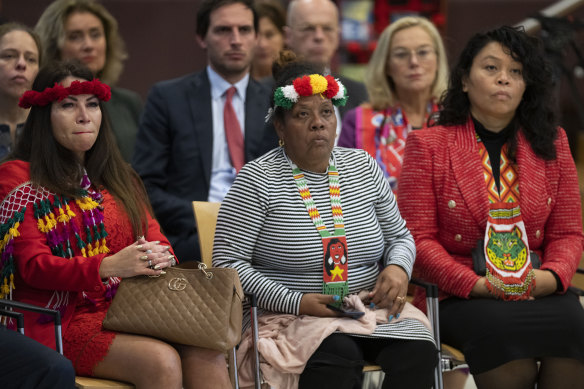 Invited guests listen to the apology by Mark Rutte.Credit:AP

But the Prime Minister of Aruba, Evelyn Wever-Croes, said the apology was welcome and a “turning point in history within the Kingdom”.

The Netherlands has been forced to address racism at varying levels in recent times, with a top civil servant at the Dutch foreign ministry apologising earlier this month after an independent investigation found there to be widespread racism in the government department.

The report said that racism at the ministry ranged “from aggressive, direct, overt and conscious to subtle, indirect, hidden, unintentional or unconscious — and that bicultural employees and locally hired employees of colour experience various forms of racism”.

In April, Dutch bank ABN Amro apologised for the similar involvement of its legal predecessors in the slave trade, plantation slavery and the trade in products that originated in slavery.

Earlier this month the Dutch King, Willem-Alexander, commissioned independent research into the role of the royal family in the colonial past of the Netherlands. He has previously apologised for “excessive violence” perpetrated by Dutch forces during the 1945-49 Indonesian war of independence, which caused 150,000 deaths and involved Dutch forces raping, torturing, and executing thousands of civilians.

Apologies for past wrongs in the slave trade remain rare but are growing. In 2018, Denmark apologised to Ghana, which it colonised from the mid-17th century to the mid-19th century.
In June, King Philippe of Belgium expressed “deepest regrets” for abuses in Congo.

In 2018, Prince Charles said Britain’s involvement in the transatlantic slave trade was an “appalling atrocity” that left an “indelible stain” on the world in a speech in Ghana.