Police searching for the bodies of missing campers Russell Hill and Carol Clay have found human remains in bushland near Dargo.

The remains are yet to be formally identified, a process police say could take some time.
Mr Hill and Ms Clay vanished while camping in the remote Wonnangatta Valley in March 2020. 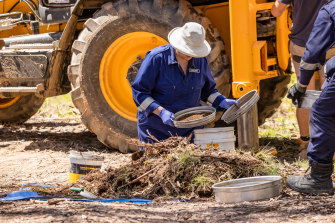 Specialist police were called into scour an area of the Grant Historic Area in East Gippsland, about 15 kilometres north of the Dargo township.

The 55-year-old father of three faced the Sale Magistrates Court via video link the following day from a regional police station nearby.

The murder charges followed three days of questioning by missing person squad detectives after specialist police were flown in via helicopter to arrest Mr Lynn at a remote Gippsland campsite about 5.30pm on Monday.