‘I’m a boy!’: Child, 4, born a female announces transition with a blue gender reveal cannon at Vancouver Pride Parade – with his grandmother by his side

A four-year-old child born a female officially announced his transition to being a boy with a blue gender reveal cannon at Vancouver’s Pride Parade – with his grandmother by his side.

Charlie Danger Lloyd, of British Columbia, Canada, was born female but now identifies as a male after expressing his desire to be a different gender from a young age, his mother Alaina Bourrel, 27, confirmed.

Video shared on social media shows the moment when Charlie, who uses he/him pronouns, pops a confetti canon with blue smoke coming out of it to celebrate his decision in July.

‘Once they closed the road, Charlie strutted out with Grammy and they faced the sidelines and after a short struggle, the cannon exploded with blue smoke and biodegradable confetti,’ the four-year-old’s mother, Alaina told the South West News Service.

‘Charlie jumped with joy as the crowd cheered him on. He couldn’t believe the love and support he was shown from the bystanders.’ Charlie ecstatically runs into his mother’s arms at the end of the video. 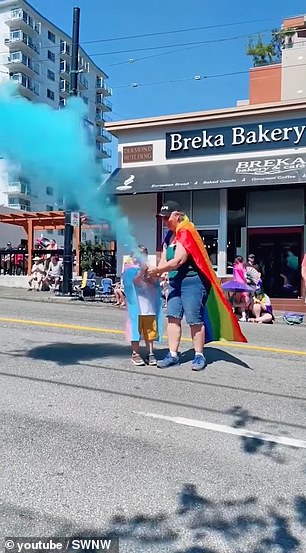 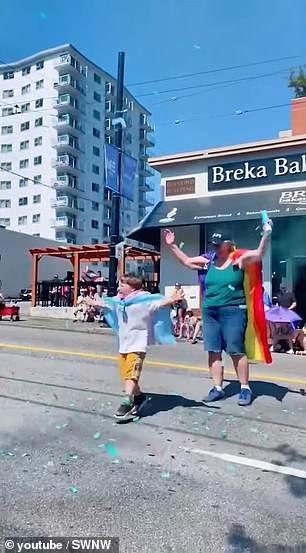 Charlie Danger Lloyd, four, has wanted to become a boy since the young age of two, according to his 27-year-old mother, as he celebrated his transition reveal at the Vancouver Pride Parade on July 31

Bourrel said the moment was inspired by the child’s previous gender reveal before his birth and how the smoke didn’t properly come out.

‘When we told him the story, he asked for a re-do with his granny at the Vancouver Pride Parade — so we bought him a smoke cannon and tucked it away for this day,’ she said.

The mother added that her child’s happiness comes a long way from a time when she was constantly trolled online by people, who accused her of being a ‘pedophile, groomer and rapist’ for supporting her son’s transition.

Bourrel further said Charlie grew envious of wanting to become a boy starting at the age of two, often telling family members that he wanted to look ‘just like daddy’. He would also try to convince people that he’s a boy on most days.

‘He wasn’t your typical little girl. He would play with other boys and the parents would say he was more of a boy than their own children,’ Bourrel said, looking back on her son’s early days. 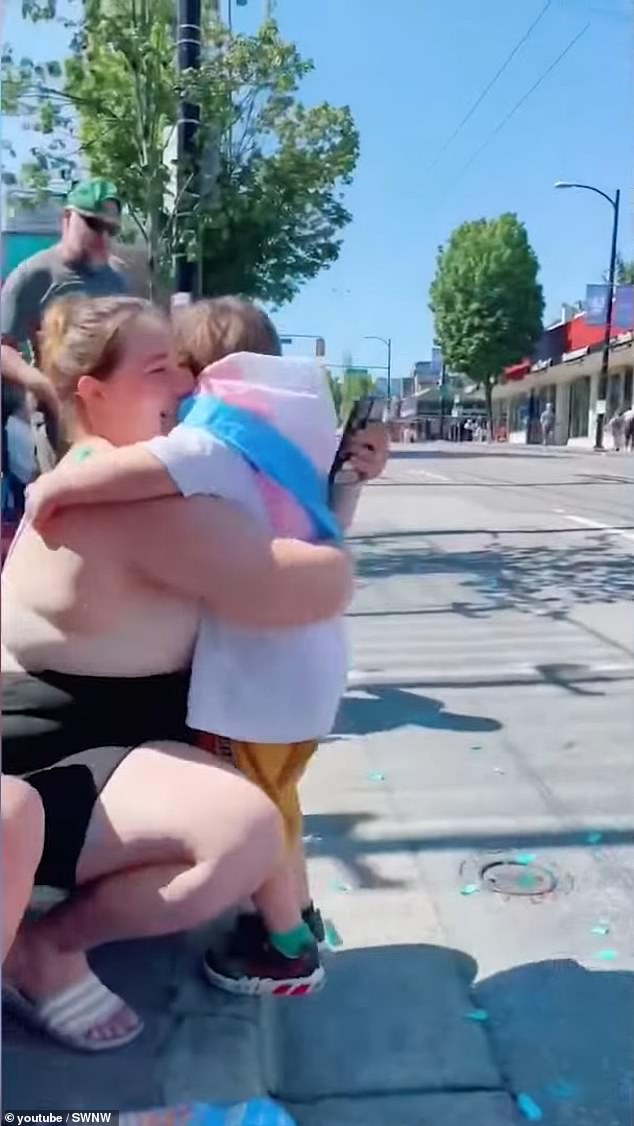 The preschooler has had no trouble at school with his transition and was congratulated by staff and peers when he decided to go by he/him pronouns. Pictured: Charlie in his mother’s arms at the Vancouver Pride Parade on July 31

She added that they didn’t seriously consider Charlie’s wishes until the end of 2021, when he no longer wanted to go shopping for girl’s clothing and wanted to cut his hair short.

‘He refused to shop in the girl’s section, but was too nervous to shop in the boys,’ Bourrel further revealed. ‘After lots of expressing his feelings and emotions with me, he decided that he wanted a new wardrobe so we set out to find our new style.’

After buying Charlie a new set of clothes for boys, the four-year-old wanted to figure out his hair style.

‘We made an appointment with Lia at Big Bros Barbershop, a trans-owned and operated salon in East Vancouver,’ Bourrel said. ‘After leaving the salon that afternoon, Charlie was a completely new child.’ 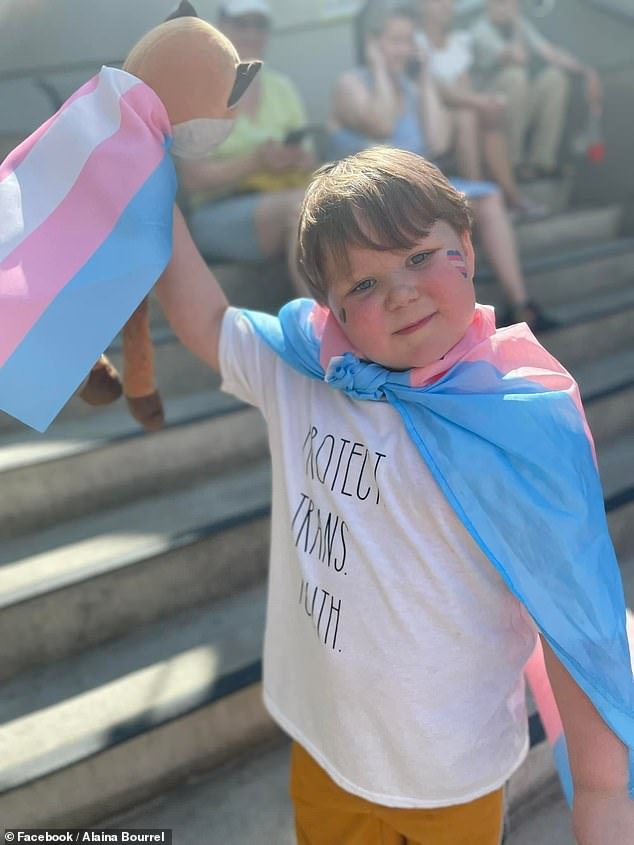 The four-year-old changed out his entire wardrobe with clothes for boys and cut his hair short. Charlie’s parents said that the child’s confidence has only gone upwards after he started his transition roughly four months ago

Charlie’s parents felt the benefits of these changes as their son’s confidence surged.

‘We are four months since he began his social transition now,’ she said. ‘He is still a normal kid that does completely normal little kid things like play with Lego[s], uses his creativity and learns to ride his bike.’

In spite of the hate Charlie’s parents receive, often criticizing their support and for ‘brainwashing’ their child, Bourrel said the family’s close entourage has been nothing but vocal of their support for the four-year-old.

‘His choices were not questioned and he was congratulated and everyone began using new pronouns,’ the young mother said.

‘We are so lucky to have the circle that we do,’ she added, expressing her gratitude towards the family’s inner circle.