‘If our children live in fear, Hamas should live in fear’: Israel’s Culture Minister calls for ‘murderous group’s’ leaders to be assassinated in the wake of two-days of rocket fire and airstrikes

An Israeli government minister has called for Hamas leaders to be assassinated in the wake of this week’s violence and exchange of fire in Gaza.

Culture Minister Miri Regev demanded state-sanctioned targeted killings of leaders of the Palestinian Islamist group, saying ‘if our children live in fear, then Hamas should live in fear’.

Her comments followed two days of fighting, beginning with an alleged ‘180 rockets and mortars’ being fired from the Hamas-controlled Gaza Strip on Wednesday, which saw Israel respond with airstrikes.

Today, both Hamas and Israel appear to be honouring a cease-fire allegedly negotiated by Egypt. 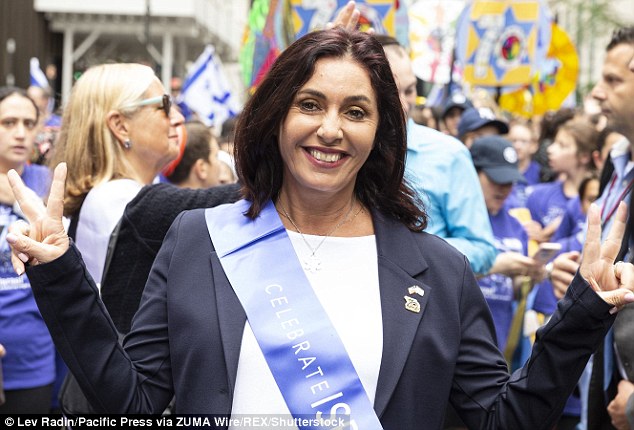 Controversial: Culture Minister Miri Regev called for state-sanctioned assassinations of Hamas leaders in the wake of this week’s exchange of fire between Gaza and Israel

Palestinian Hamas-run media reported that an Egypt-brokered deal had taken hold ‘on the basis of mutual calm’, however, Israel’s government has not confirmed such a truce.

Visiting local leaders in Israeli communities near the Gaza strip, Mrs Regev said: ‘The equation should be very simple: If our children live in fear, then the leadership of Hamas should live in fear.

‘We must go back to the policy of targeted assassinations of leaders of this murderous terrorist group,’ she told The Jerusalem Post.

Mrs Regev is a former Brigadier-general in the Israel Defense Forces and a former IDF spokesperson who has become known for her controversial political statements.

In 2012 the mother-of-three infamously declared Sudanese asylum seekers in Israel ‘a cancer on our body’.

She has been Minister for Culture and Sport since 2015 and has served as acting Prime Minister when Benjamin Netanyahu has been abroad. 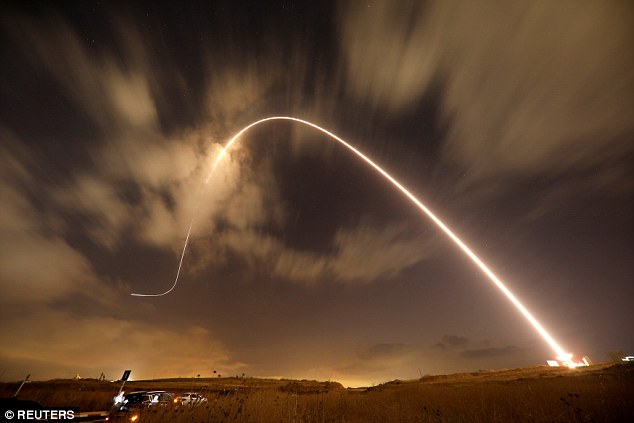 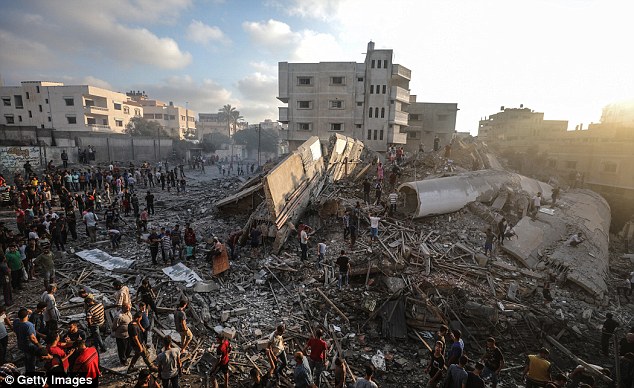 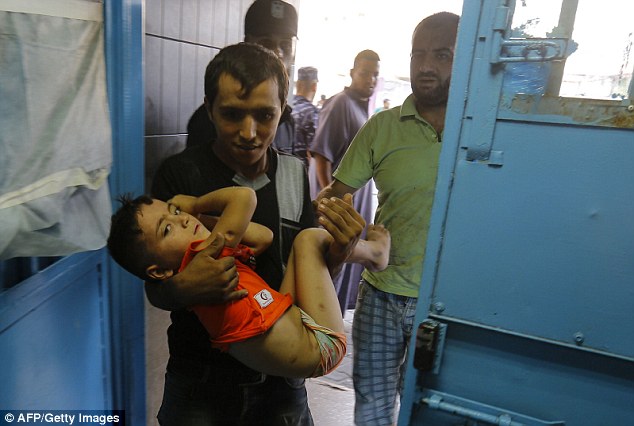 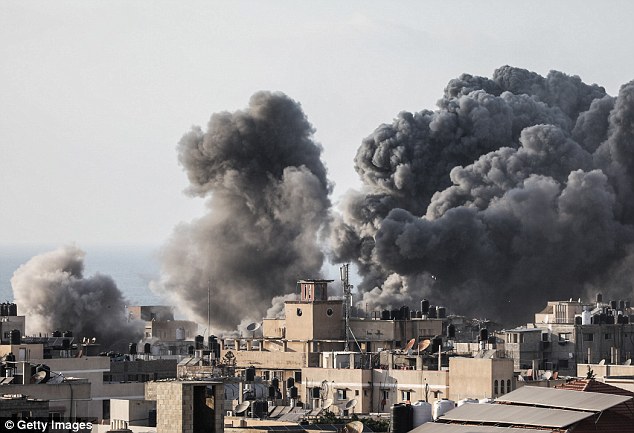 This week’s fighting saw Israel hit some 150 facilities belonging to Hamas in retaliation for ‘180 rockets and mortar bombs’ allegedly fired from the strip on Wednesday night.

The Israeli airstrikes overnight on Wednesday killed three Palestinians, including a 23-year-old pregnant woman and her 18-month-old daughter.

A source within Israel’s military warned Thursday that ‘a full-blown military confrontation in the Gaza Strip’ was near and its government could start evacuating citizens near the border.

Thursday evening, at least two rockets allegedly fired from the Gaza Strip landed in Israel on Thursday night, according to the country’s authorities, including just outside Beersheba.

Although nobody was injured, it marked the first time since 2014 that a rocket had penetrated that deep inside the country, according to the country’s media. 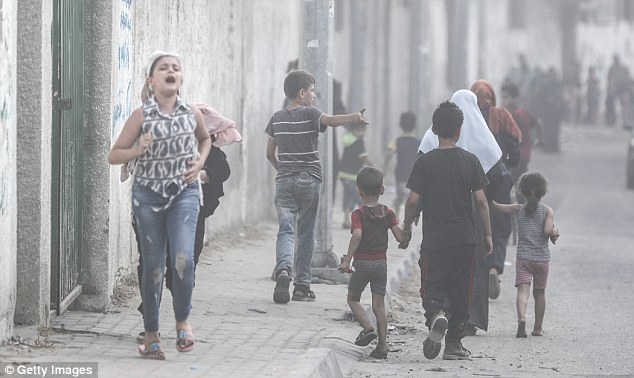 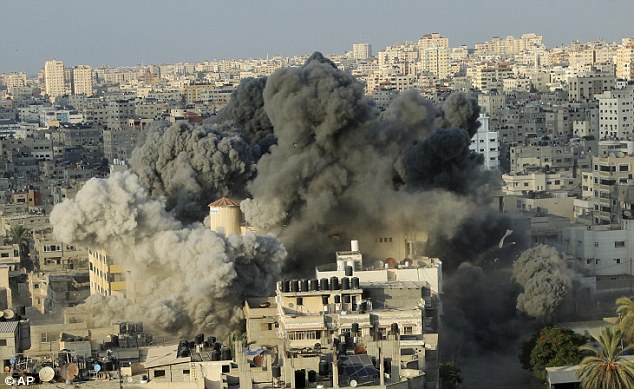 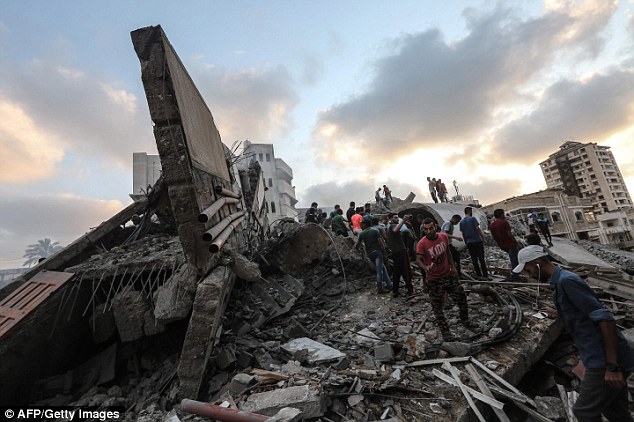 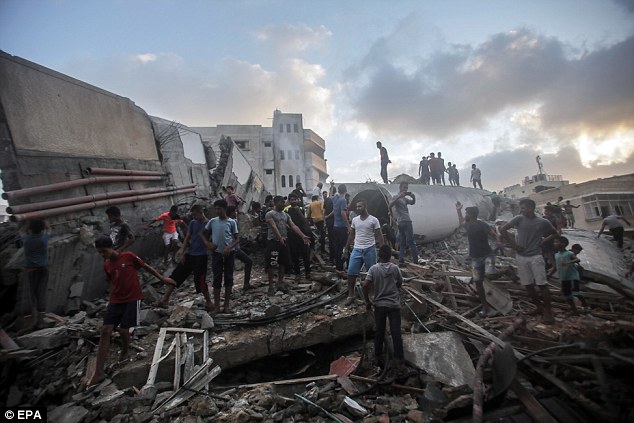 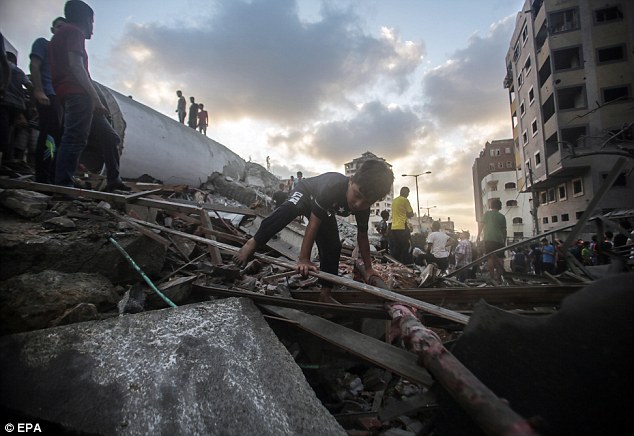 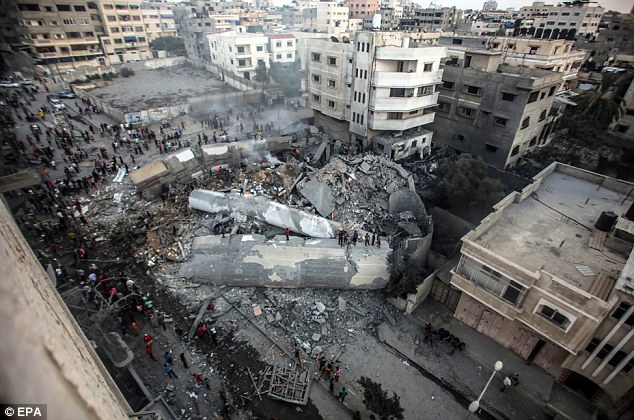 Shortly after, an Israeli airstrike flattened the five-story cultural center in the Shati refugee camp, a crowded neighbourhood of Gaza City.

The airstrike set off a powerful explosion and sent a huge plume of black smoke into the air, causing crowds to scream in panic. Medical officials said at least seven bystanders were wounded.

The building is home to a popular theatre and exhibits plays and other shows on a daily basis. An Egyptian-Palestinian cultural society also has an office in the building.

‘The deliberate targeting of a cultural center with airstrikes and destruction … is a barbaric act,’ said Hazem Qassem, a Hamas spokesman. He said the destruction of the Egyptian cultural office was ‘an Israeli attempt to sabotage’ the Egyptian cease-fire efforts.

The Israeli military said the building served as a Palestinian military installation. Hamas’ Interior Ministry, including its secret police, has offices in an adjacent site, but those offices were not hit.

Before tensions calmed, a senior Israeli Defence Force officer told the Times of Israel: ‘We are rapidly nearing a confrontation. Hamas is making serious mistakes, and we may have to make it clear after four years that this path doesn’t yield any results for it and isn’t worth it.’ 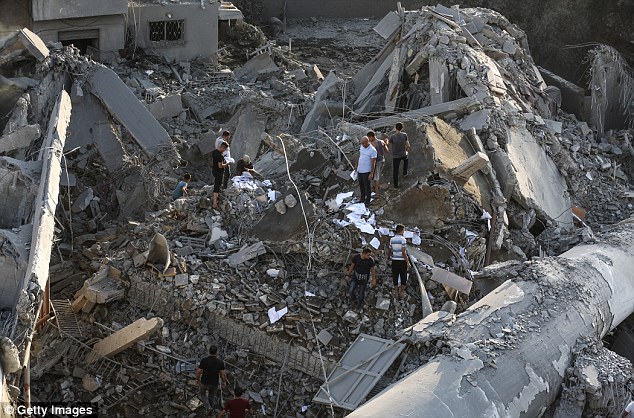 People inspect the debris of Said Al-Mashal Foundation for Arts and Culture building after Israeli forces conducted airstrikes, in the western part of Gaza City 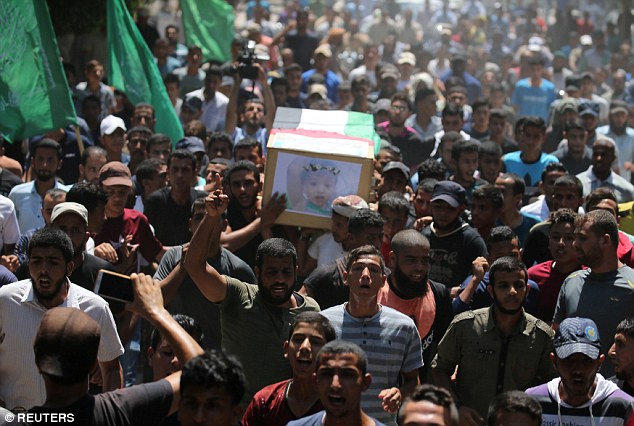 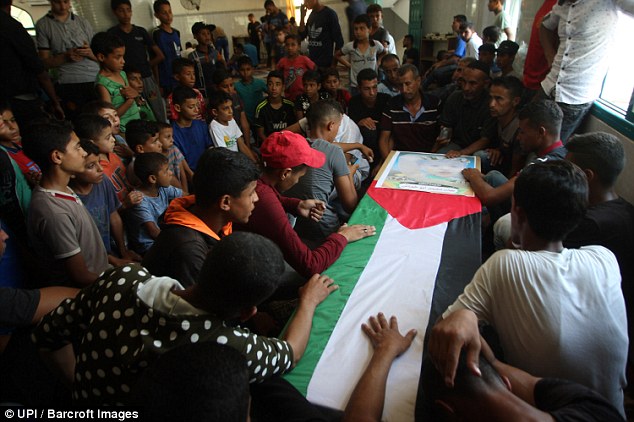 Mourners gather around the coffin, draped in a Palestinian flag, as the mother and daughter were carried through the centre of the strip following the Israeli bombardment 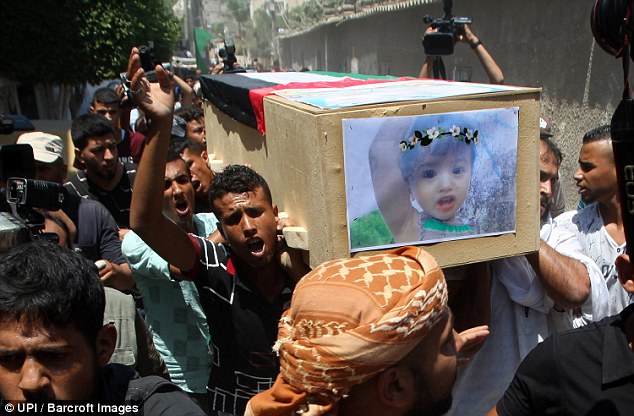 Palestinian mourners carry the bodies of 23-year-old Enas Khammash and her 18-month-old daughter Bayan, during their funeral in Deir Al-Balah 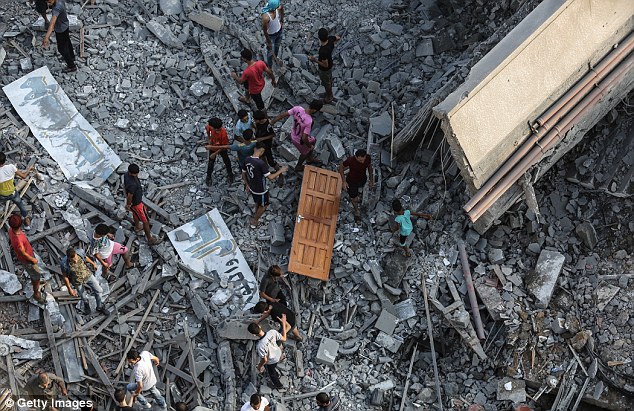 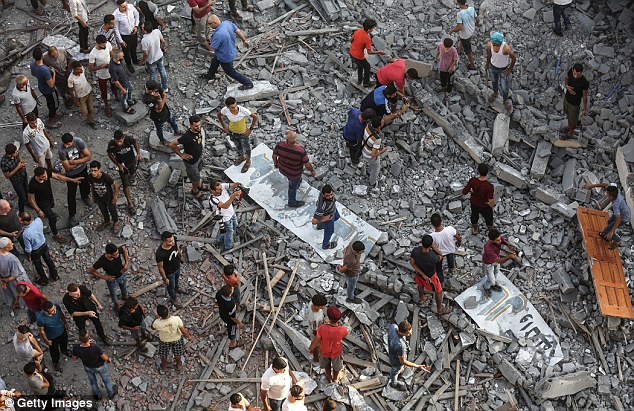 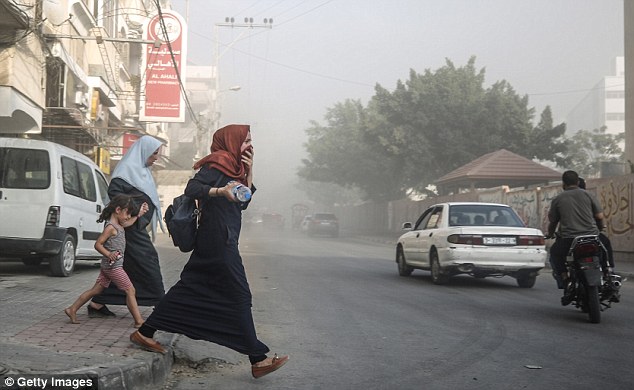 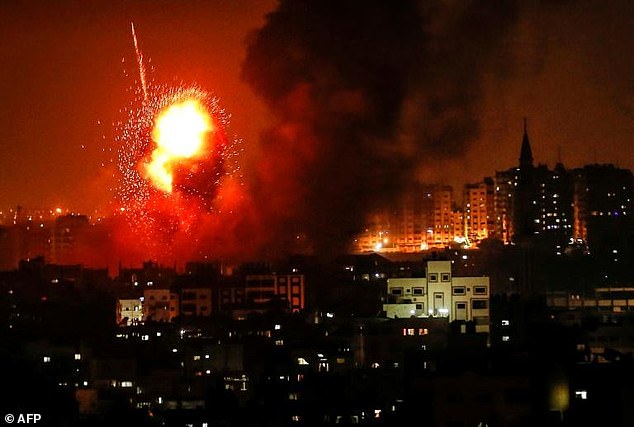 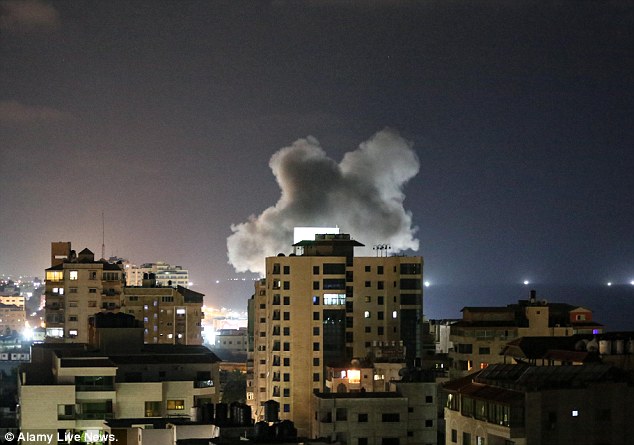 On Thursday, Mourners in Gaza carried the bodies of 18-month-old Bayan Khammash and her pregnant 23-year-old mother, Enas, after they died in an air strike.

The coffin was carried through Deir Al-Balah in the Gaza Strip, after Enas’ husband was injured in the bombardment, according to officials in the self-governing territory.

The United Nations late Wednesday called on the sides to step ‘back from the brink’. It was the third major escalation since July and came despite attempts by UN officials and Egypt to secure a long-term truce between Israel and Hamas, the Islamist movement that runs the Gaza Strip.

Israel and Hamas have fought three wars since 2008. In yesterday’s skirmishes, smoke plumes could be seen rising from Gaza City following the military’s announcement it was targeting ‘terror sites in the Gaza Strip’.

The strikes came after two rockets launched from the coastal enclave hit the town of Sderot, near Gaza’s northern border, police and the army said.

One person was lightly wounded by shrapnel while several others were treated for shock in Sderot, the United Hatzalah medical service said. 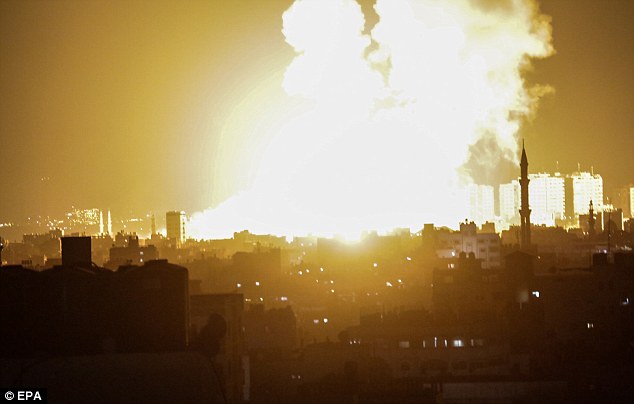 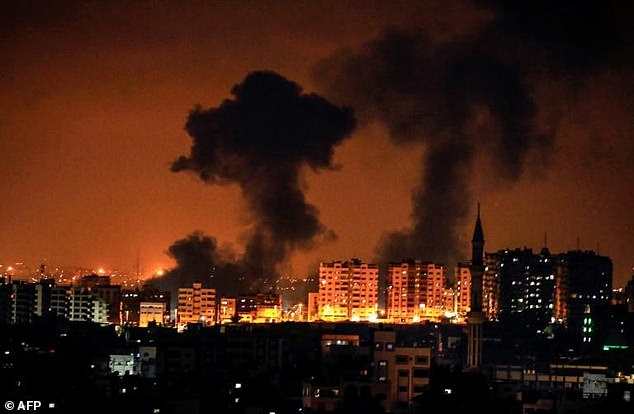 Smoke plumes rising following an Israeli air strike on Gaza City tonight. Injuries were reported on both sides of the conflict 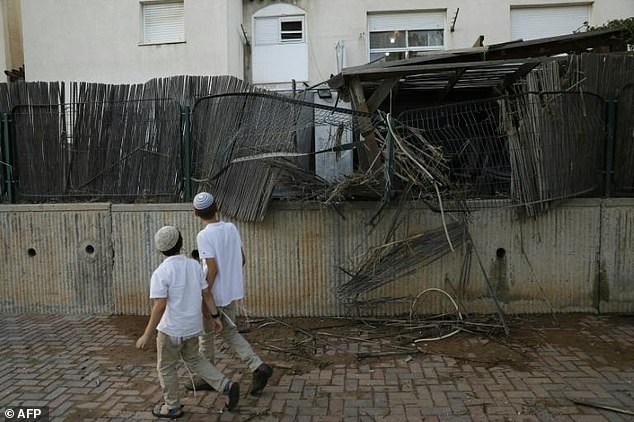 Sirens were sounded in several areas close to the border with Gaza, warning residents to seek immediate shelter, the Israeli army said.

‘As of now, 36 rocket launches were identified from Gaza towards Israel,’ the army wrote on Twitter. The majority hit open areas while four were intercepted, it said. Israel says it holds Hamas responsible for all fire coming from the long-blockaded coastal territory.

Israeli television broadcast images of a house and cars reportedly damaged by the rockets in Sderot. Parts of the town have been closed off and police bomb disposal units were at the scene of the strikes, a spokesman for the force said.

The strikes came after two fighters from the military wing of Hamas, which rules Gaza, were killed by Israeli fire on Tuesday.

Hamas warned Israel – with which it has fought three wars since 2008 – it would pay for the attack. The escalation comes after the Hamas leadership convened for a rare meeting in Gaza on Friday.

The gathering had raised hopes a deal for a lasting truce with Israel, with the backing of Egypt and the United Nations.

Clashes along the Gaza border since the end of March have seen at least 160 Palestinians killed by Israeli fire. One Israeli soldier has been shot dead by a Palestinian sniper.