New York: For nearly three decades, teaching yoga in Alabama’s public schools has been forbidden by the state’s school board.

One lawmaker, Jeremy Gray, has been trying to change that since 2019. He made progress on Thursday, when the state’s House of Representatives passed a bill that would override the ban. The bill, which was approved by a vote of 73-25, will soon be taken up by the Senate. 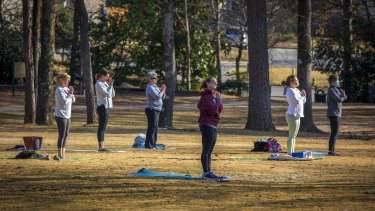 Gray, a Democrat representing Opelika, has taught and practiced yoga for years. He said that while some conservative legislators in the state might have opposed yoga because of its associations with Hinduism, officials on both sides of the aisle had been slowly warming to the idea.

“Most of the senators that I’ve talked to are OK with it,” Gray said. “A lot of people in their districts have reached out to them, and a lot of their wives actually do yoga. So I think it has a good chance of passing.”

His legislation would override a 1993 school board regulation that says that “school personnel shall be prohibited from using any techniques that involve the induction of hypnotic states, guided imagery, meditation or yoga.”

The yoga bill is far from the only issue on the docket for Alabama lawmakers. Gray also has other legislative priorities, such as providing clean water for schools and improving the state’s policies on expunging criminal records.

But because it hits at the intersection of some combustible issues — religion, culture and children’s education — the yoga bill has captured outsize news media attention. This year and last year, it was covered by multiple local, state and national news outlets, including The New York Times.

Eric Johnston, a legal adviser for the Alabama Citizens Action Program, or ALCAP, a church-supported group that holds substantial influence in the Legislature, said the group intended to fight the bill when it reaches the Senate.

Yoga is “a very important part of the Hindu religion,” he said. “As such, it does not need to be taught to small children in public schools.”

Gray pointed out that his bill would allow schools and students to make their own decisions about whether to offer or participate in yoga classes. It also says that public schoolteachers cannot say “namaste,” a greeting often used in yoga, or any kind of chant.

“You have to compromise in order to get that bipartisan support,” he said.

Gray came across the issue largely by chance. In a speech at a public high school in Auburn in 2019, he mentioned that yoga had helped him stay grounded while juggling responsibilities.

After his remarks, teachers told him that they had been unable to arrange exercises for their students. “That’s how I learned it was banned,” Gray said.

Around the time of the ban in 1993, parents in the state were raising concerns not only about yoga but also about hypnotism and “psychotherapeutic techniques.” According to an April 1993 article in The Anniston Star, one mother in Birmingham said her child had brought a relaxation tape home from school that made a boy “visibly high,” The Montgomery Advertiser reported.

But for Gray, a former football player, yoga has long been a useful part of his exercise regimen. The gentle stretches helped him cool down after practices, he said, while the breathing exercises strengthened his lungs. (That, he added, may have helped him recover quickly from a bout of COVID-19 last year.)

He introduced his first bill to challenge the yoga ban in 2019, but it quickly failed. His second attempt passed the House in 2020 but was put on the back burner because of the pandemic.

This time, Gray is optimistic about the bill’s prospects. He said a Republican senator, Tom Whatley, had agreed to carry the legislation forward in the Senate, where, like the House, Republicans have a majority. (Whatley did not immediately respond to an email seeking comment on Friday.)

Johnston, the adviser for ALCAP, which opposes the yoga bill, said he did not oppose the practice of yoga. “I think yoga is widely accepted, and even some Christian churches have yoga classes,” he added.

But he framed the practice as inseparable from Hinduism, and therefore subject to the constitutional separation of religion and state. “You cannot have any kind of religious activities in elementary schools,” he said.