EXCLUSIVE: British Jewish gran, 82, tells how Jeremy Corbyn looked on as she was called ‘Zionist traitor piece of sh**’ by jeering anti-Semitic mob in Parliament 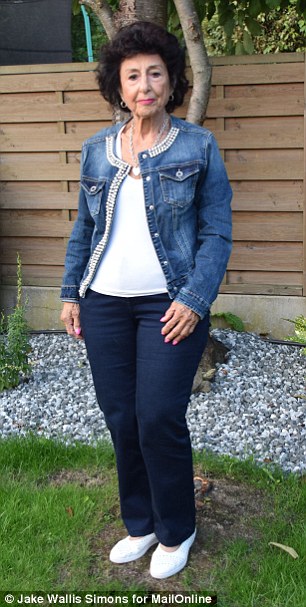 A Jewish grandmother has told how she was abused by a ‘loud jeering mob’ which called her a ‘Zionist traitor’ and a ‘piece of sh**’ at a meeting at Parliament while Jeremy Corbyn looked on.

Frail pensioner Marina Vine said that the Labour leader sparked the abuse when he told her to ‘shut up and sit down’ as she tried to make a point in defence of Israel, something a Labour spokesman has denied.

Mr Corbyn then called police to remove her. But officers ended up having to protect Mrs Vine, and escorted her out of the House of Commons as she was abused by a ‘loud jeering mob’ who targeted her with vile, anti-Semitic abuse.

MailOnline last week published a disturbing video from the 2013 meeting, showing a distressed Mrs Vine telling an officer that she had been called ‘filthy names’ by the man behind her.

In the clip, Mr Corbyn can be seen at the front of the room, shouting for her to ‘keep quiet’. In the foreground, a man identified as an IRA supporter, can be seen smirking as tempers rise.

The altercation followed a succession of inflammatory remarks made by speakers.

One had called Israel ‘evil’, while another said Israel should ‘go to hell’. 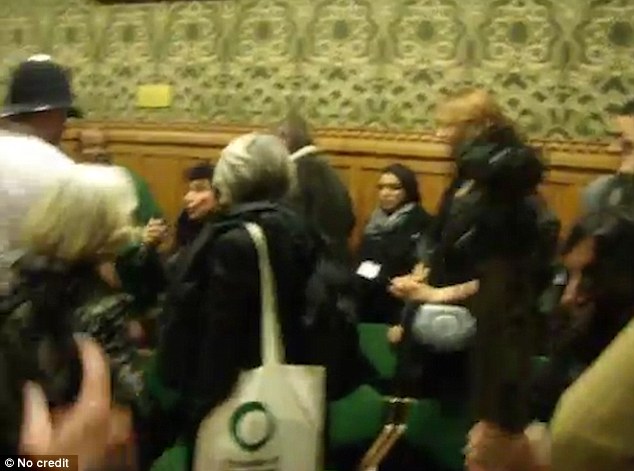 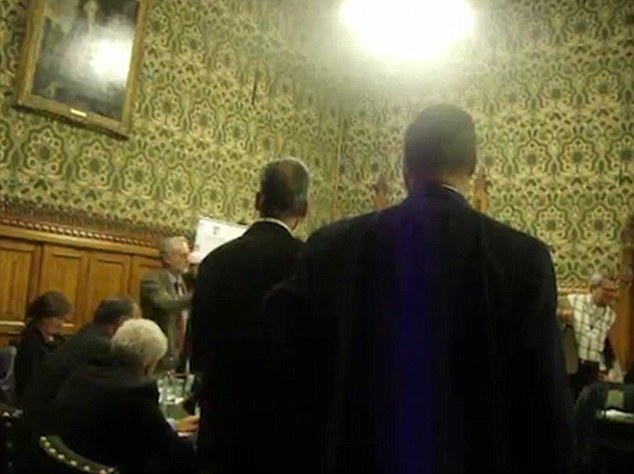 Labour leader Corbyn sparked the abuse when he told Mrs Vine her to ‘shut up and sit down’ as she tried to make a point in defence of Israel, she claims, something Labour today denied 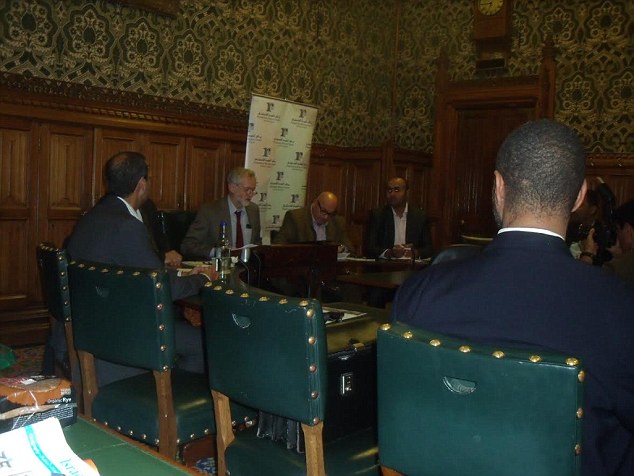 Jeremy Corbyn, centre, spoke at the event, where three politicians spoke who had been suspended on charges of anti-Semitism

Speakers included three MPs who have been suspended for alleged anti-Semitism – one was Lord Ahmed, later suspended from the Labour Party, who blamed a driving conviction on a Jewish conspiracy – and Manuel Hassassian, representative of the PLO.

Mrs Vine said: ‘I lived through the war and I’ve never been so scared in my life. To think that a British Jewish lady needed police protection in our own Parliament, while Mr Corbyn looked on. It’s shocking.’

She added: ‘Years ago, people used to shout at me in the street, saying Jews should clear off to Palestine. Now we get abuse because some Jews actually did it.’

The grandmother-of-four’s family has lived in Britain for more than 150 years. Her husband was wounded fighting in Italy in WWII, after lying about his age to volunteer for the British army when he was 17.

His father fought for Britain in WWI, and was left deaf by artillery shells. ‘My family are huge royalists. We love the Queen and we absolutely love being British,’ said Mrs Vine, who wrote a poem for the Queen to mark her jubilee.

‘At our synagogue, we say a prayer for the Royal Family every week, like most synagogues in Britain. We are so proud to be British, and for Mr Corbyn to trigger such vile abuse against us is disgraceful.’

The meeting was one of a number hosted by the Labour leader for the Palestine Return Centre (PRC), which caused outrage when it invited the Hungarian fascist and Jobbik MEP Krisztina Morvai, a close ally of BNP figurehead Nick Griffin, to speak at one of its anti-Israel rallies.

Mr Griffin has recently given Mr Corbyn his support over the latest anti-Semitism row.

This PRC also staged the event where the Labour leader made his notorious remarks about British Zionists not understanding ‘English irony’, as revealed by MailOnline last week.

‘This was my first meeting where Mr Corbyn was in charge,’ Mrs Vine said. ‘I’m very engaged with community issues and politics and I’m interested in Israeli history.

‘Someone told me about it and I decided to go along, especially as it was in the House of Commons. I thought it would be informative. 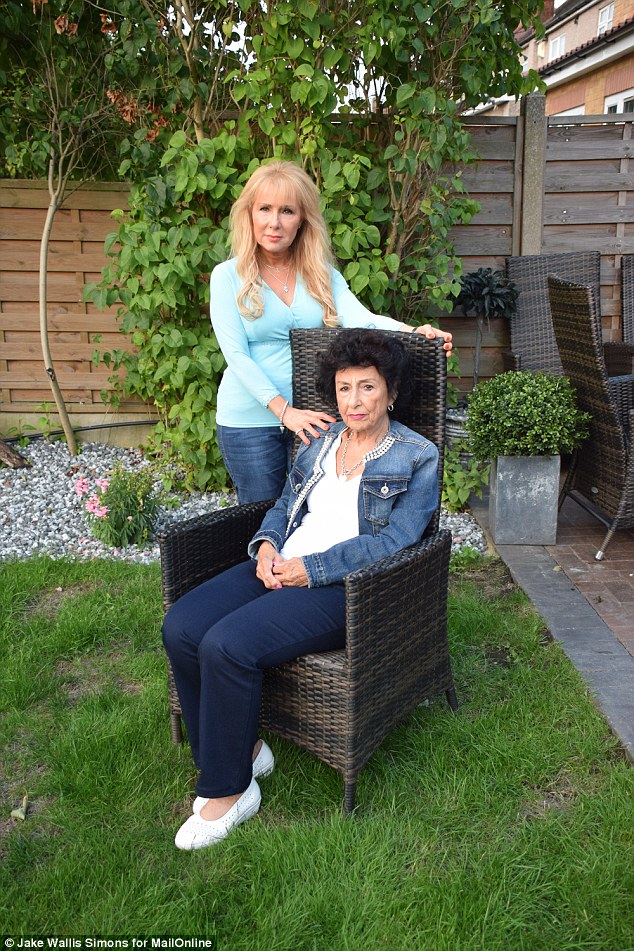 Mrs Vine (pictured at home with her daughter Shelley Hart) said that when police arrived they had to escort her to Westminster tube station for her own safety. She added: ‘I lived through the war and I’ve never been so scared in my life.’

‘I couldn’t believe it. It was the most undemocratic, unbalanced meeting I’d ever attended. Israel was compared to Nazi Germany, and there was talk of the ‘Jewish lobby’.

‘I don’t normally speak up, as I’m not very good at speaking. But I just felt so sick that I had to say something.

‘Mr Corbyn wouldn’t allow me to speak and closed the meeting without giving me a say. When I tried to speak, he told me to shut up.

‘I said, ‘no, I won’t shut up. This country fought hard for freedom and the right to free speech. And an absolute disgrace to be denied that in the House of Commons, of all places’.’

At that point, Mrs Vine said, Mr Corbyn’s supporters turned on her, calling her ‘scum’, ‘sewage’, a ‘piece of sh**’ and ‘fascist, Zionist garbage’.

‘I was shaking and very distressed,’ she said. ‘Mr Corbyn just looked on. He called the police to remove me, but they ended up having to protect me.

‘They escorted me all the way to Westminster underground. I had to wait for almost an hour before I went down to the platform because the anti-Semites were waiting there.’

Mrs Vine since made a number of complaints to the Commissioner for Standards, but did not feel that she received an adequate response.

It is an outrage, she said, that these sort of ‘one-sided and hate-filled events’ are allowed to take place in Parliament.

‘When I heard about Margaret Hodge confronting Mr Corbyn, I thought she was a kindred spirit,’ Mrs Vine said.

‘It’s appalling that it takes elderly women to stand up to this racist hate while Labour MPs remain shamefully silent.’

She added: ‘We know what happens when this sort of hatred is allowed to escalate. It has happened before.

‘I’d like everybody to know that it took a little old lady to stand up to Mr Corbyn because Labour MPs haven’t got the courage.’

Denying Mrs Vine’s claims relating to Corbyn, a Labour Party spokesperson said: ‘As the recordings clearly show, Jeremy said nothing of the kind. He in fact said, repeatedly, ‘can you all leave the room quietly please?’ – in an effort to defuse the situation and close the meeting.’