A Federal Court judge has blasted acting Immigration Minister Alan Tudge for leaving a man in immigration detention after he was granted a protection visa, in the latest in a series of excoriating decisions about the federal government's immigration policy.

In a decision on Wednesday, Justice Geoffrey Flick said Mr Tudge had "unlawfully deprived a person of his liberty" and his "conduct exposes him to both civil and potentially criminal sanctions, not limited to a proceeding for contempt". 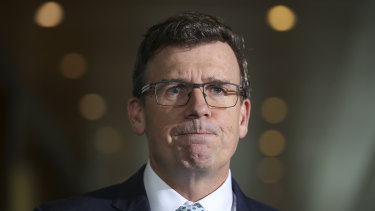 "In the absence of explanation, the Minister has engaged in conduct which can only be described as criminal," Justice Flick said.

Lawyers for Mr Tudge had asked the Federal Court to quash a decision of the Administrative Appeals Tribunal in March this year to grant a protection visa to a citizen of Afghanistan.

The man, of Hazara ethnicity, arrived in Australia in 2012 and applied in 2016 for a safe haven enterprise visa, a five-year visa that requires the holder to work or study in regional Australia to apply for another visa when it expires.

A delegate of the minister refused that application on character grounds, on the basis the man had been convicted in March 2018 of an offence carrying a sentence of more than a year.

The man successfully sought a review of the decision in the AAT, which took the unusual step of granting a protection visa on March 11 rather than remitting it to the minister for reconsideration.

On March 17, Federal Court Justice Michael Wigney ordered the man be released from immigration detention and said the minister "or officers in his Department, cannot simply ignore, or decide to give no effect to, a decision of the Tribunal simply because they do [not] like it or believe it is wrong".

The man was released in March from the Yongah Hill Immigration Detention Centre in Western Australia.

On Wednesday, Justice Flick said that, even though legal error on the part of the tribunal had been established, the minister should be "denied the fruits of his success" because the man should not have been kept in detention after the visa was granted.

"The Minister cannot place himself above the law and, at the same time, necessarily expect that this Court will grant discretionary relief. The Minister has acted unlawfully," Justice Flick said.

Justice Flick said the fact the minister had a "personal dislike of the Tribunal decision" did not allow him to ignore it.

A spokeswoman for Mr Tudge said: "The minister strongly rejects any suggestion of improper conduct in these proceedings.

"The minister is considering the reasons for the court’s decision and options for an appeal. Therefore, it would not be appropriate to comment further."