Planning to turn America to ash? Laughing Kim Jong Un puffs on a cigarette as he is dwarfed by a smoke cloud while supervising test of new missile that is harder to detect and can reach mainland US

North Korean leader Kim Jong Un puffed on a cigarette and laughed as he supervised the test of a ‘high-thrust solid-fuel motor’ for a new strategic weapon on Thursday.

State media said the development could hand the despot a more mobile, harder-to-detect arsenal of intercontinental ballistic missiles that can reach the mainland US.

Thursday’s ‘static firing test’ of a missile engine at the country’s northwest rocket launch facility was the first of its kind in North Korea, the official Korean Central News Agency reported.

It said that the test provided ‘a sure sci-tech guarantee for the development of another new-type strategic weapon system.’ 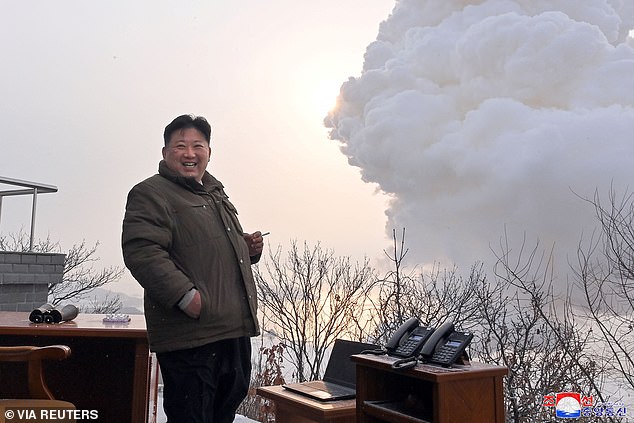 Laughing North Korean leader Kim Jong Un puffs on a cigarette as he tests a new strategic weapon at the launching ground in Tongchang, with a set of phones beside him 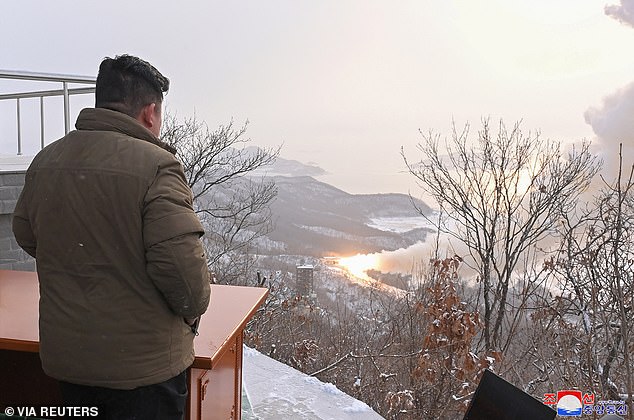 Kim overlooks the launch, which experts say North Korea may use to try to negotiate sanctions relief with the US

Kim praised scientists and technicians over the test, saying he expected the new weapon would be built ‘in the shortest span of time,’ KCNA said.

North Korea is likely referring to a solid-fueled ICBM, which is among an array of high-tech weapons systems that Kim vowed to introduce during a major ruling Workers’ Party conference early last year.

The latest motor test showed that North Korea is determined to carry out Kim’s vows to develop such sophisticated weapons systems despite its pandemic-related domestic hardships and US-led international pressures to curb its nuclear program.

Some experts say North Korea would eventually use an expanded arsenal to seek sanctions relief and other concessions from the United States.

‘We’d been expecting a test of this kind for a while. Large-diameter, solid propellant rocket motors will enable North Korea to deploy larger submarine-launched missiles and, more importantly, more survivable and responsive intercontinental-range ballistic missiles,’ said Ankit Panda, an expert with the Carnegie Endowment for International Peace. 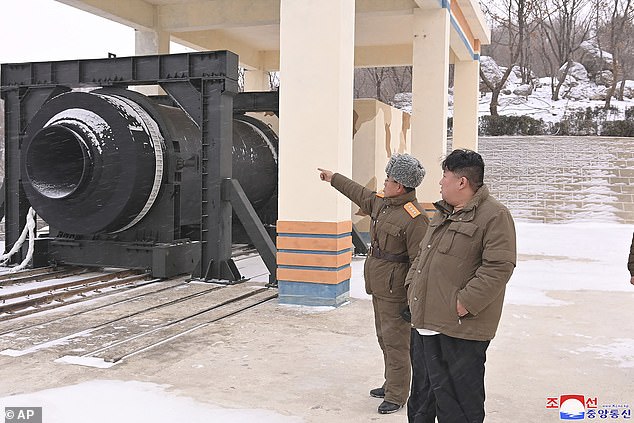 In this photo provided by the North Korean government, North Korean leader Kim Jong Un, right, supervise what it says a test of ‘high-thrust solid-fuel motor’ at the Sohae Satellite Launching Ground in North Korea Thursday 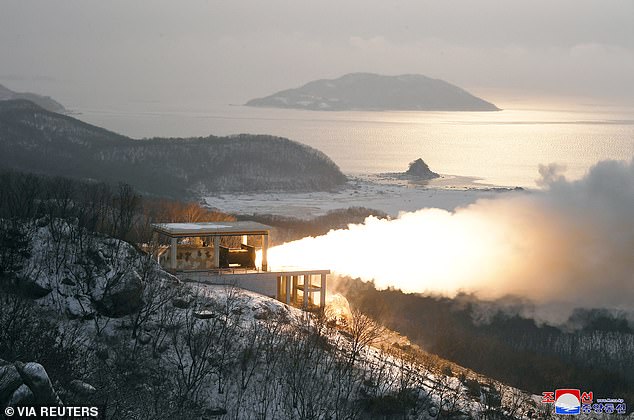 ‘I wouldn’t be surprised if they’d look to do additional testing and development of these motors before moving to flight-testing.’

The fuel in solid-propellant rockets is already loaded inside, which helps to shorten launch preparation times, increase the weapon’s mobility and make it harder for outsiders to detect what’s happening before liftoff.

North Korea already has a growing arsenal of short-range, solid-fueled ballistic missiles targeting key locations in South Korea, including US military bases there.

KCNA said Thursday’s test was meant to verify specific technical features of the motor based on ‘the thrust vector controlling technology’ and that the test showed all the technical indices proved its reliability and stability.

The technology refers to an ability to allow rockets to steer directions with the gimballing of exhaust nozzles, some analysts said after examining North Korea-dispatched photos of the test.

That’s a much more advanced method of thrust vectoring than a previous method traditionally used on the North’s shorter-range solid motor missiles, said Joseph Dempsey, research associate for defense and military analysis at the International Institute for Strategic Studies.

He said while more efficient gimbaled nozzles may help maximize range, they are also more suitable for an ICBM. 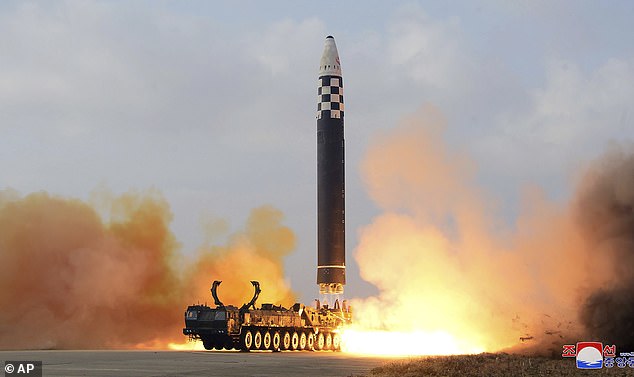 ‘However what other technical challenges remain and how far away a flight test of such a system is remains unknown.’

But the country has likely experienced ‘considerable trials and errors’ before Thursday’s test because it’s technologically more difficult to make large-sized solid-fueled motors than liquid-fueled ones, said Chang Young-keun, a missile expert at Korea Aerospace University in South Korea.

If the North’s motor test made the reported progress as it claimed, the country would be able to test-fire a solid-fueled ICBM within the first half of next year, Chang said.

If North Korea uses the technology to build an ICBM-class missile that can be fired from a submarine, that would equip the North with a threatening secondary, retaliatory attack capability against the United States, he said.

The exact status of North Korea’s nuclear attack capability remains in secrecy, as all its intercontinental ballistic missile tests in recent years have been carried out at a steep angle to avoid neighboring countries.

Some experts speculate North Korea already has functioning nuclear-tipped missiles that can hit the entire US, given the number of years it has spent on its nuclear program.

But others say the country is still years away from acquiring such weapons, saying it has yet to publicly prove it has a technology to protect warheads from the harsh conditions of atmospheric reentry.