Instead, he hawked digital trading cards with his head atop cartoon super-hero figures in an NFT market that’s already sagging.

Trump said on his Truth Social platform that the “Donald Trump Digital Trading Card collection” could be collected like baseball cards and stored digitally (a NFT, or non-fungible token, is essentially a unique digital file). The “cards” cost $US99 ($147) each and people who buy them are also entered into a sweepstake for prizes including a golf outing with the former US president. 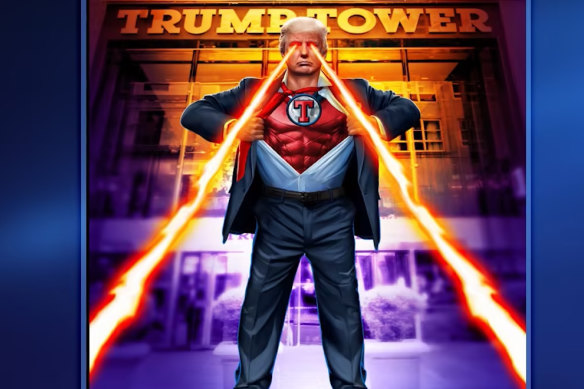 They are being offered by NFT INT LLC, which says on its website that they are not connected to Trump’s 2024 presidential campaign and the company is not owned, managed or controlled by Trump, his company, or their affiliates. Trump gets paid under a licence for use of his name and likeness, according to the website.

Trump has over the years licensed the Trump brand to a number of third-party, and mostly failed, products including steak, vodka, an airline and a university.

The market for NFTs has fallen sharply in recent months along with the rest of the crypto universe, which has endured a series of spectacular blow-ups including the November implosion of Sam Bankman-Fried’s FTX digital-asset empire. 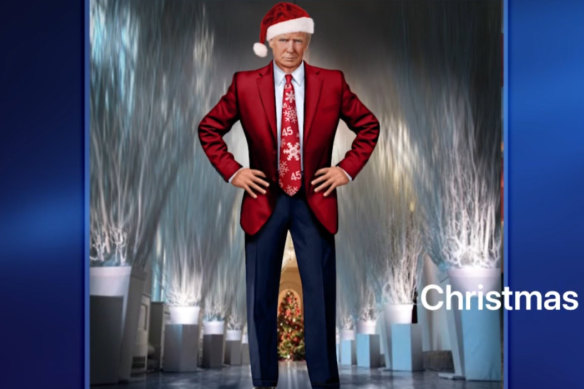 There’s even a Christmas card within the collection.

Trump had teased the announcement with a post on his social platform on Wednesday depicting himself as a Superman-like character standing in front of Trump Tower with lasers shooting from his eyes saying, “America needs a superhero”. In crypto parlance, laser eyes are a bullish signal and that picture is now one of the available digital cards.

There was speculation that the “major announcement” would be something dramatic like Trump returning to Twitter or running to be House speaker.

Trump announced on November 15 that he would wage a 2024 White House bid.

Trump’s comeback run has so far been marked by one downturn after another, including being blamed for a disappointing Republican midterm showing; the growing popularity in the party and among voters of Florida Governor Ron DeSantis; the public dinner he held with two well-known anti-Semites; deepening legal woes; subpar online fundraising and polls showing him losing favour among his base.

President Joe Biden took a jab at Trump on Twitter, noting that he, too, had some “MAJOR ANNOUNCEMENTS,” over the last couple of weeks, including signing the Respect for Marriage Act and securing the release of basketball star Brittney Griner from a Russian prison.

Shortly after his NFT announcement, Trump posted a video to his social site to outline what he described as a platform to “reclaim” the right of free speech should he retake the White House in 2024.