Unite leader Len McCluskey was forced to admit yesterday the cost of his union’s controversial luxury hotel and conference centre has trebled to nearly £100 million.

The statement by Britain’s most powerful union leader came after he was challenged over the issue at a crisis meeting of the union’s executive in London.

Mr McCluskey said the cost of the union’s hotel and conference centre in Birmingham had risen to £98 million. 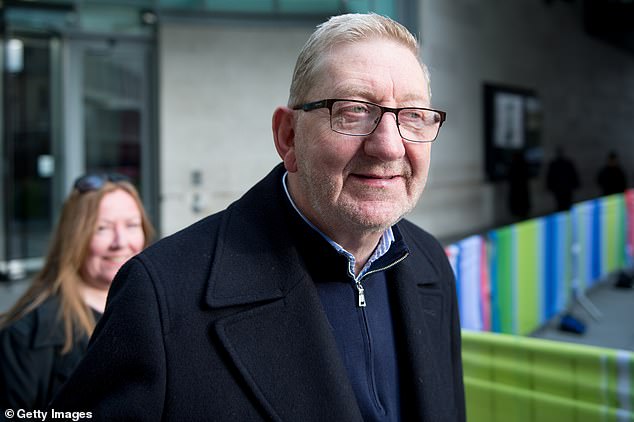 Len McCluskey, the General Secretary of Unite, admitted the cost of his union’s controversial luxury hotel and conference centre has trebled to nearly £100 million

Union insiders say the initial estimate was £35 million – although according to one report it was as low as £7 million.

Mr McCluskey, the General Secretary of Unite, yesterday blamed the increase on the union’s decision to pay top wage rates to the workers who built it.

The showdown with the Unite executive came amid a growing row over the hotel and conference centre contract with the Flanagan Group of Liverpool, headed by businessmen Paul Flanagan.

Merseyside Police is investigating the firm amid an inquiry into the sale of council land – and Mr Flanagan himself was arrested in September.

Another contract for the hotel project went to a company owned by David Anderson, the son of Liverpool mayor Joe Anderson.

Both men were also arrested by Merseyside Police last year. There is no suggestion that the Unite contract is linked to the police inquiry.

There is also no suggestion of any wrongdoing in the decision to award the contract to The Flanagan Group – or that Mr McCluskey had anything to do with the tendering process.

Defiant Mr McCluskey told yesterday’s meeting said the union should be congratulated for the money spent on the scheme.

It was determined not to use the ‘shabby practices’ and low pay common in the building industry.

He also claimed construction costs had soared in Birmingham.

Mr McCluskey said tendering for contracts to build the hotel conference centre had been handled properly.

He added: ‘We take the management of our members money seriously.’

Criticism of the project was part of a ‘smear campaign’ against the union, he said.

But Mr McCluskey’s explanation for the huge increase in the cost of the project was rejected by one of his Unite critics.

They said: ‘McCluskey has admitted the union’s worst kept secret: the cost of the hotel and conference centre is out of control.

‘To blame high labour costs is nonsense: that should have been factored into the deal with Flanagans from the outset.’

The furore over the deal was first revealed by the Daily Mail in December.