Let’s get puzzling, Britain! The Mail already has the UK’s biggest puzzle pullout. Now to help you and your family through lockdown, there’s more

What an oasis in the day! That priceless moment when you sit down with the puzzle pages, pick up a pen and start filling in your favourite brain-teaser.

For me, it’s the crossword. I’d love to tell you that I race through the clues like a word-crunching automaton, but my colleagues at Countdown would howl with derision.

The truth is that I’m more of a dogged solver — I get my teeth into a clue and I chew on it. I ruminate. I ponder. I’ll put the paper down, make a start on preparing some lunch, with the clue still going round in my mind.

And more often than not, the answer will come to me when I’ve almost given up. But I find that so terribly satisfying. 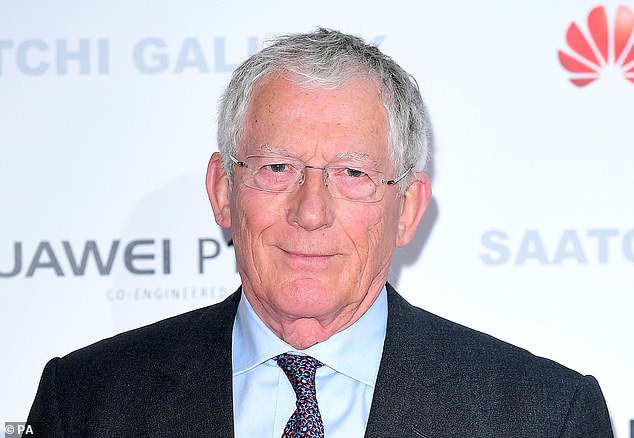 What an oasis in the day! That priceless moment when you sit down with the puzzle pages, pick up a pen and start filling in your favourite brain-teaser, writes Nick Hewer (pictured)

I feel inordinately pleased with myself as I spell out the last word on the grid, reassured in a small way that everything’s going to be all right. And if we all need one thing right now, it’s certainly reassurance.

That’s why I’m so delighted to announce that, from Monday, the Mail will be doubling what is already the biggest and most entertaining collection of puzzles you’ll find anywhere.

And there’s going to be something to absorb every puzzle fiend. I’m a traditionalist, so I turn to the General Knowledge Crossword, the Master Quiz and the Quick Quiz.

It’s always fun to try a new one, especially when you discover they are not as daunting as they look. Train Tracks is quite addictive, and Zygolex is a completely fresh take on the quickie crossword.

And from Monday there will be even more ways to boggle your mind, with the addition of my childhood favourite, Battleships, and the inventive Nonograms. 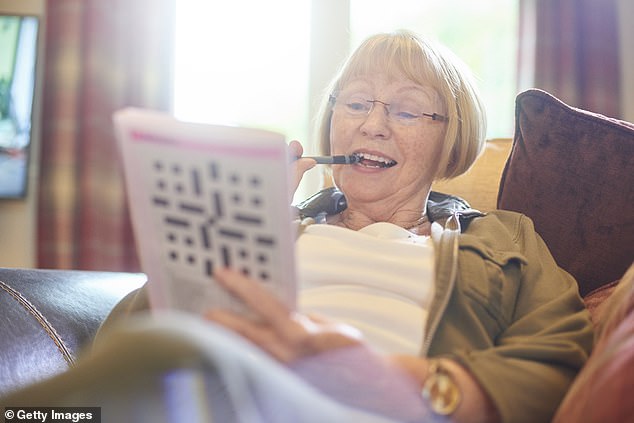 My sister-in-law Sarah, for example, says that a good puzzle is almost a ritual for her, a guaranteed few minutes of calm during the busiest days [File photo]

If you haven’t discovered all of these yet, I urge you to be adventurous. You won’t regret it.

I believe there is growing evidence to support the theory that regular mental exercise has many health benefits, not only in keeping the grey matter ticking over, but also for general physical wellbeing.

I’m not a neuroscientist, so I have to take this wisdom on trust, but I am firmly of the opinion that puzzles are especially valuable at times of stress — and medical science agrees. A doctor friend has assured me that quizzes of all sorts, such as Countdown and the teasers in the Mail, are the best antidote to lockdown blues. That’s because they offer routine as well as an entertaining distraction.

My sister-in-law Sarah, for example, says that a good puzzle is almost a ritual for her, a guaranteed few minutes of calm during the busiest days.

Her partner, Malcolm, is a crossword maestro who often gets to work on the cryptic clues almost as soon as he wakes. It’s more important than a morning cup of tea to get his brain working, he says.

I asked Sarah what the attraction of puzzles is for her and she said: ‘It’s very simple — they’re relaxing, they’re calming, competitive if you’re playing with a partner or another family member, they’re intellectually challenging and they become part of the structure of the day.’

The contestants I meet on Countdown certainly prove the notion that intelligence increases when the brain is constantly challenged. I’m in awe of how smart and mentally agile they are.

Some of them conjure combinations out of the random letters to create words that even our dictionary genius Susie Dent doesn’t know.

But most special of all, when I settle down to tackle a puzzle, I know that I’m going to be able to take a breather from the anxieties of the day.

The television news is off and I’m not looking at the headlines. We’ve all got too many things to worry about in lockdown, and every one of us deserves a break.

Give yourself that relaxation, focus on a clue or a number and let everything else recede. Your brain will benefit from it and so will your mental health.

Right now, what the world needs more than anything is SPUZLEZ (anagram, seven letters).

Step-by-step, how to tackle one of our addictive new puzzles

In these picture logic puzzles — which start in Monday’s eight-page puzzle pullout — shade in squares to reveal the hidden image. The numbers along the bottom row and rightmost column will tell you how many consecutive squares you have to fill in that row or column. Here is an example: 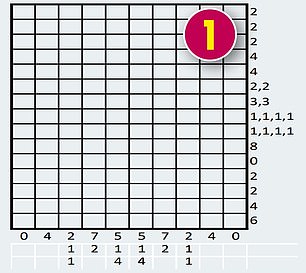 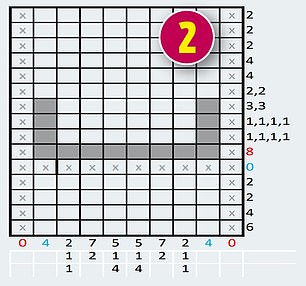 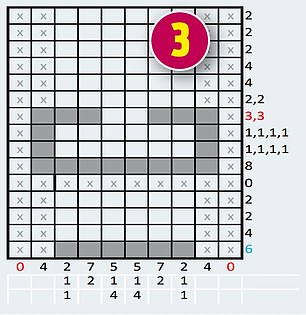 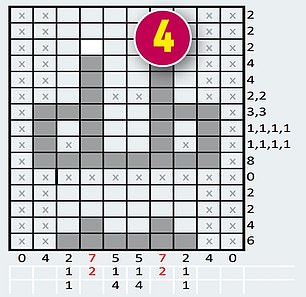 Step 1: Look to the right of the grid — the numbers describe how many squares to shade in, from left to right.

For example, 3,3 means there will be two blocks of three shaded squares in that row, and the blocks will be separated by at least one blank square.

At the bottom, 5,1,4 means there will be three blocks in that column of five, one and four shaded squares respectively.

Step 2: Start with the big numbers. The 8 is our biggest here, and the block of eight shaded squares must be in the middle, because 0 is given as a hint for the first and last column.

Take note of which squares stay blank — it can be helpful to mark them with crosses and this will show you how to proceed.

You can now shade in the squares on the two columns with 4 given as a hint. These blocks of shaded squares are the only ones found in their columns, so they must form a link with the eight shaded squares that have already been filled in, and we now know their position as they are hemmed in below by blank squares marked with crosses.

Step 3: Try to deal with the big numbers, and anything you find by a process of elimination. The block of six shaded squares on the bottom row is now forced due to the crosses produced by the previous step. There are already two squares shaded in the row with the hint 3,3, so we can deduce the final shaded squares for each of those blocks.

Step 4: The next big numbers come in the columns with the given hints of 7,2. You can fill in the blocks of two at the bottom due to the completion of the shaded squares in the final row. In each column, the block of seven has to link the upper two shaded squares — these two shaded squares cannot exist separately as only two hint numbers are given for these columns (7,2). The further you get in a nonogram, the more clues you have — what is the image? A nose and mouth, maybe?

Our brilliant new competition is fun for all the family.

So if you love a riddle or can’t resist a mind-tickling teaser, don’t miss our fabulous new £64,000 Trivia Chase game, which starts in the Mail today.

Following on from the irresistible Daily Mail Treasure Hunts, which 250,000 readers entered last summer, our Trivia Chase is bigger and better because you can scoop a £1,000 daily prize AND a £10,000 weekly prize. Trivia Chase couldn’t be easier to play.

In each day’s paper, we will print a fiendishly fun riddle from one of six categories — Books, Geography, History, TV, Science and Sport. Simply solve the riddle, then note down the first letter of your answer.

Call or text us with that correct single letter and you will be entered into a draw for that day’s £1,000 prize (for example, if your answer is ‘Jane Austen’, send us the letter ‘J’). The weekly game runs from Saturday to Friday.

To be in with a chance of winning the weekly £10,000 prize, collate the first letters from your answers to each daily riddle. Your six letters will form an anagram — unscramble it using the clue in Friday’s paper and you will have your final answer.

When you have your final answer, you can enter the weekly draw by phone, text or email — and you could scoop £10,000!

And if you’re stuck on one of our tricky riddles, ask friends and relatives for help because there’s nothing like a trivia quiz to bring everyone together! 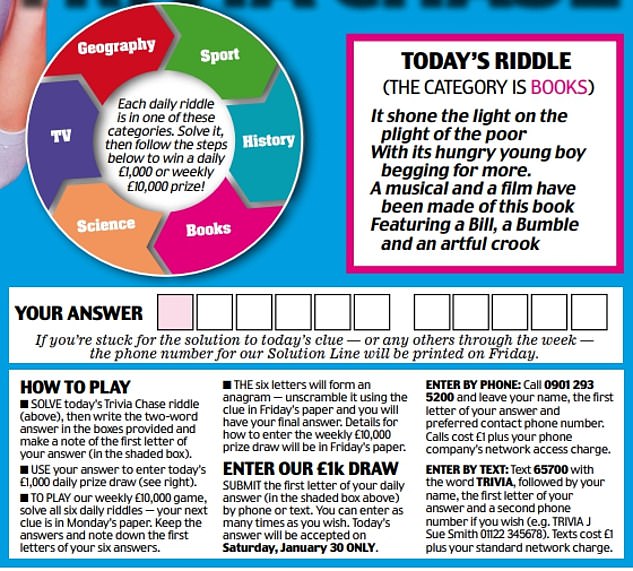