A popular pier-side restaurant and a former fishing co-operative face demolition in the tourism hotspot of Lorne as part of a controversial waterfront redevelopment plan.

The fishing co-operative building dates back to the 1950s, and the redevelopment plan has raised fears a key part of Lorne’s industrial heritage will be lost unless the project is revised. 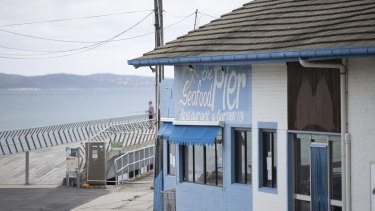 The building next to the pier in Lorne. Credit:Simon Schluter

But the plan’s proponents say the co-operative building, which is now closed apart from the restaurant, has fallen into disrepair and needs major maintenance.

Although the project at Point Grey was approved by the Surf Coast Shire, its immediate future hangs in the balance. A challenge in the Victorian Civil and Administrative Tribunal is under way and a decision is due to be handed down in April.

The proposed design includes a 160-seat restaurant, new outdoor space and lawns at the 1.7-hectare site on public land.

Long-time architecture academic Daryl Le Grew, who lives nearby at Eastern View, said the fishing co-operative was a crucial part of Lorne’s character and its heritage that should be preserved. 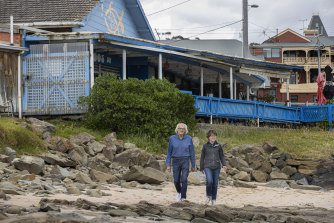 “You could open up the roof and let light in,” he said. “It could be an extraordinarily attractive building but still have a bit of a grungy look about it.“

The proposal also leaves an uncertain future for Pier Seafood Restaurant proprietor Spiros Gazis, who has run his business overlooking the water at the site for more than 25 years.

He has been told he can express interest in continuing to run a hospitality venue after the development is complete. But Mr Gazis said he would prefer to invest in refurbishing the building if he could be guaranteed a longer lease rather than the larger overhaul that is planned. 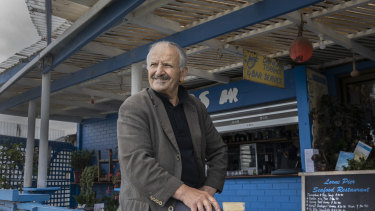 The $10 million development is seen as one of the first tests for the new Great Ocean Road Coast and Parks Authority, which is responsible for handling projects and protecting the environment as well as managing eight caravan parks in the region.

The federal government is supplying about $8 million, with the remainder coming from the authority.

“This is an exciting project that will deliver new facilities and open space for the local community and visitors to enjoy,” he said.

Mr Aitken said there would be a transparent public tender process for assigning the commercial lease to run the new restaurant on the site, which would be open to local and regional proposals as well as the current operators. 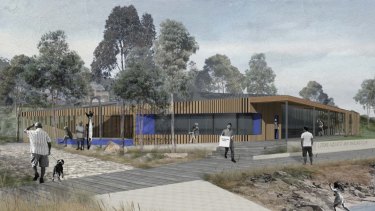 The design for the Point Grey precinct in Lorne.

Lorne resident and engineer Lawrence Baker mounted the challenge in VCAT, arguing the proposal would diminish the natural values of the site and failed to recognise its historic and cultural significance as a fishing industry hub.

“People don’t think it fits in that place,” he said. “It’s not suited to that site.”

Mr Baker said he gathered a petition opposing the project that was signed by about 1500 people, including 450 residents. But he acknowledged there was also some community support for the project.

Lorne resident Penny Hawe said there had been too few opportunities for widespread consultation that would have given residents a better understanding of how the community felt.

However, the Great Ocean Road Coast and Parks Authority insisted community consultation and feedback was an important part of the process and had been included in the final design.

Lorne Historical Society president Peter Spring sits on a creative council for the project. He said there was debate in the community about whether the building could be saved but insisted the heritage must feature in the final project.

“That’s more important than the retention of the building,” he said.

Mr Spring said the creative council was meeting regularly with the authority and the community’s views were being heard.

“It seems to be moving in the right direction with good faith.“

Liberal MP for Polwarth Richard Riordan, whose electorate includes Lorne, said he was concerned the project would become a “maintenance nightmare”.

At the end of each day, we’ll send you the most important breaking news headlines, evening entertainment ideas and a long read to enjoy.  Sign up here.